As a long-time lover of cartoons and animation, it's always disheartening when a near-masterpiece of the genre goes unappreciated. Such is the case with The Iron Giant (1999), a genuinely touching, funny, and charming tale of a boy and his fifty foot-tall robot. After mysteriously crash-landing on Earth and eventually befriending eleven year-old Hogarth Hughes, this massive machine faces the threat of a 1950's-era world already paranoid of the atom bomb and Russia's recent launch of Sputnik. As an animated film aimed at the younger generation, it really stands out among the crowd with an ample supply of heart and intelligence. As a film for children of all ages, however, is where The Iron Giant really shines.

Based on the 1968 children's book The Iron Man by Edward Hughes (who was incidentally married to noted poet Sylvia Plath), it's a simple story that works on many levels. Some fans of the film claim the robot to have Christ-like qualities, and it's certainly a valid comparison; after all, the Giant is not of this world, and the people don't understand him. A similar storyline has also been employed in the classic E.T., although it's safe to say this story works on a much larger scale. Regardless of your personal analysis of the film, it's easy to see that The Iron Giant succeeds on nearly every level. It's a rare breed of film that can accomplish such a feat (and entertain the whole family to boot), but I'd wager that any open-minded viewer with a pulse will walk away from this film with a huge smile on their face.

Of course, the magic of the film can be attributed to much more than the story itself, as The Iron Giant is really a sight to behold. It's my firm belief that hand-drawn animation will never die (no matter what Pixar would have you believe), and this film is as strong an example as any. Featuring stunningly beautiful artwork (especially the excellent background design), this film jumps off the screen like a storybook come to life. Although there are instances of computer-assisted animation (the Giant himself, for example), the seamless blend of the overall production really makes for a great-looking film. Character designs are relatively simple, and facial expressions and body language are pitch-perfect. The voice work is also terrific (featuring Vin Diesel as the Giant, Jennifer Aniston, Christopher McDonald, M. Emmet Walsh, and more), and the dramatic score also keeps everything flowing nicely. With this many successful ingredients---combined with a great directing effort by Brad Bird (who has previously worked on The Simpsons and also wrote Batteries Not Included)--- there's a lot to like about The Iron Giant. When I first saw it in 1999, I knew it was something special, and I still do.

Of course, with most any film, there's bound to be a few things that could have been slightly improved. To the film's credit, it does a great job of not pandering or "talking down" to its target audience (a problem inherent in most children's stories), but it still comes off as being a little preachy and heavy-handed at times. Despite the timeless nature of its message (also found in the original 1968 book), it's hard to tell such a tale without falling victim to this problem. While the film ultimately doesn't suffer from this, it may briefly take viewers out of the story a little. Still, despite the occasional instances of this problem, The Iron Giant never weighs itself down with sappy sentimentality---it doesn't always paint a pretty picture, and it's all the better for it. Additionally, the brisk pace of the 87-minute film really keeps things tight (although I'd have watched for another hour at least!). Even the ending does a great job of balancing sadness with optimism, and that's pretty tough for any genre of film to pull off. In all regards, this is a near-flawless example of modern animation and a film that really deserves to be seen by the whole family.

It's hard to believe 2004 marks the five-year anniversary of The Iron Giant's release, and its road to DVD has been a little rocky. Originally released in 2000, the first effort by Warner Bros. was pretty decent for such an underappreciated film. Featuring a beautiful anamorphic widescreen transfer and a great-sounding 5.1 mix, the only thing holding the disc back was a decent set of extras. This new Special Edition thankfully beefs up the extras a bit, but hardcore fans of the film may be a little disappointed with Warner Bros.' efforts. After all, this disc has been delayed for quite some time: it was originally slated for 2003, then August 2004, and now November to coincide with the release of Brad Bird's upcoming The Incredibles. It's easy to see that this release is a superior effort than the first time around, but it might not blow you away in every department (at least compared to the first DVD, anyway). With that said, let's see how this one stacks up, shall we?

Quality Control Department
Video & Audio Quality:
The 2000 release had an excellent visual treatment, but this release features an all-new digital transfer that preserves the film's original aspect ratio of 2.35:1. While there wasn't much wrong with the old disc, this one is ever-so-slightly better. The colors really pop off the screen, and the overall image detail is really great---it's easily one of the strongest-looking animation projects on DVD! Only the smallest instances of jagged edges and very mild interlacing were spotted, but this was still a top-notch effort that will make The Iron Giant a great demo disc for any lover of animation. It's also worth noting that the optional full-screen transfer has been dumped from this new edition, ensuring that future generations will not succumb to the evils of pan & scan.

Unlike the video treatment, the audio mix for The Iron Giant appears to be the same 5.1 Surround mix as heard on the original disc...not that this is a bad thing, mind you. Directional effects and overall ambience were excellent, and the thunderous footsteps of the Giant will keep your subwoofer happy. Action scenes and music cues were especially dynamic. A French 5.1 track has also been included, as well as English, French, and Spanish subtitles. Although I'd have loved to hear a new DTS track or even a 5.1 EX mix, it's hard to be disappointed with the audio treatment here. 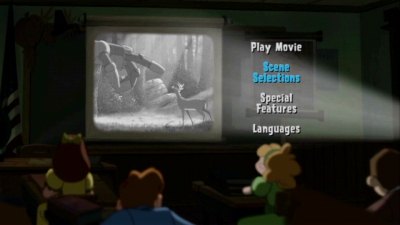 It's always nice to see a film presented with an appropriate menu design, and I'm happy to report that this new disc has a great presentation to boot! Menus are nicely done, and navigation is really smooth (although the chapter selection menu is a little clunky). More good news arrives with the death of the snapper, as this Special Edition comes packaged in a standard keepcase with absolutely fantastic cover artwork. Although no insert was included, the overall look of the new release really captures the mysterious feel of the film's earlier moments. As for the film itself, the 86-minute feature has been divided into a generous 34 chapters, and no layer change was detected.

Here's the part most fans have been waiting for: after a thin first release, does this new Special Edition knock one out of the park? Well, yes and no. Although the lineup looks pretty good on paper, the bulk of the included supplements never really dug much deeper than the surface...but there are a few gems found here. The most noteworthy is a new Audio Commentary featuring Brad Bird (Director), Jeffrey Lynch (Head of the Story Department), Steve Markowski (Supervising Animator for the Giant), and Tony Pacilli (Head of Animation). This proved to be a great line-up, as the four are more than willing to share personal experiences from the film's production. Among other things, they discuss the limitations of working with a limited budget and fighting seemingly impossible deadlines. All in all, it's a great listen for animation lovers and a thoughtful inclusion. Next up, we have a selection of Additional Scenes (18 minutes) that include an alternate opening sequence and an interesting dream sequence by the Giant. Although the bulk of these are presented in rough storyboard form, it's really interesting to see some of the "fat" that was trimmed from the muscular 87-minute final product. 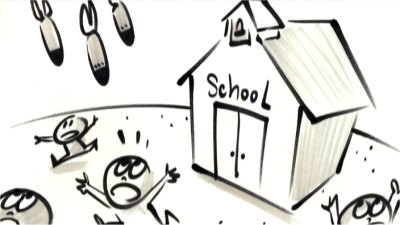 Also here, we get Teddy Newton: the X-Factor (5 minutes), an interesting short interview with the storyboard artist of the same name. It features a truly weird animation sequence and is a testament to but one of the many talents behind The Iron Giant. A second short piece with Newton, The Duck and Cover Sequence (2 minutes), features one of the most darkly funny "kid's songs" you're likely to hear (seen above). Next up, we have The Voice of the Giant (3 minutes), a brief piece featuring Vin Diesel at work behind the microphone. There's also Behind the Armor, a subtitle option that features a few brief behind-the-scenes clips accessible during the movie (in the same style as The Matrix and Monty Python and the Holy Grail). Lastly, we're treated to a Motion Gallery (4 minutes), an odd mix of finished clips and rough sketches that serves a recap of the film, as well as a Theatrical Trailer (along with a second trailer apparently created by Brad Bird). There are also a few easily found Easter Eggs, ranging from quick storyboard sequences to curious art oddities.

Overall, I enjoyed the supplements (especially the commentary), but it's pretty easy to see that the many featurettes are way too short to really get into. I'd have really preferred a more complete behind-the-scenes documentary, as well as a stand-alone art gallery with early sketches and promotional materials. Although I haven't seen the original featurette included with the first release, it's strange that it wasn't thrown in with this release for good measure. Even with my slight disappointment over the included bonus materials, this is still a nice mix of stuff that helps support such a great film---it's just too bad these features couldn't have been ironed out a little more.

One other note: you'd think that since this release was delayed to coincide with the release of The Incredibles, a trailer for it would be included?

Although the bonus features still didn't quite come together, this is a terrific release that really deserves a spot on your shelf. The film itself is a fantastic example of classic animation mixed with a great story, and Warner Bros. has delivered another great technical presentation. If that weren't enough, the price tag on this new edition is actually lower than the first release ($20), which really seals the deal on which version is the one to get. Overall, this is a release that should be bought without hesitation and enjoyed for years to come. Highly Recommended.


Randy Miller III is a cartooning instructor hailing from Harrisburg, PA. To fund his DVD viewing habits, he also works on freelance graphic design and illustration projects. In his free time, Randy enjoys slacking off, general debauchery, and writing things in third person.