Often times debated but still a popular favorite, Brian DePalma's The Untouchables (1987) is a hard-hitting, Prohibition-era mob film set in the war zone of Chicago. Violence was the norm---especially when it came to the distribution of bootlegged liquor---and it wasn't always the guilty that got buried. Law enforcement was nearly a lost cause, and mob boss Al Capone (Robert DeNiro) was practically Chicago's acting mayor. Eventually, someone got the guts to stand up to Capone; in this case, federal agent Eliot Ness (Kevin Costner). Ness didn't have much in the way of support; at times, it seemed his only backing came from home. After a bungled raid, he was a laughingstock among his peers. Still, he remained loyal to the cause, eventually finding support in a hand-picked team of young upstarts and law enforcement veterans that included Jim Malone (Sean Connery) and George Stone (Andy Garcia). A motley crue, to be sure, but it seemed the underdog group stood a chance against the mob violence. Like in all violent rivalries, though, blood would be shed from each side before the war was over.

The Untouchables was originally a 1959 TV series that starred Robert Stack (Unsolved Mysteries) as Eliot Ness and followed the same basic premise. Roughly 25 years later, director Brian DePalma wanted to add the atmospheric elements of the classic Western (specifically, those by the legendary John Ford and Sergio Leone), and the differences are noticeable. With an unrelenting amount of violence and bloodshed, The Untouchables is a film about a city at war with itself and the consequences that followed. The performances by Coster, Connery, Garcia, DeNiro, and the rest of the cast are memorable. The score by Ennio Morricone (who also scored classic Western films like The Good, the Bad, and the Ugly and Once Upon a Time in the West) is another highlight. Additionally, it's a film that balances a brisk pace with a respectable amount of character development. Overall, The Untouchables is a well-rounded film that aims to please, and remains a popular favorite since its release in 1987.

Interestingly enough, my first complete viewing of the The Untouchables was in my 10th-grade Social Studies class, and I really enjoyed it at the time (in all honesty, though, I was just thrilled to be watching a mob movie instead of taking notes). Although it's still a very entertaining and well-executed film, there have always been a few things about the film that bothered me. Occasionally, several minor characters don't deliver convincing performances. Occasionally, the music seems a little out of place with what's on screen. Occasioanally, the camerawork seems a little overdone and showy. Occasionally, the story progression isn't entirely believable. And above all else, occasionally I was reminded that I was watching a movie. These incidents have never cause me to dislike the film as a whole, but they've always kept it from being a true masterpiece in my eyes.

Still, the occasional flashes of brilliance make The Untouchables great entertainment that holds up to multiple viewings (hey, the scene with the baby carriage still gets me every time). Regardless of its flaws, it's one of the better mob films I've had the pleasure of watching, and it's certainly deserving of its fan following and praise. I liked it back then, and I still like it now. It's aged well over the past few decades, and that's truly one of the film's saving graces.

The original DVD of The Untouchables was like so many other earlier catalog DVD releases: sure, it looked good and sounded good, but the extras just weren't there. While this new "Special Collector's Edition" ups the bonus features a bit, this release still doesn't knock one out of the park. In any case, though, the DVD closely resembles the movie itself: a solid effort with a few slight missteps. With that said, let's see how this one stacks up, shall we?

Quality Control Department
Video & Audio Quality:
If you liked how the original release looked, then you'll like how this looks too---in other words, the transfers seemed identical overall. That's not a bad thing though, as Paramount's excellent track record for quality treatment is evident here. The film's 2.35:1 anamorphic widescreen transfer looks great for its age, boasting good color saturation and a fine level of image detail. Darker scenes are a little murky, and minimal grain is present---as well as few minor instances of dirt and scratches---but this is a great-looking disc that will still please fans of the film.

Likewise, The Untouchables also sports a Dolby Digital 5.1 EX mix; and while this may not be the same mix found on the original disc, it certainly sounds close enough. Like the first release, this mix is good but has a few minor problems. While the overall ambience and atmosphere are excellent and the dialogue is extremely clear, there are a few instances where this disc needed a little more punch. For instance, many scenes involving heavy gunfire or other explosions just don't seem as strong as they should be...and that's not in comparison to newer films, but the film's overall soundstage. It's not enough to really distract from the film in general, but still worth noting anyway. 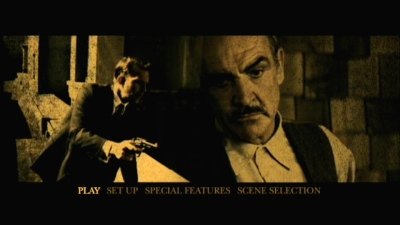 Great all-around job here, starting with nicely-designed animated menus. They look sharp and they're easy to navigate, and that's what really counts. The 119-minute film has been divided into 24 chapters, and a layer change was detected near the 70-minute mark. All included bonus features have been presented in non-anamorphic widescreen and fullscreen formats. Packaging was another highlight, and I really liked the cover design too (although it's not much different than the first release). No chapter insert or other promotional inserts have been included.

Since the original release of The Untouchables had only a theatrical trailer to its name, I was hoping for a thorough set of extras that would really support the film well. While what we get is interesting, it's still not everything I was hoping for. There's no audio commentary to be found, but the included series of featurettes adds up to be a decent look at the film's production and social impact. Running approximately an hour in total, things start off with The Script, The Cast, an 18-minute piece that includes participation from Brian DePalma and vintage cast interviews. Also here is Production Stories, a 17-minute featurette that takes us further behind the scenes. Obviously, the distinct look of the film is discussed in moderate detail, and there's also a nice handful of photos included too (seen below, preparation for one of the film's key scenes is underway). 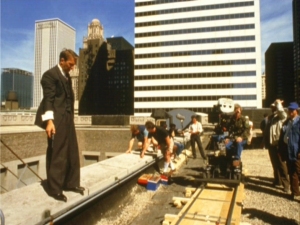 Next up, there's also Reinventing the Genre, which covers DePalma's influences and the impact of The Untouchables. An interesting section of this 15-minute piece also mentions an extended ending that was eventually dropped. A shorter featurette, The Classic, goes into detail about Ennio Morricone's score for the film, but only clocks in at 5 minutes and never digs below the surface. The final 5-minute extra (besides for the aforementioned trailer) is a vintage featurette called The Men, but doesn't really shed any new light on the film.

Surely, the majority of these featurettes proved to be worth a look, but I can't help but feel a little disappointed overall. I would have much preferred a more comprehensive documentary effort over the "bits and pieces" scattered about, and the lack of an audio commentary also makes the disc feel a little thin. Still, I can't be too picky: sure, it's not up to par with Paramount's excellent release for Once Upon a Time in the West (or even the Star Trek re-releases, for that matter), but The Untouchables: Special Collector's Edition is a pretty solid disc for under $20.

Hey, I doubt anyone ever mistook The Untouchables with a 100% historically accurate depiction of the Prohibition Era, but it's an entertaining film that's stood up pretty well since 1987. Although there are a number of elements that keep everything from really "clicking", the occasional flashes of brilliance make The Untouchables a successful effort and a watchable film. The DVD itself is well-rounded and should satisfy fans---whether it's worth a double dip, though, is another matter entirely. Since the video and audio treatment look and sound virtually identical to the original release, the lone upgrade offered by this "Special Collector's Edition" is a handful of decent bonus features. Owners of the original disc may want to give this one a rent first, but everyone else can easily consider this Recommended.