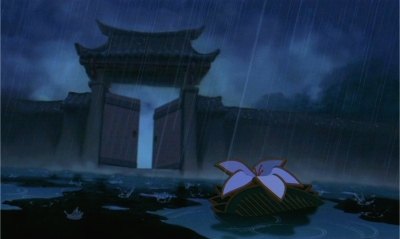 The 1990s were a good decade for Disney, both commercially and critically. During this time period, they produced some of the highest-grossing, best-loved animated features in modern history...although they didn't exactly knock every release out of the park. These films ranged from the great (Beauty and the Beast, The Lion King, Aladdin) to the pretty good (The Hunchback of Notre Dame, Tarzan) to the not-so-good (Hercules, Pocahontas). Thankfully, Mulan (1998) belongs in the first group. As a standard action-adventure tale, it does just fine. As a coming-of-age story, it also excels. In my eyes, though, it's a rare gem of a sweeping epic that manages to speed by in less than 90 minutes. This film is graceful, tightly-organized, and centered around a great main character to boot: a young woman who ignores tradition to save her family, doing so for purely unselfish reasons. While it's not quite up to the level of Beauty and the Beast or The Lion King, I'd easily rank it as Disney's third best feature film of the 1990s. And as much as some people would hate to admit it, Disney is one of the top animation studios around.

Even with a few of Disney's calling cards---the helpful animal sidekicks (Mushu the Dragon [Eddie Murphy] and Cri-Kee the Cricket) and the lingering undertones of young romance---Mulan tries hard to grow out of its Disney roots. As the studio's first animated film created entirely by its second unit animation team (based in Orlando), it certainly has a different atmosphere. The film's slightly darker, more sophisticated tone is emphasized by a cleaner, darker style of artwork. The feelings of "happily ever after" are thankfully kept to a bare minimum. For the most part though, Mulan still manages to satisfy when it heads back to familiar Disney territory: the songs are catchy and well-written, the heroine is believably strong and determined, and the voice acting and production are top-notch. 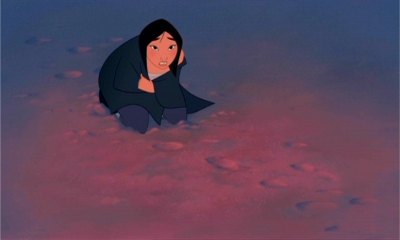 Still, there are a few things that don't quite work. For starters, the casting of Eddie Murphy as Mushu was a bad move. He's practically on auto-pilot the whole time, and his over-the-top attitude doesn't mix well with the rest of the story. Additionally, the closing sequence also sticks out like a sore thumb (someone actually thought 98 Degrees and Christina Aguilera were perfect closing acts for a film about Ancient China?!). Last but not least, I'll admit that the decision to voice the film in English was probably necessary from a commercial standpoint, but darned if it doesn't sound awkward. With so many accurate details present, why change the atmosphere with English dialogue? To make matters worse, a few of the characters are even given Chinese accents that border on insulting (although it's nowhere near as a bad as, say, the Siamese cats in Lady and the Tramp). Anyway, I'm happy to report that the "language" problem has been somewhat remedied with this release...check out the "Video & Audio" department for more details). In all honesty, though, Mulan is a film with good intentions that amazes and entertains, and easily stands as one of the best animated films of recent memory. 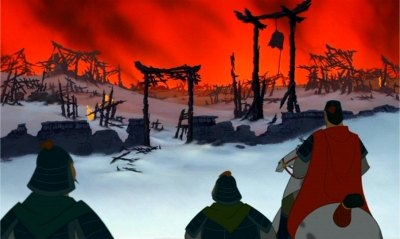 The road to DVD has been a little uneven, though, as Mulan was one of Disney's first releases for the young format (I believe it's also the first Disney film that wasn't released on laserdisc). The film's broad fanbase and critical acclaim helped to ensure a second release, and Disney has finally delivered with the long-awaited Mulan: Special Edition. This 2-disc set certainly presents the film in grand fashion, with a few nice surprises in the audio and video departments, although the bonus features aren't Disney's best to date. Still, for any lover of great films---animated or otherwise---Mulan is a satisfying effort that will undoubtedly age gracefully. If you've avoided it because you think cartoons are for kids, just watch it now and thank me later.

As if the story weren't enough, there's no doubt that Mulan is a feast for the eyes. NOTE: Although I originally reported that the original release's 1.85:1 aspect ratio had been cropped slightly for this release, a few sharp-eyed readers have informed me that the film's original aspect ratio is 1.66:1, as it appears here. Apologies for the error, and the "Video" rating has been changed accordingly. This anamorphic transfer looks excellent, with a high amount of image detail and a bold color palette. Even with a few minor instances of artifacting and interlacing, this is a very clean transfer that won't disappoint. Only minor digital imperfections keep Mulan from getting a perfect score.

I mentioned earlier how it bugged me that the characters spoke American English, but Disney has solved this problem by providing a few all-new audio choices...including an all-new 5.1 Mandarin (Chinese) mix! Also included are the original 5.1 English mix (default) as well as Spanish and French 5.1 tracks (by the way, English subtitles are also included). Also, it's worth noting that most of the musical numbers are also performed in their respective language tracks (exceptions include the closing song, "True to Your Heart"). Each track was sampled for review purposes---all of which displayed similar dynamic range---but I watched the entire movie with the Mandarin mix, and it made for a more enjoyable experience overall. Dialogue was easily heard, and the music and atmosphere were up to Disney's usually high standards. Above all else, no more half-hearted (and somewhat insulting) American-Chinese accents proved to be the icing on the cake. The only thing that kept this from being a perfect score was the lack of a DTS track, which was present during the film's theatrical release. 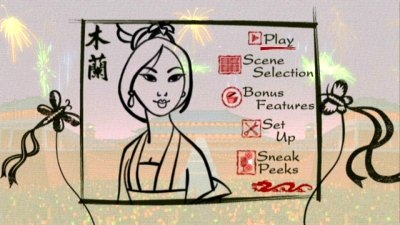 Disney rarely disappoints in the presentation department, and Mulan is no different. The beautiful anamorphic widescreen menus (seen above) feature tasteful animation, great layout, and smooth navigation (with the exception of a few clunky image galleries on Disc Two). The brisk 88-minute film has been divided into a generous 30 chapters, and no layer change was detected during playback. Bonus features are presented in fullscreen and non-anamorphic widescreen formats. The packaging is also nicely designed, featuring a similar style to Disney's past Special Edition releases. Both discs are housed in a slim double keepcase with a matching slipcover, and a cornucopia of inserts and advertisements have also been included.

Although I'll admit that this 2-disc set falls a little short of Disney's past offerings, there are a few well-hidden bonus features worth hunting down. Sadly (again, much like Disney's past offerings), you'll have to wade through a lot of promotional fluff to get to it. Interestingly enough, some of the best new features of this release (including an Audio Commentary and the previously-mentioned 5.1 Mandarin mix) aren't mentioned at all on the packaging! Disc One features said Audio Commentary with producer Pam Coats and co-directors Tony Bancroft and Barry Cook. Although the three seem a little dry during this session, it's still a great listen for fans of the film. The usual round of production insights and personal experiences are included, but it's always nice to hear this stuff from the horse's mouth. While I'd have loved to hear an additional track with the animators (such as the one included on the recent Aladdin: Platinum Edition), it's nice to know that Disney still caters to those who appreciate a good audio commentary. Next time, though, why not bother mentioning it on the packaging? 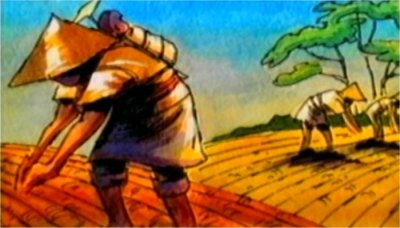 Next up, we're treated to a series of Deleted Scenes (roughly 25 minutes' worth), presented in various stages of completion (such as The Emperor's Dream, seen above). There's also the Disney-standard plethora of Music Videos, including Jackie Chan's performance of "I'll Make a Man Out of You" (who sings on the Mandarin 5.1 mix, and doesn't sound half bad!). Less notable are performances by Christina Aguilera and an awful, Nickelodeon-grade remix of "True to Your Heart" by Raven. Also included here is DisneyPedia: Mulan's World, a goofy, supposedly "educational" guided tour of Ancient China. Unless you're five years old and easily amused, you're probably better off hitting up Google and typing "Ancient Chinese History". The first disc winds down with Fun Facts, a brief assortment of trivia and other oddities (NOTE: unlike past Disney DVD releases, this is not a feature-length subtitle track). 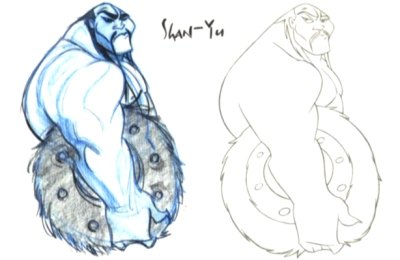 Disc Two starts off with the "Music & More" section, which proved to be as empty as Chick-fil-A on a Sunday: the only inclusion was a Spanish Music Video for "True to Your Heart". We're also treated to a few quasi-promotional behind-the-scenes featurettes, including The Journey Begins (about 15 minutes total, divided into 3 sections). Highlights of this piece include early 1995-96 promotional clips for the film, which lets viewers see the progression of the artwork and story. On a similar note, there's also the Story Artists' Journey (10 minutes, 2 sections), which includes a short storyboard-to-film comparison. Next up are individual looks at the Design and Production of the film (13 and 17 minutes, respectively), the highlights of which include several still frame galleries and various stages of art development (seen above). There's also a quick look at the Songs of Mulan (5 minutes), and a great International section that showcases a wide array of international audio tracks for the film (10 minutes). Hidden at the end is a Publicity Gallery that showcases some great poster art and other promo material; unfortunately, the film's trailer and tv spots are a no-show.

Again, this wasn't a bad mix of stuff, but I was a disappointed overall. This is easily one of Disney's better efforts of the past decade, and it deserves more than their standard array of diluted kiddie fare mixed in with a few good supplements. An additional audio commentary or a longer behind-the-scenes documentary (two highlights of the Aladdin: Platinum Edition) would have really beefed this release up to the level I was expecting. While I understand Disney's need to consistently market their films to a younger audience, here's hoping they try to be a little less obvious about it in the future.

Clearly, the movie itself is the highlight of this release, and the addition of a few new 5.1 tracks were a most welcome surprise. The technical department was right on par with most of Disney's past DVD efforts, but the extras proved to be a little lacking. Still, Mulan is one of Disney's best efforts of the 1990s, and rightfully deserving of its status as a modern animated classic. If Disney would've tried something a little different in the DVD department, we'd have a near-perfect package on our hands. Still, I can't complain: we've got a great-looking, great-sounding, top-notch film on DVD, and that's never a bad thing. Highly Recommended. 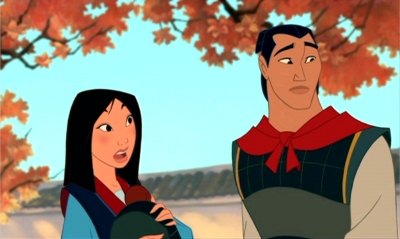 Beauty and the Beast

Snow White and the Seven Dwarfs