Shout Factory // Unrated // November 16, 2004
List Price: $34.98 [Buy now and save at Amazon]
Review by Francis Rizzo III | posted October 29, 2004 | E-mail the Author
In 10 Words or Less
The animated world of a young amateur filmmaker The Show
For a short while, there was an amazing rush to add animated shows to prime-time television, resulting in some of the least-watched series ever. From "Mission Hill" and "The Oblongs" to "Gary and Mike" and "The PJs," network TV just didn't know what to do with these shows, so they quickly left the airwaves, only to find their audience on cable. Among them was one of the biggest reclamation projects TV had seen: "Home Movies."

First produced for UPN in 1999, "Home Movies" only ran for six episodes on network television. That's probably for the best, since the show was too subversive and intelligent to mix with the bottom-rung mess that was UPN's schedule. After its short network life, Cartoon Network picked it up and continued production for four seasons, as part of their [adult swim] line-up. Shown often, the series earned a loyal fan base, and became a staple for the late-night programming block.

Brendon Small (voiced by series creator...Brendon Small) is a kid with a vision to become a filmmaker, and the intellect of a 30-year-old. Actually, he already considers himself a filmmaker, shooting awful short movies with his friends Jason (H. Jon Benjamin, "Dr. Katz") and Melissa (producer Melissa Bardin Galsky). Brendon has got a bit of Calvin (as in "Calvin and Hobbes") in him, as he focuses on his imaginary film world, but there are plenty of adults around to keep him anchored to reality. First and foremost is his mom Paula (voiced by Paula Poundstone for the first five episodes, then Janine Ditullio ("Late Night with Conan O'Brien")), who is raising Brendon by herself, while trying to get her own life together. 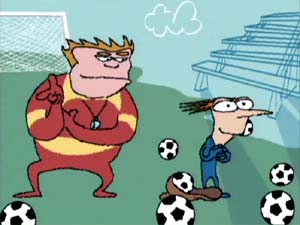 The show does follow something of a sitcom formula in terms of plot and pacing, but at the same time, it is completely different. This is all comedy, all the time. No one on this show takes life very seriously. In fact, the kids may be more mature than the adults. Paula flits from interest to interest and job to job, while Brendon's soccer coach, John McGuirk (Benjamin, again), a drunken man-child, is the worst role model a child could ask for. Often the plots are kick-started because Brendon and his pals get caught up in some zany scheme by one of the grown-ups. "Dr. Katz" fans will recognize plenty of the voices, especially Jonathan Katz himself, playing Melissa's dad, Erik. Watching him here makes me long for "Dr. Katz" DVDs. (Listening, Shout! Factory?)

While the writing and voice work are excellent, there's one aspect of the show that literally drives people away from watching, and that's the animation. "Home Movies" is produced in Squigglevision, a technique unique to Soup2Nuts productions ("Dr. Katz," "Science Court") that involves using vibrating lines to create the illusion of additional animation, thus lowering production costs. The resulting look has been known to give some people headaches or nausea, but, to be truthful, it never bothered me. In fact, I feel it gives the show a low-budget charm that standard animation lacks. Only the first season used this technique, as the show switched to cheaper Flash animation the next year, though the look changed only slightly. The animation definitely improves as the season progresses, as you can see by comparing the two frames in this article.

Among the best episodes in the first season are "Law & Boarder," when Paula's college friend visits, causing trouble when it definitely wasn't needed, "Director's Cut," which shows Brendon directing a rock opera based on a Kafka novel and "School Nurse," which pits Jason against McGuirk for the affection of the new school nurse. Also, after the fifth episode, Paula Poundstone is replaced as Paula, and the character comes alive making for more enjoyable episodes. It definitely feels like Poundstone's slow delivery dragged down the show when she was on-screen.

The DVDs
Shout! Factory has devoted three discs to the 13 first-season episodes, with five episodes on the first disc and four on each of the final two DVDs. On the main menu for each disc, a "Play All" option, episode selections, special features, a plug for Shout! Factory and an easter egg are available. All of the menus are animated when selections are made, with each option activating a different action. When selecting episodes, any available commentary tracks are listed, along with the episode's original airdate. The discs come packaged in three clear ThinPaks with double-sided covers, housed in a cardboard slipcase. 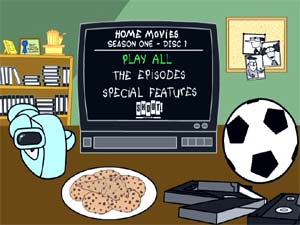 Here are the episodes:
Disc One:
• "Get Away From My Mom" - Coach McGuirk tries going out with Brendon's mom.
• "I Don't Do Well in Parent-Teacher Conferences" - Paula's not very enthused about attending a meeting with Brendon's teacher.
• "The Art of the Sucker Punch" - Brendon helps Jason deal with a bully.
• "Brendon Gets Rabies" - A cat-sitting gig goes all wrong for Brendon.
• "Yoko" - Brendon gets involved with a girl at camp, but it ends up badly.

Disc Two:
• "Director's Cut" - Brendon gets upset when Jason and Melissa want to do a different movie than him.
• "It Was Supposed to Be Funny" - Brendon's film about Melissa's grandfather upsets her.
• "Method of Acting" - Paula falls for a student in her writing class, while Brendon tries his hand at acting.
• "Life Through a Fisheye Lens" - Money problems strike the Small household, forcing Brendon into the workforce.

Disc Three:
• "School Nurse" - As lice hits the school, Jason falls for the hot new nurse.
• "Mortgages and Marbles" - When Brendon's little sister gets marbles
• "Law and Boarder" - An old friend of Paula's visits, just as Brendon gets hit by a car
• "Brendon's Choice" - A film award puts Brendon in the local spotlight and brings his father back into his life.


The Quality
Due to the style of animation used, there's no shading in "Home Movies", so all the solid colors are reproduced cleanly and vividly. Though it looks like there are coloring errors at times in the background, that is simply the style of the show. Occasionally, it seems like some edge enhancement is evident, but with Squigglevision, it's hard to tell. It's worth noting that after Episode 5, when the show moved to Cartoon Network, the quality actually seems to improve. The audio is presented in 2.0 Surround Stereo, and sounds excellent. Episodes including Brendon's friend Dwayne's band (lead on vocals by Small) have songs that give the shows a bit more aural depth than the usual center-channel tracks.

The Extras
Disc One
"Get Away From My Mom," "The Art of the Sucker Punch," "Brendon Gets Rabies" and "Yoko" each have commentary by Small, Benjamin and producer Loren Bouchard. While the guys joke around a lot, they do share quite a bit of information about the episodes. If every commentary was so energetic, these tracks would be way more popular in the mainstream.

In addition to the four commentaries, the first DVD has an interview with Bouchard (24 minutes). He goes into good depth about how he got started in animation, "Dr. Katz" and the origins of "Home Movies." Less informative, but just as entertaining is a short film by (the real) Brendon Small, titled The Thor Von Clemson Advanced Fast Hand Finger Wizard Master Class. It's pretty silly, but fits well with the show's sense of humor. An animation gallery and a pair of fun easter eggs fill out the disc. One, in particular, is an inspired game.

Disc Two
"Director's Cut" and "It Was Supposed to be Funny" each have a commentary by the boys, with "O'Grady" producer Jack Ferraiolo joining the group on "Funny." Instead of letting their enthusiasm drag, they do what they can to keep the tracks fresh, much to the audience's advantage. The tracks are complimented by an interview with Small that fills in some of the show's backstory, if you can separate truth from fiction. Small is a straight-faced liar who spins a ridiculous story of how the show got started. It's fun to watch him spin his lies, and there are probably some interesting truths in there too, including discussion of the show's style of animation.

An animation gallery and animatics for "Director's Cut" are available, along with a short film by Benjamin, Baby Pranks. A parody of hidden camera shows, it's not up to the level of "Home Movies," but cute anyway. It's definitely an interesting inclusion. As on disc one, there's an unusual easter egg included.

A pair of interviews are presented here, one with Benjamin going solo (20 minutes), and one with the three principals, Bouchard, Benjamin and Small (16 minutes). Much like Small, Benjamin BS's his way through this chat, presenting a very funny faux biography. While the trio plays off each other like old friends, this interview is somewhat straightforward, covering much of the development of the show and the thought process behind it. Anyone looking for a making-of piece should be satisfied with this in-depth featurette. The same animatics for "School Nurse" are a choice along with an animation gallery. These are interesting, but not worth many looks, unless you're an artist. Again, an easter egg is available on this disc, this time featuring an interview gone wrong, while some of the nicest DVD credits I've seen are included as well. 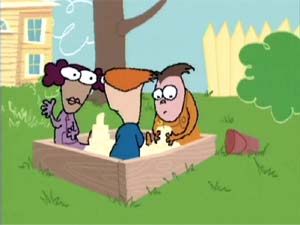 The Bottom Line
Fans of smart-ass comedy and fun cartoons are bound to enjoy this series, and the team behind it, with help from rising studio Shout! Factory, put a lot of effort into creating a set of DVDs that go beyond the call of duty for such a cult show. Brandon Small is a big DVD fan, and he's helped to pack these discs, creating a set worth picking up. Newcomers to "Home Movies" might want to check the show out on Cartoon Network first, but fans should purchase without hesitation. This is an excellent collection.