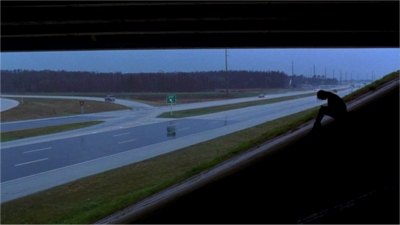 It's a tough film to watch, but Monster (2003) is a must-see nonetheless. By now, most have caught wind of Charlize Theron's Oscar-winning performance as Aileen Wuornos, better known as "America's first female serial killer". Convicted and subsequently put to death in 2002 for the murder of seven men in Florida, Wuornos was indeed a troubled woman capable of extemely violent behavior.

Monster does not glamorize or justify this behavior. The viewer is exposed to a woman who had not only committed unspeakable crimes, but was often the victim of unspeakable crimes herself. Her childhood rendered Aileen with an inability to experience mutual love and respect like most of us do, leading her to prostitution by the young age of 13. After a pregnancy the same year, Aileen moved to Florida to continue turning tricks (often times from the side of the highway, away from the eyes of city life and other prostitutes).

Eventually, she crosses paths with Selby---a young lesbian woman under the care of her aunt and uncle---after unwittingly stepping foot in a local gay bar, and the two become friends. Though you'd be hard-pressed to find two more opposite young women, both have one thing in common: a broken family life. Their initial friendship leads to a more intimate one, an easy lead-in to young Selby leaving home to travel with Aileen. The latter continues turning tricks to earn money, until a particularly violent encounter leads to murder. Though this violent act was done entirely out of self-defense, Aileen's judgement of men is further damaged from here on out. Almost immediately, she turns to pre-meditated murder in order to make money from her customers.

It doesn't get any better from there. 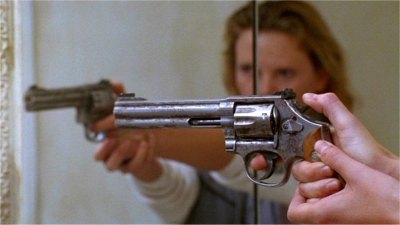 The nine-month series of events---roughly between the introduction of Selby and, later, Aileen's conviction---is the primary focus of Monster. For most casual news-watchers, the mention of a serial killer's conviction would bring a smile to our faces. "Good," we'd say, "...another monster behind bars." Not often do we get a glimpse of how killers start their journey down the wrong road, but this film shows us there was a woman behind there somewhere. A violent, troubled woman, to be sure. In her own way, though, she was a child who seemingly never had a chance at a good life, and a series of terrible events triggered all the wrong emotions and outcomes.

It takes guts to tell such a dark, depressing story in an industry based on happy endings and successful underdogs. Three-time director Patty Jenkins does a great balancing act here, keeping the tone consistent in all but a few areas. With only a few missteps---including a somewhat rushed ending and unnecessary voice-over narration by the protagonist---Monster is an excellent film that demands attention and rewards its viewers with brutal honesty. It's easily one of 2003's better efforts in more ways than one. 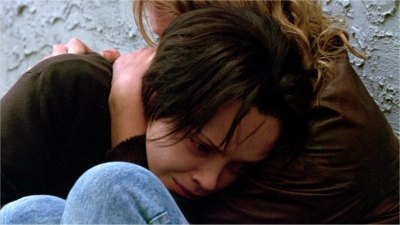 Of course, the terrific performance by Charlize Theron is as good as advertised. Her physical and emotional transformation into Aileen Wuornos is simply amazing, and there's no doubt in my mind that the right woman won the Oscar. Christina Ricci also does a great job in the role of Selby, adding a few welcome layers to a vital supporting role. Bruce Dern also fills out a key role as Thomas, one of the only men Aileen could ever see eye-to-eye with. Another notable is Lee Tergsen (Oz), who lends his talent to one of the most harrowing 7-minute sequences you'll ever see. Overall, there's a lot to appreciate about this film: it's a hard one to enjoy, but an easy one to respect.

Monster was first released on DVD in June 2004, and it wasn't a bad effort at all. The film's solid technical presentation didn't disappoint, but the extras left a little to be desired. Roughly seven months later, Columbia/Tri-Star now offers DVD fanatics a new 2-disc Special Edition to right a few small wrongs. With only a handful of new bonus features added to the mix, though, it's a tough call as to whether this new release is worth the double-dip. It's no surprise that this slightly fatter edition is the better of the two; whether it's worth $25 is another matter entirely. With that said, let's see how this one stacks up, shall we?

Quality Control Department
Video & Audio Quality:
First, the bad news: the video and audio quality are identical to the original release. Now, the good news: that's not a big problem. The film's 1.78:1 anamorphic widescreen transfer is a good effort, offering a high amount of detail and a nicely rendered color palette. Although there are a few instances of dirt and grain that pop up---especially in a few of the film's later scenes---it's a fine-looking transfer that won't disappoint. A few touch-ups could have made this re-release a little more worthwhile to owners of the original, but it's a great presentation overall.

Likewise, the audio presentation gets the job done. With the addition of three new audio tracks (Spanish 2.0, French 2.0, and a new audio commentary), there's a lot to choose from. The original English 5.1 Dolby Digital Surround and DTS options are still on board, and either one is a great choice. Both offer high detail and clarity, with a slight edge going to the DTS for a more natural-sounding mix overall. Spanish and French subtitles are also included, but it's disappointing that English subtitles are still nowhere to be found. 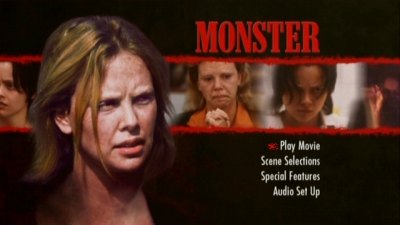 Simply-designed menus and easy navigation are always a plus, and Monster is blessed with both. The 109-minute film is divided into 25 chapters, with a layer change detected near the 65-minute mark. The packaging is fairly similar to the first release, though simplified in comparison to the text-heavy original. This 2-disc set is housed in a slim double keepcase, with a rather useless slipcover holding things together. An ad insert has been included for your buying convenience. Most of the bonus features are presented in non-anamorphic widescreen with only a handful of exceptions. For those with widescreen TVs, it makes for an awkward blemish that could have easily been corrected.

A slight step up from the previous release, this new Special Edition features a few notable additions. The first is an Audio Commentary with director Patty Jenkins, actress/producer Charlize Theron and producer Clark Peterson. This is a decent track filled with terrific insight about the film's shooting and production, thankfully keeping the back-patting to a minimum in the process. A few interesting anecdotes are shared by Theron and Jenkins (who did a notable amount of research on the serial killer), with authentic locations---and in some cases, background characters---pointed out along the way. Peterson has a little less to say during this session, though all three participants keep things moving along quite nicely. 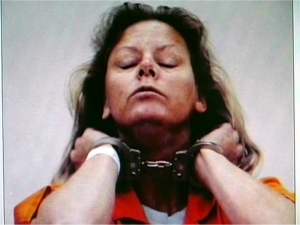 Disc 2 contains the bulk of the bonus materials. New to this edition is The Vision and the Journey, an extended behind-the-scenes look at the film's production (25 minutes). Like the shorter featurette found on the original release, it covers the basics well...especially Theron's convincing transformation into her character through the magic of makeup. There's also some footage of the real-life Wuornos (seen above) thrown in for good measure. Although this featurette is still a tad on the fluffy side, it's a nice glimpse at what must have been an extremely difficult project. Also new here is a series of Extended and Deleted Scenes (17 minutes total) with optional commentary by director Patty Jenkins. These aren't especially exciting, but it's always good to see how a bit of trimming can benefit the finished product.

Here's the bad news: outside of an additional Trailer (for the Special Edition DVD you've just bought), that's all she wrote. Still on board from the original release are Theatrical and International Trailers, a lame 30-second Plug for the soundtrack, a decent 15-minute Interview with Jenkins and composer BT, and an interesting Film-Mixing Demo. It's a nice assortment of stuff all around, but those who bought the original release will likely be disappointed. I'd have loved to see a full-length documentary about the real-life killer herself...if anything else, it would have kept the overall DVD presentation more in tone with the actual film.

We already know the movie's a great effort. The real question: is this DVD worth buying again? I'd be lying if I said the new additions to this release were worth $25 on their own, and there are still a few bases left uncovered with this disc. I'd probably encourage those who own the first version to give this one a rent, just to give the new features a once-over. As it stands, there's just not enough new stuff on here to make it worth the upgrade. For those who haven't purchased Monster on DVD---and I'm willing to bet you're the majority---this new Special Edition is the stronger of the two and comes Recommended.