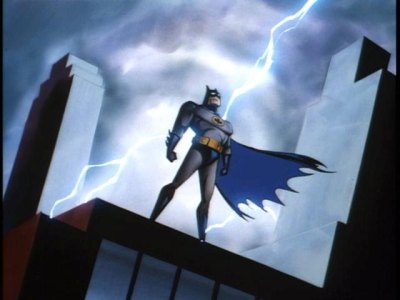 From
1941 to 1943, the Fleischer brothers released a series of Superman
cartoons that set the standard for animated action shows.  In these
shorts Superman didn't move like a cartoon character; his actions were
realistic looking even when he was leaping into the air to fly to Lois
Lane's rescue.   Not only was the animation excellent, but the
stories were dynamic and exciting too.  Unfortunately, in the fifty
years following the first Fleischer Superman cartoons the art of adventure
show animation had not improved at all.  No advancements were made,
and most of the shows were substantially worse than these early classics.
Sure there were some action oriented cartoons that were shown in the intervening
years, like Transformers and G.I. Joe, but while these had
a certain charm to them, they were little more than extended commercials
for toy lines.  Crudely drawn with predictable plots and watered down
action scenes these latter offerings paled in comparison to the Fleischer's
early 40's material.

Then came Batman.  In 1992 Batman: The
Animated Series debuted as the first worthy successor to the Fleischer
brothers.  It is not exaggerating to state that this show revolutionized
cartoons; from the visual style of the show to the sophistication of the
scripts, this was ground breaking material that influenced many shows that
came after it.

Warner Brothers, after an abortive attempt to release the show on four
episode discs, is continuing to dispense this program in healthy 28 episode
chunks.  Do to the vagaries of afternoon television, season sets aren't
really practical (there were 60 episodes in the first season, but only
10 in the second.)  These sets of 28 episodes are a good solution.
They give a healthy dose of the show, but not at an unreasonable price.
The shows are presented in production order, not the order that they were
originally aired.

The episodes included in this set are:

The Cape and Cowl Cons (should be "Conspiracy," but for some reason
they abbreviated it.)

Night of the Ninja

The Strange Secret of Bruce Wayne

Heart of Steel Part One

If You're So Smart, Why Aren't You Rich?

Moon of the Wolf

Day of the Samurai

Terror in the Sky

Birds of A Feather

I Am the Night

The Man Who Killed Batman 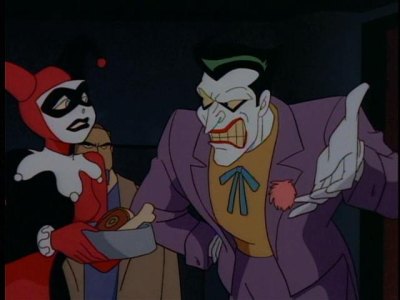 align=RIGHT>This set has
the show at the absolute top of its form.  There isn't a lame show
in the bunch, and many of the episodes in this set are destine to become
classics.  Prechance to Dream, the second show in the set,
is a wonderful look at what might have happened if Bruce Wayne's parents
hadn't been killed.  After being knock out while chasing some crooks,
Bruce wakes up at home, uncertain as to how he got there.  He's surprised
to find that the entrance to the Batcave is blocked, but even more astonished
to discover that his mother and father are still alive.  Bruce must
figure out what going on, but in doing so, he knows he'll ruin the happiness
that he's discovered.  (This show is based on the excellent Superman
comic story "The Man Who has Everything" written by Alan Moore.)

Almost Got 'im, probably my favorite show of the series.
This story takes place during a "villain's night out" where Batman's main
enemies aren't committing crimes.  They are all sitting around a table
in a bar playing poker, relaxing.  While talking, the conversation
turns to Batman of corse.  Like a group of fisherman swapping stories,
each crook takes a turn telling the time that they were closest to killing
Batman.  The little vignettes were all full of action, and the framing
story was very funny.  A great combination, with an excellent ending
line.

The Batman's background story takes is fleshed out in a couple of episodes
too.  His early training plays an important part in Night of the
Ninja, and I Am the Night introduces Dr. Leslie Thompkins who
is an important person from when Bruce was young.  Viewers get to
find out just where the Batmoblie came from in The Mechanic, a great
show that explains some aspects of Batman's world that usually gets glossed
over.

Robin's origin is recounted in Robin's Reckoning, a two part
story which won an Emmy.  This story examines the bond between Batman
and Robin, and why the Dark Knight agreed to raise a young boy. 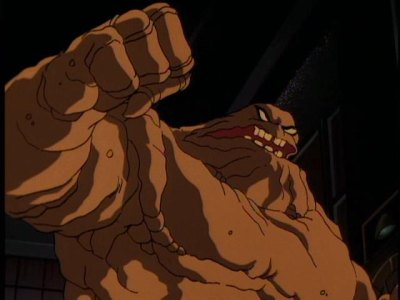 The writing on
the show is top notch.  The show doesn't dumb itself down to appeal
to a young audience, the creators thought that if you have well written
intelligent stories, kids would be attracted.  They were right but
the show also appeals to adults for the same reason.

The art decco look of the show, something fairly daring at the time,
especially for a kids cartoon, really gives the program atmosphere.
The police blimps that start off the credits, the thick heavy lines of
the Batmoblie, an the black and white TV sets all sever to let the viewer
know that they are in a world similar to ours, but very different too.
It makes the show interesting to watch and also sets itself apart from
other animated Batman shows.  There's no confusing this program with
Super-Friends.

DVDTalk Reviewer Adam Tyner covered many of these same points more thoroughly
in his excellent review
of the first volume.  Readers who want more details on the strengths
of this outstanding series are invited to read his review here.

This set offers the viewer the choice of English, Spanish or French
soundtracks, all in stereo.  I viewed the show in English, and was
very happy with the quality.  The dialog was easy to discern and the
sound effects came through clearly and at an appropriate level.

The thing that really stands out about the audio to these shows is the
wonderful orchestration by Shirley Walker.  Each episode was scored
and had a full orchestra behind it, making this one of the best sounding
made-for-TV cartoons around.  The music comes through fully and with
great clarity, making this a very good sounding DVD.  There are English,
French and Spanish subtitles.

The full frame picture quality is good for a show of this age.
The colors that are used for the show are dark, so there are few vivid
and bright scenes.  The detail in the shadows and in the night scenes
are good, and the colors do not appear to have faded with time.  The
picture is just a touch on the soft side, but this fits the mood of the
show.  On the digital front, there are some defects, most notable
some aliasing and minor compression artifacts in the background but nothing
that would be considered distracting.  A nice looking set.

This set has some really good extras included with it.  There are
four commentaries by Bruce Timm (Producer) and Eric Radomski (Producer.)
They provide an alternate audio track for Robin's Reckoning, Heart of Steel
part 2, Almost Got 'im (where they are joined by writer Paul Dini) and
Harley and Ivy where the pair are joined by Boyd Kirkland (Producer.)
There were some pretty big stretches of silence during a few of these,
but they were still a lot of fun.  They point out a lot of inside
jokes (like the origin of Harley's gun) and background details that the
casual viewer might have missed, as well as giving behind the scenes information
about the production.

There is also three featurettes included on the discs.  Robin
Rising is an eight minute look a the Caped Crusader's sidekick, and
him placein the series.  Gotham's Guardians takes ten minutes
to look at the supporting characters surrounding Batman including Commissioner
Gordon, Alfred, Selina (Catwoman) Kyle, and Harvey Bullock.  The last
one is Voices of the Knight where the voice actors are interviewed.
All three of these were fun extras.  The first two don't stop at just
giving a history of the characters, but also discuss why the characters
are included, and how they fit into the stories that they wanted to tell.
The last one was my favorite, giveing fans a chance to learn a little about
the actors behind the faces so to speak.

I really like this show, and this volume contains some of the absolute
best episodes there the series has to offer.  Full of adventure and
action with just the right mix of humor (but not camp) thrown in, Batman:
the Animated Series is one of the best cartoon series ever made.
This four disc set of 28 episodes has some wonderful extras as well as
looking and sounding very good.  All animation fans should check it
out.  DVDTalk Collector Series.