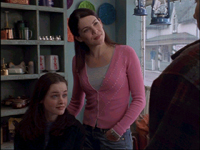 When I was trying to decide on a witty, intelligent quote from Gilmore Girls: The Complete First Season to use as an introduction for this review, I suddenly began to feel a bit overwhelmed and decided, after all, not to use a quote at all. Why? Simply because there are way too many to choose from throughout the season. For a show whose original premise, taken at face value, sounds about as exciting as watching paint dry, Gilmore Girls easily eclipses anything that you might be thinking about it before you actually sit down to watch an episode. Hmm, let's see, a 32-year-old mother and her 16-year-old daughter (both sharing the same name, mind you) are not only related, but they're best friends. How The WB ever had the cojones to give this show a chance - simply based on creator Amy Sherman-Palladino's premise - is completely beyond me. How they imagined a show with that premise would find an audience in today's television market baffles my mind. But thank all-that-is-holy that they did because Gilmore Girls is easily one of the fastest, wittiest, and most intelligent shows on television today.

While the crux of the show clearly lies in the relationship between Lorelai and her daughter, Rory, Gilmore Girls is so much more than that. It's a show that's not afraid to assemble a large array of oddball characters in a tiny, fictional town and let them all explore the virtues of life, love, and their ever-changing relationships. It's a show that doesn't condescend to its audience, and instead challenges them with some of the fastest dialogue on television, while peppering that dialogue with some of the most obscure pop-culture references you'll find anywhere. And finally, it's a show that has some of the best actors on television - they'd have to be to deliver that rapid-fire dialogue - and gives them the freedom to experiment and shine as their characters. 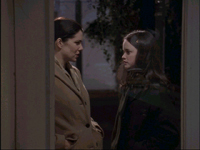 Gilmore Girls is a show that I resisted when it first hit the airwaves a few years back. That is, until I watched an episode and realized how much it had in common with my two favorite television shows, Buffy the Vampire Slayer and Angel. What these shows have that, in my opinion, so many other sub-par television shows lack is a complete and utter willingness to go where other shows are afraid to go. These shows believe in the intelligence of their audience and they believe that their audience wants to hear smart, witty, challenging dialogue. They believe that their audience doesn't simply want to be entertained for an hour - though, of course, they will be entertained - but also wants to be challenged. Where other shows would shy away from dropping the obscure reference or avoiding the cliché moment, these shows go full force into this territory. And they're all the better for it. What could have grown from its premise to be a sad, sappy show about the relationship between a mother and her daughter has instead turned into one of the most entertaining and intelligent series on television.

Gilmore Girls: The Complete First Season is presented in a serviceable 1.33:1 full frame transfer that is every bit as good, if not better, than the show's original broadcast quality. Sure, there are a few problems with this transfer, but for the most part these episodes look great. All the warm, Autumnal colors that are the visual highlight of Gilmore Girls come across beautifully on this DVD set. Gold and orange hues are rendered very nicely, although overall color can at times be a bit soft. Flesh tones are accurate, and shadows and blacks are nicely rendered. Detail, at times, leaves a bit to be desired, as the overall image is also slightly soft at times. There are no real compression problems to speak of aside from the occasional hint of pixelation and there's nary a sign of edge enhancement or visible layer changes on these discs. The only really noticeable blemish on this transfer is the abundance of grain from time to time. The show has an overall graininess to it that is far from distracting, but in some lower-light scenes grain rears its ugly head in a big way. Nevertheless, the visual presentation on these discs is on par with what most of us have come to expect from a typical TV-on-DVD release and certainly outshines anything you may have seen during the original television broadcast.

Sound:
The audio on this release is presented in a Dolby Digital 2.0 format that also stands up nicely to the usual TV-on-DVD expectations. Although the packaging states that the track is presented in Dolby Surround Stereo, it's really just a glorified stereo track, and a quality one at that. Dialogue is absolutely the most important aspect of Gilmore Girls, as it comes rapid-fire throughout every episode, and is presented beautifully on this track. It comes across as crisp, loud, and distinct, and is clearly the focal point of this audio presentation. The soundtrack, however, also plays a crucial role in the show and is presented nicely here as well. Balance is good across the front soundstage, though there is some very slight level fluctuation and some episodes seem a bit louder than others. The surrounds provide some support to the soundtrack as well. The overall track sounds just as good, if not better, than it did when originally broadcast, and when piped through Dolby Pro Logic II encoding actually comes alive. This is especially evident in episode 13, "Concert Interruptus," when The Bangles start playing and the track provides a nice, enveloping stadium feel.

Extras:
While the hardcore Gilmore Girls fan might be a bit disappointed with the amount of extra material on this DVD set, what we do have is not too shabby. While providing a bit of depth for the more seasoned viewer of the show, the extra material also serves as a nice way to get first-time viewers up to speed on what Gilmore Girls is all about. 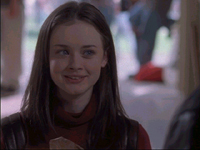 The first, and most substantial, feature included is an approximately 22-minute long making-of documentary called "Welcome to The Gilmore Girls." This all-too-short featurette covers just about every aspect of the show and includes interviews with all the main cast and crew. There is a lot of input from the very quirky Creator/Writer/Director/Executive Producer Amy Sherman-Palladino as she tells the tale of how the show came to be picked up by The WB, as well as the real-life inspiration for the fictional town of Stars Hollow, CT. The rest of the cast and crew provide a great deal of insight into Gilmore Girls and are all clearly proud of how intelligent the show is. Viewers are also treated to a good amount of behind-the-scenes footage, and even a bit of rehearsal footage of Alex Borstein in the role of Sookie. This is, in fact, a great little featurette that stands apart from the typical EPK-type fluff we see in many DVD releases. My only gripes are that it was all too short and it would have been nice to see more input from Alexis Bledel. Otherwise, watching this feature is a treat for any fan of the show.

Also included on this disc is Gilmore Gossip and Goodies for "Rory's Dance," which is basically a pop-up video version of episode 9, "Rory's Dance." The episode is shown in its entirety, only this time around little factoids pop up, from time to time, on the bottom of the screen. These factoids provide information about the cast, the obscure references made in the dialogue, and many other tidbits of information culled from the episode. While I think this feature was a great idea, I'm not so sure it's as good as it could have been. The pop-ups don't come frequently enough for my taste, and sometimes they only provide the most general information. Where they do shine, however, is when they refer to the obscure pop-culture references that pepper the dialogue of Gilmore Girls. It would have been great to have this feature for every episode to decipher the sometimes nearly undecipherable references. It could have been an excellent Annotated Gilmore Girls, but alas, comes across as merely hit-or-miss for this particular episode.

Next up is a featurette called Gilmore-isms, which is a short collection of clips, from the first season of the show, featuring catchy pull-quotes and those obscure pop-culture references. Although it doesn't include all of these references - that would probably take about three hours - it is nice to have a lot of the memorable lines collected in this short montage. Still, this feature ends up being more fluff than substance because they provide no background for any of the references. Fun, but short and slightly pointless.

Finally, there are three deleted scenes included on this DVD set. There is one scene each from the episodes "Love & War & Snow," "Forgiveness and Stuff," and "Emily in Wonderland." They are all provided in Dolby Digital 2.0, and look and sound as good as the rest of the episodes in the set. The scenes provide some funny moments and references that were cut from the show, and although there isn't anything particularly earth-shattering here, it is nice to see the scenes included on this set.

Final Thoughts:
If you (like me originally) found yourself balking at the idea of giving Gilmore Girls a chance during its first season on The WB, then do yourself a favor and go pick up this DVD set. Yeah, that's right. I said it. Swallow your pride, go to your local Best Buy, and grab a copy of the show about the mother and daughter who are also best friends. You'll thank me for it, and trust me, it only hurts once. If the girl at the checkout counter snickers at you as she rings up your purchase, just tell her it's a present for your mother. That always works. She'll probably even say, "awwww." Who knows, maybe you'll even get her phone number out of it. And if you're far to "manly" to bite the bullet in the local store, then just get online and order a copy. No one will even know you bought it. For a show as funny, smart, and entertaining as Gilmore Girls, the temporary shot to your ego is definitely worth it.

I could go on for days about what a great show Gilmore Girls is, but instead I'll just leave you with a quote from Melissa McCarthy from the making-of featurette: "Just watch it. It's better than I make it sound." She certainly has a point, and the same goes for Gilmore Girls: The Complete First Season. It's definitely better than I make it sound. And while it could have been better, what we do have with this DVD release is a quality audio-visual presentation, and a few nice extra features. Not to mention some nice menus and packaging. Hopefully, Warner will learn from their few mistakes with this release and provide an even greater DVD set next time. But for now I'm incredibly happy to have Gilmore Girls: The Complete First Season in my DVD collection, and I say, bring on season two! The sooner, the better.