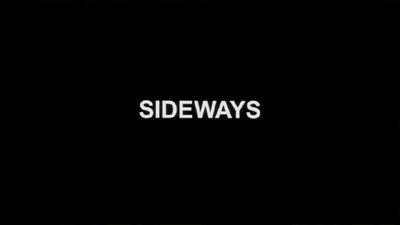 The Movie
Alexander Payne's past films have shown he can do broad social satire (Citizen Ruth), excellent adaptations (Election) and fantastic personal films (About Schmidt). The latest film in his canon is a bit of all three, presenting the story of two very different men who have a tenuous friendship based on very little common ground. Miles (Paul Giamatti) and Jack (Thomas Haden Church) are celebrating Jack's "last week of freedom" before he marries his fiancée, Christine. The celebration, engineered entirely by Miles, involves eating, playing golf and, most importantly, tasting wines. Jack, on the other hand, just wants to have sex with a few more strays before settling down.

The movie is focused almost entirely on wine. The classy alcohol defines the four main characters, Miles and Jack, and the women in their life, waitress/connoisseur Maya (Virginia Madsen) and winery pourer Stephanie (Sandra Oh). For Maya and Stephanie, it's a beautiful thing that should be appreciated. For Jack, it's a way to get drunk and get women drunk. For Miles, it's all there is. Miles is one of those people, like extreme Trekkies and the Scrabble freaks of Word Wars, for whom obsession takes over and prevents them from living a real life. If it's not wine, it doesn't matter much to him, including his job as a middle-school English teacher or his ability as a writer.

While on the surface the film is focused on wine, it's really about lying. Miles and Jack are almost habitual liars, to the point where Miles can lie to his own mother without regret. Even if they want to tell the truth, it's normally an impulse that comes too late to be truly meaningful. Lying is such a way of life that it's accepted between them, and is almost laughed off, such as Jack's lying about reading the latest draft of Miles' novel. When Miles catches his friend in the lie, it's met with some sarcasm, but no real anger. It's a theme in the men's relationship that sets them on a path for pain, at least for one of them. 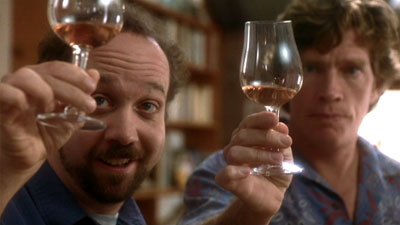 Giamatti is his usual amazing self, pulling every bit of pathos out of a character that no one would choose to associate with. How he can make an audience care about a person so thoroughly unlikable is his gift, and this movie gets as much milage out of it as possible. When he rants about Merlot, displaying the kind of misplaced priorities that usually make obsessives humorless, he's hilarious. When he's as pathetic as every middle-class elitist is in the end, he's actually worthy of the audience's caring. Put another actor in the role of Miles, and you might not get that same reaction.

Church is a revelation in his role as the raging ego, seducing women with no care as to their emotions or the effects his actions might have. With his flowing blonde locks and easy-going attitude, alongside Miles' middle-aged paunchiness, Jack's like a retired Norse god, on earth for a few kicks. Church has a confidence to his acting that he's shown in earlier roles, but here it is the perfect match for his character.

More impressive is Madsen, who I had all but written off after her part in the Britney Spears-produced Brave New Girl. She redeems herself here, looking radiant, while providing the film with a stable anchor that balances the world of grapes and the world of people who work real jobs like waitressing. The script only gives her so much to do, but in those small bits she grounds the movie in reality.

Mention certainly has to be made of Oh's role in the film, as the reason for schism between Miles and Jack. Oh can play just about any role, inhabiting the part as if it's a second skin. As a single mom looking for love, she captures the spirit of a group of women who need the freedom to pursue their happiness while filling all the roles of mother, father, provider and nurturer. Putting all that responsibility onto her shoulders makes Jack's lies all the more heinous. Only then can the lies being told be seen for what they truly are, instead of as a dialect spoken between two old friends.

Sideways isn't what one might call a feel-good film, and it's not a laugh riot. At the same time, its no tear jerker, nor is it an effecting drama. What it is, more than anything, is real. This is the truth about life, love and friendship, as seen through the warped prism of the glass of a wine bottle. 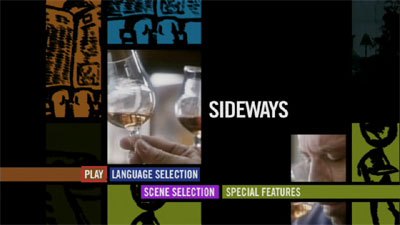 The DVD
The film was released on one DVD, packaged insert-less in a standard keepcase, that's sheathed in a pointless cardboard slipcover that repeats the identical cover art. If someone could explain why this is done, I would certainly appreciate it. If it was an artistic cover on the inside and the big-head marketing art on the outside, that would be fine. But that's not what happened here.

The animated anamorphic widescreen main menu, scored with a bit of the movie's pop/jazz score, uses the film's montages as a theme, and presents options for playing the film, language selection, scene selection and the special features. Language choices include English 5.1, and French and Spanish 2.0, while subtitles are available in English, French and Spanish. Closed captioning is available as well. The scene selection menus feature still previews and titles for each scene.

The Quality
The video quality is something of an unusual aspect for this film, in that it is far from the starched linen-crisp look of most modern films. As described in the commentary (see The Extras), Payne was trying for a '70s feel to the film, and he definitely achieved the soft, dreamy look that marked many of the classic foreign films of that time. Lens flares and a sunset color palette complete the look.

Bright lights tend to bleed and glow, and reds vibrate a bit. A film professor might point out that a film about lying doesn't have much in the way of definition in the image. There's no dirt or damage, and just a bit of grain that doesn't distract. The skin tones seem to be a bit too red, but that may be the settings.

The 5.1 audio is somewhat a case of overkill, due to the dialogue-heavy nature of the film. Everything, including the music and speech, is right up front. I didn't notice any real activity in the surround speakers, ambient or otherwise. It may just be my set-up, but the foreign language 2.0 tracks felt fuller than the very flat 5.1 dialogue.

The Extras
First up is the biggest extra, a full-length audio commentary by Giamatti and Church. The two seem to get along very well, displaying a very self-effacing sense of humor and a love for the ladies. Stories from the set are shared, themes in the movie are pointed out and generous amounts of compliments for the cast and crew are tossed about. These two are genuinely funny and keep a good level of energy up throughout the track, making it a good listen for anyone curious to learn more about the film. Overall, I'd be tempted to say this track is funnier than what's going on on-screen.

More than 17 minutes of deleted scenes are included, and can be viewed individually or in one group via a "play all" option. Some thought really went into the inclusion of these scenes, instead of the usual pile-of-deleted-scenes method. The section begins with a text introduction by Payne, as does each scene, as he explains why it was cut, and why it is included on the DVD. Each deleted scene includes part of the scenes before and after it, to help put it in context. One bit involving a dog might have been good in the movie, but it's understandable why it was cut. The rest are generally unnecessary.

A six-minute behind-the-scene featurette includes interviews with Payne and the main players, and probably was used at some point as an EPK on HBO or Showtime, but it's not too glossy or fluffy, as these pieces tend to be. Anyone who likes the film should take in this short but sweet look at the making of the movie. The theatrical trailer is also included, but for some reason, it's in letterboxed widescreen. 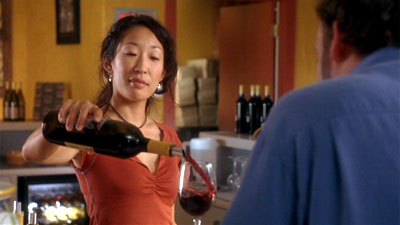 The Bottom Line
For all the raves Sideways received as a hilarious comedy hit, it's easily considered an excellent character study. I have certainly enjoyed Payne's previous films, and understand his sometimes ultra-subtle sense of the comic, but this one didn't have the laughs his other films have. Not that it needs them. With wonderful performances by the two leads as men on the verge of a lost life, this movie has all it needed to become a memorable production. The DVD is a bit light in terms of extras for such a high-profile, acclaimed film, but the material included is entertaining and interesting. This is a movie all film fans should take in, a top-notch example of man vs. man's nature.