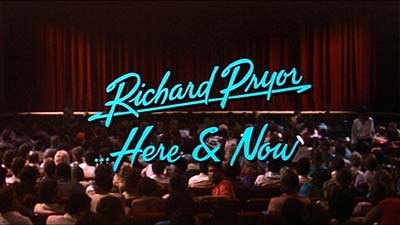 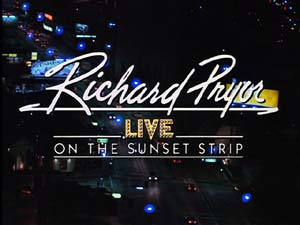 The Shows
It's generally accepted that 1979's Richard Pryor: Live in Concert is the finest example of Pryor's ability as a stand-up comice. It's also the only concert film he did before he lit himself on fire smoking cocaine. After getting his legs back by doing a few films, he made his return to the stage, with a pair of stand-up movies, Live on the Sunset Strip, his first live performance since the fireball incident, and Here and Now, which is a unique recording of an artist fighting his fans.

Pryor, Comedy Central's number one stand-up of all-time, was one of the most fearless men ever to stalk the stage. Nothing was taboo, no thought too out there. But he wasn't just a jester. He brought a social awareness to his act that few comics outside of Lenny Bruce displayed. No one could tell him what to do, as evidenced by the battles with NBC over the content of his short-lived TV series. Armed mainly with a belief in his ability, he was a force of nature.

But he was a different man by the time he did Live. Nearly killing yourself by smoking drugs will do that to a person. His first show back exhibited a Pryor few had ever seem before: a cautious comic testing the water before diving in. But the true Pryor peeks his head out about halfway into the show, as he starts talking about "the N-word" and why he won't use it to talk about people anymore. The thinking man's filth-slinger, he is just warming up, because he's got a topic people are just waiting to hear him talk about: how he blew up. 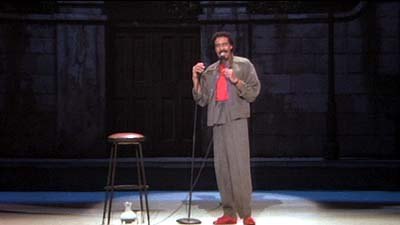 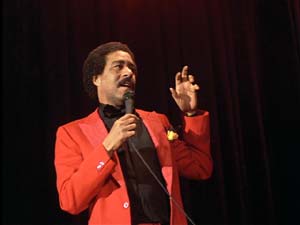 The story of how he almost lost it all is told with the lack of self-importance and sense of humor few former addicts would be willing to allow themselves. Giving his crack pipe a voice, he described his battle with addiction, the help Jim Brown tried to provide, the fire that engulfed him and the pain of recovery. It's a rare opportunity to watch a man build himself up from the low points of his life, rarer yet to see him do it before your eyes in 82 minutes, and amazing for it to be funny in the end.

With Live behind him, and his confidence back, he'd face a new challenge in New Orleans. The audience is unbelievably rude and aggressive, heckling Pryor mercilessly. There's no exact date on the disc, but it would be no surprise if this was shot during Mardi Gras. I was reminded of a Dave Attell show I went to where he was unable to string together three jokes in a row without interruption. The flow ended up being a struggle up-stream, in much the same way as this video.

Pryor takes it all in stride, and returns volleys as good as he takes them, but his act seems less solid than it was previously. Often it feels as though he's improvising, cycling through the thoughts in his head, or riffing on the crowd or stage. This is the kind of material opening acts rely on, not legends like Pryor. His oddly unnatural observational comedy set is out of place on this DVD, but eventually, he gets back to his bread and butter, with jokes about lynching and other fun subjects.

Pryor is at his best when talking about himself and playing charaters, which is exactly what he does in the second half of Here and Now. Marriage, politics, race and sex all get the once-over in this lengthy, fowl-mouthed perfomance. Comparing President Ronald Reagan to a phallic symbol, he proves he's still got it when it comes to portraying comedic emotion.

Two unique moments stand out here, as examples of what made him a special performance. When an audience member brings a hermit crab to the stage (along with a balloon sculpture), Pryor plays along, talking to the crap for a few minutes. The way he changes gears upon receiving the crab is almost childlike in its simplicity and innocence. It's a Pryor that calls back to the young comic who was having fun.

On the other end of the spectrum is his set on street life, complete with a performance as a junkie that for anyone else would be pure slapstick. But as his own experiences with illicit substances are well-known, there's another layer at work that gives the segment more meaning. Despite this, the crowd continues to twitter, uncomfortable with the seriousness of the moment, so they shout comments. That his fans don't understand him here is indicative of a larger issue, and proof that even at his zenith, he wasn't nearly as appreciated as he should have been.

The DVDs
The two discs, one show per DVD, are packaged in a single-width keepcase, with a tray and a two-sided promo insert that has no info on Pryor. Here and Now is a newly produced DVD, featuring static anamorphic widescreen menus, with options to play the movie, adjust subtitles, select scenes, and view promos. Subtitles are available in English or French, and the scene selection menus feature titles for each chapter stop. 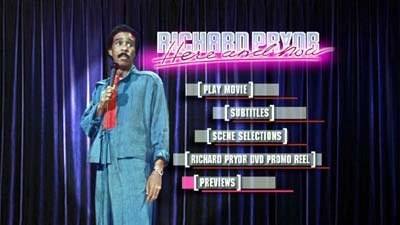 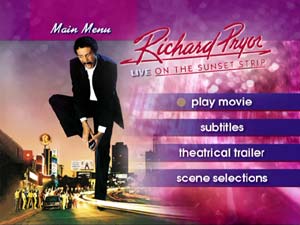 While Sony pressed a new disc for Here, Live on the Sunset Strip, on the other hand, is the same DVD the studio's been selling since 2000. How do you know one is new and the other isn't? Here and Now has the recently created Sony Pictures Home Entertainment logo and opening, while Live has the now-defunct Columbia/Tri-Star Home Video markings. The static full-frame main menu lets you view the film, change subtitles, check out the trailer and select scenes. Subtitles come in English and Spanish (so if you speak French or Spanish, only one disc in the set will make sense), and the scene-selection menus include still previews and titles for each scene.

The Quality
This is one of those releases that makes you think DVDs are produced by a gang of mentally-challenged chimps flinging poo at each other. Here's why: on Here and Now, there's a promo for the set. The promo, like the rest of the content on the DVD, is in anamorphic widescreen. In the promo is, obviously, footage of Live...in anamorphic widescreen. First off, it's just crappy to preview the footage in one format, and then present it in a weaker format, but it also seems like false advertising. If they have a widescreen transfer to pull promo clips off of, why not produce a new disc for this set. It just seems like a half-assed effort and a frustrating one for fans.

The original DVD release of Here and Now had an OK anamorphic widescreen transfer and an awful pan-and-scan transfer, and this release seems to repeat that performance, minus the pan-and-scan version. The video is grainy, noisy and soft, with a great deal of minor dirt and damage throughout. It's not the sharpest image, detail is slim and the colors are on the dull side, with the exception of Pryor's red shirt. This movie is showing its age and could use a clean-up badly.

Live is presented with the same ill-croppped full-frame image that the original disc had, mostly because it's the original disc. Well, how 'bout that. Though older than Here and Now, the video is in much better shape, displaying sharpness and detail that puts the later film to shame. Colors, such as Pryor's fire-engine red suit, are vivid, but there's some smearing. The video doesn't suffer from dirt or damage. Yet another thing to get frustrated about: the anamorphic widescreen transfer is weaker than the full-frame.

Aurally, the two discs are essentially the same, with each sporting a Dolby Stereo mix. The mix is front and center, with Pryor's voice playing at a higher volume than the crowd's reactions, with the proper separation necessary to make the jokes clearly audible.

The Extras
The only extras are promos, with Here and Now getting more of the content. The first disc features a nice promo for Pryor's Sony films, including Jo Jo Dancer, Your Life is Calling and The Toy. The piece is less commercial and more retrospective, discussing Pryor's different films in detail. There are also trailers for this set, and three "related" Sony releases. Live features the film's cute theatrical trailer. They just don't make trailers like this today. 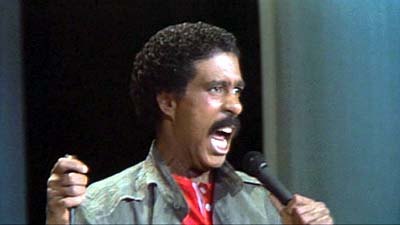 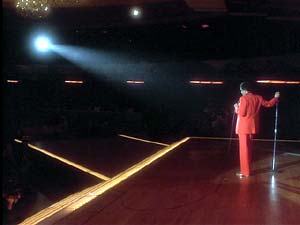 The Bottom Line
These two shows are less about Pryor the comic and more Pryor the survivor. Putting himself out in front of an audience after the whole freebasing fiasco was a risk, and the two rowdy audience almost make him pay for it. But with his quick wit and genius with a comeback, he pulls himself from the proverbial corner he paints himself into. Anyone who is considering upgrading can forget it, unless they either A) need to have the Pryor promo piece, B) want to get rid of their flipper version of Here and Now, or C) have money to burn. Those curious about Pryor can pick this up for the low price, or better yet, get Live in Concert, but otherwise, it's a mediocre repackaging of two good shows.