Paramount // Unrated // May 24, 2005
List Price: $36.99 [Buy now and save at Amazon]
Review by Francis Rizzo III | posted May 18, 2005 | E-mail the Author
In 10 Words or Less
The best (and last for a while) of Chappelle's series The Story So Far...
"Chappelle's Show" came out of nowhere to make Dave Chappelle a comic superstar, with a mix of observations on race and society and straight-up nonsensical comedy. When the DVDs of the first season were released, Paramount and retailers severely underrated the demand for the show, and fans were left empty-handed. In the end, the show became one of the biggest-selling TV DVDs of all time, and Chappelle received one of the biggest contracts in cable history.

DVDTalk has two reviews of the first season DVDs, by Randy Miller III and Aaron Beierle

The Show
"Chappelle's Show" came out of the gate in its first season firing on all cylinders, with ridiculously funny sketches like "Blackzilla" and "Clayton Bigsby, Black White Supremacist." Chappelle set the bar high for the show's second season, especially with DVD sales for the first season that were through the roof. If he was going to keep pace, he'd have to push even harder on the envelope he abused so often the first time around.

Though fantastic sketches like "Ask a Black Dude" were retired, they were replaced by even funnier bits, including the sketches that would become the series' signatures, such as Charlie Murphy's "True Hollywood Stories" and Chappelle's Lil' Jon imitation. Looking back, what seemed to be edgy in Season One, could have been on any sketch show, like "It's a Wonderful Chest" or "Crazy Camera." Instead, it was Season Two that established "Chappelle's Show" as something truly special.

Chappelle's biggest strength is pulling humor out of the truth in race relations, and two of his most hilarious sketches in this series came from these origins. "Racial Draft," which features representatives of several races claiming mixed-race celebrities as their own, is brilliant in the simplicity of the concept. When Mos Def selects Tiger Woods as 100-percent black, and he responds with a hearty "Fashizzle" it's just the start of a ridiculously great bit.

"The Niggar Family" is a simple word-play sketch, centered mainly around one word...that word. There was a comedian, whose name escapes me currently, who said if that word was just given another meaning, it would go out of use, and this sketch might be proof to the contrary. Chappelle plays the milkman of the ill-named family, in a sketch shot like an early black-and-white TV sitcom. As easily imagined, the N-word is thrown around like confetti, and it's very, very funny, as long as you can accept the use of the word. If you can't, get over it. 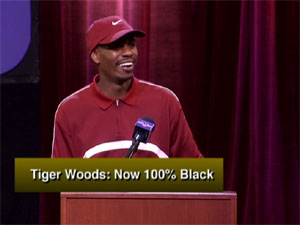 While these sketches are good, ask any casual fan of the comedian what their favorite sketch is, and you will probably hear, "I'm Rick James, bitch!" A pair of sketches were built around Charlie Murphy's stories about his Hollywood adventures with his famous younger brother Eddie. The first and most famous covers his interactions with the madness that is Rick James, who is portrayed with manic energy by Chappelle, complete with the dreds. Amazingly, they got the man himself to do an interview that's cut in to add some of his always-lucid insight. Chappelle's performance as James is so insane that only the true James could possibly come close to matching it.

Though not nearly as well-known, the other Charlie Murphy story is, in many ways, just as funny, and in some ways even better. This time, Murphy and his brother meet Prince (again played by Chappelle). Prince is so eccentric and unusual, that he makes the perfect foil for the extremely down-to-earth Charlie, and Chappelle plays him as the perfect caricature. The way the story plays out is the archetype of Chappelle sketches, blending an urban mindset with nonsense. The end of the sketch is so funny that it should be legendary by now.

What is legendary is the second to last episode, which features Chappelle quitting the series, an odd mirror to reality. To replace him, Comedy Central brings in Wayne Brady, who makes Chappelle jealous enough to come back, in time for one of the greatest sketches ever, as Brady plays against his character, showing Chappelle that he's "hard." What happens next should horrify housewives and drive everyone else into hysterics, culminating in a catch phrase to end all catch phrases. Unfortunately, if Chappelle doesn't get himself together, that could be truer than meant to be.

While the praise for the show is rather easy to deliver, there's a definite negative to the series, and that's the length of the shows. After removing the titles, bumpers, and Chappelle's wrap-around intros, the shows average just 12 minutes of sketches. That's an embarrassingly small amount of comedy, especially when it's so good. But on the plus side, as part of the non-comedy content, Chappelle brings in some of the best in hip-hop music to perform on the show, so even when the comedy is slim, the music is good, with Wyclef Jean, Big Boi, Q-Tip, ?uestlove and Mos Def on the mic. 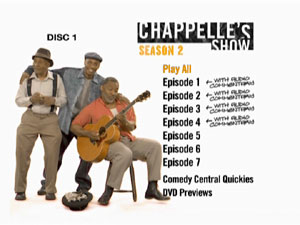 The DVDs
This time out, the show rates a three-disc presentation, packaged in a four-panel digipak fold-out, which has episode descriptions, and pictures of Chappelle's characters. The discs feature full-frame animated menus based on the opening credits of the series, with a play-all option, individual episode lists, and audio commentary indicators. The remainder of the special features are found on the third disc. There are no audio options or subtitles, but the discs are closed captioned.

Regarding the "uncensored" nature of the DVD: The cursing flows free, which can be less humorous at times, but the boobage is, for the most part still pixelated, as the girls, with the exception of one unpixelated woman, weren't actually completely nude. Think "Reno 911!"

Also, according to the packaging, "Some songs/musical performances featured in the original broadcast versions of the show are not included on the DVD set." I'm not certain who changed, but I believe it might be Big Boi's appearance on episode 13.

The Quality
These full-frame transfers look as good as they ever have, with vivid colors and barely a bit of grain. Though not as crisp as might be expected for such recent video, in general, this is as good as you'll ever see this series. Some sketches don't look as good as others, but that looks to be an issue of the shooting location than the DVD presentation. There are no obvious compression errors or damage.

The Dolby 2.0 tracks present relatively simple audio, without delivering much in terms of dynamic sound. As a standard cable-series soundtrack, everything sounds just as one would expect it to, from the dialogue to the music, without any distortion.

The Extras
Five audio commentaries, with Chappelle and his writer Neal Brennan, are included, with four on the first disc (episodes one through four) and one on the second (episode 12). The duo are obviously extremely comfortable talking about the show together, and they have plenty of share, talking about how they came up with the ideas, behind-the-scenes information and the struggles they had with censors. They have plenty of thoughts about the series and comedy, while Brennan tries a bit too hard to throw in funny bits. For any fan of the series, these tracks hold plenty of interesting material.

On disc one, there are also two Comedy Central Quickies (clips from the shows) for "Reno 911!" and "South Park," and four DVD previews, including one for "Richard Pryor: I Ain't Dead Yet #*%$#@!! - Uncensored" that features Chappelle saying "He is f*&king crazy," which is pretty funny considering recent rumors.

A third disc of extras is included for the second season, with plenty of additional footage. First up is 17 minutes of what is labeled as "Dave's Extra Stand-Up." What it is, is unused footage from Chappelle's wrap-arounds on the show. Mostly, it's him riffing, talking about fighting, what you can't say on TV and hats. Since it's Chappelle, he sells it, but it's not as funny as the rest of his material.

That's followed by an impressive 72 minutes of bloopers and deleted footage, split up into the 19 scenes they are culled from or viewable in one lengthy chunk. The presentation is well-done, as each set of clips is preceded by a title card, and when explanation is needed, it's provided with text. There's some gold in here, in terms of unused material and behind-the-scenes fun, especially the "Black Bush" bits, but there's a lot of goofiness to get through as well. An optional commentary track with Chappelle and Brennan runs the length of the play-all option, providing another 73 minutes of enjoyment. That's right...one minute more.

The rest of the extras have a distinct Charlie Murphy flavor, with three of the four remaining featurettes featuring him. In the first, he shares his memories of Rick James, before James passed. He follows them up with two other stories, one about beating up a guy who wouldn't stay down, and the other about doing security for his brother. These are done in the same style as the stories he tells on the show, just without Chappelle's recreations. Murphy is an energetic storyteller, and he never gets boring during the length of these 44 minutes of talk.

The final extra is the full-length Rick James interview that the show's clips were pulled from, an interview that's over 20 minutes long. Sitting off-screen, Brennan took the stories that Murphy told and asked James about them. In response, James essentially says the complete and utter opposite of what Murphy said in the show. In the course of the chat, he makes fun of Prince, the Navy and especially Charlie Murphy. This is a trip to watch, but you can make your own decision on who is telling the truth. 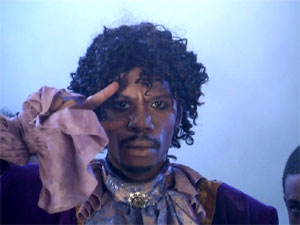 The Bottom Line
After an excellent first season, "Chappelle's Show" hit a new high in terms of creativity and pure comedy in the second go-round. Many of the series' most memorable moments came from this season, including some that are particularly interesting in light of the star's recent troubles, like the two shows that see him quit the series. The DVD presentation is very good, well surpassing the treatment the first season received, including an entire additional disc of supplements. The only thing holding this set back is the way the shows are done. You will be done watching this series before you know it, because the episodes are so short. Despite that, this is a must buy, as there is very little on TV that matches it in terms of laughs.