"When I first hear the word Jaws, I just think of a period in my life when I was much younger than I am right now, and I think because I was younger, I was more courageous...or I was more stupid. I'm not sure which. So when I think of Jaws, I think about courage and stupidity...and I think of both of those things existing underwater." -Steven Spielberg

Easily one of the most successful and infamous thrillers of all time, Steven Spielberg's Jaws (1975) remains the undisputed grandaddy of the modern summer blockbuster. The first film to gross over $100 million in ticket sales---though it's an inflation milestone, more than anything else---Jaws was seen and re-seen by over 67 million viewers during the season of its theatrical release. John Carpenter's Halloween (1978) and Ridley Scott's Alien (1979) would really get the horror machine rolling a few years later, but Jaws terrified audiences with a visceral tale about man versus nature...or, in this case, men versus nature.

Representing the human race: Police Chief Martin Brody (Roy Scheider), a New Yorker who recently relocated his family to Amity Island, a peaceful oceanside town in New England. There's also Matt Hooper (Richard Dreyfuss), a wealthy young shark expert who's been called in to help the community. Last but not least, there's Captain Ahab Quint, a grizzled old shark hunter who offers his services for a stiff price (and a case or two of apricot brandy, of course).

Things start off with a bang when a young woman is brutally killed during an early morning swim. The peaceful community of Amity Island had never encountered a murder in the past 25 years, though Chief Brody determines the death to be related to a shark attack. He tries closing the beaches to prevent more accidents, but his efforts are continuously blocked by Mayor Larry Vaughn (Murray Hamilton), owner of the tackiest sport coats you'll ever see. Vaughn has the town's economy in mind, so he's more concerned with the upcoming Fourth of July celebration than the safety of local swimmers. After a second death, Matt Hooper is called in. Eventually, Quint's fee of $10,000 doesn't seem so expensive, and the stage is set for our three heroes to begin their hunt.

Director Steven Spielberg was still in his twenties when Jaws was produced, fresh off Sugarland Express (1974) and his made-for-TV masterpiece, Duel. The latter film first introduced us to the isolated hunting grounds that Jaws would later return to, though this time we're not always certain who's actually doing the hunting. A simple plot and tight pacing make Jaws easy to get into, but its other strengths really round out the package nicely. The film's memorable music theme is a permanent part of pop culture, the acting---especially by our three leads---is quite good, and the top-notch effects still don't feel out of date. 100% CGI-free, Jaws looked good then and still looks good now.

Despite its simplicity, the story is another highlight: based on the best-selling novel by Peter Benchley, Jaws was adapted from a screenplay by the author and Carl Gottlieb. While a number of items were changed from the book and original script---including the fate of Quint and several key underwater sequences---the end product shows that Jaws wasn't a film that was hastily thrown together. The pacing is tight all the way through, but the film's third act is the real star of the show: once our heroes are out to sea, things really pick up. Character interaction between the three leads is believable and interesting---showing that the tension isn't always between man and nature---and the film's memorable climax is a perfect release from the tension, but simple enough to be satisfying. In all aspects, it's the total package: though the modern summer blockbuster isn't usually associated with anything other than dollar signs, films like Jaws show that things weren't always this way.

Another thing that hasn't changed in the film's 30-year history is the superb design and presentation; in short, it does a terrific job of looking much bigger than it actually is. Underwater shark footage---primarily the scenes where Hooper is attacked in his "anti-shark" cage---was shot separately by Ron and Valerie Taylor in Australia and edited in later. The majority of the film's footage was shot on location in Martha's Vineyard, a location Spielberg preferred because the could go "12 miles out to sea and still have a sandy bottom 30 feet below the surface of the water, where the mechanical shark could function". Still, there were many problems along the way; in particular, the mechanical shark was often non-operational during many key sequences. This problem led to the director's solution of using the camera for several "shark point-of-view" shots as a substitute, which turned out to be a blessing in disguise. Visually, the film packs a rock-solid punch and still scares people away from the ocean---and that's something that any number of watered-down sequels can't take away.

The film's 25th Anniversary came and went in 2000, marking a pair of great DVD releases from Universal. Both versions---a Collector's Edition and a DTS Edition---featured different sound mixes and a handful of great bonus features. Universal ups the ante for the 30th Anniversary double-dip, offering a solid 2-disc set that corrects a few mistakes made the first time around. Even without a commentary track by Spielberg---which, given his stance on commentaries, would have been recorded in Hell as it froze over---this is a release that excels in all departments. In a time where double-dips are often shameless marketing ploys to promote sequels and other such nonsense, it's refreshing to get one for all the right reasons: Jaws is a classic film, deserving of its praise, success, and the best presentation possible. To make matters a little easier, the following review contains comparison ratings for all three DVD releases. To make a long story short, though: yes, it's worth buying again.

If it ain't broke, don't fix it. Well, Universal could have given it a liiitle tune-up, but the 2.35:1 anamorphic widescreen transfer looks just as good as it did back in 2000. The color palette is strong and accurate, contrast levels are excellent, and only the darkest of scenes are a bit on the murky side. There are no major instances of edge enhancement or other digital imperfections, with only a minor amount of dirt and grain keeping this transfer from being perfect. While a dirt-free transfer would've been the icing on the cake, this visual presentation is (still) a fine effort from Universal.

DTS disciples may be scratching their heads right now: after all, how could the original release lose to this 30th Anniversary Edition? Well, the addition of the original 2.0 Mono audio track, for starters. In fact, there's a plethora of other choices here, including the 5.1 and DTS tracks found on the 2000 releases, as well as new Spanish and French 5.1 tracks for the English impaired; in short, a little something for everyone. All of the tracks sounded great in comparison: purists will likely favor the original mix, but 5.1 and DTS lovers can finally have both tracks on one disc as well. The main feature is presented with optional English captions or French and Spanish subtitles (the latter is a new addition to this release, though the English captions are now smaller but still easy to read). 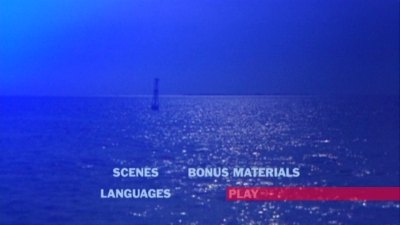 The overall presentation has been polished a bit, though the anamorphic widescreen menus (seen above) are basically the same. This isn't a problem, though; I may be in the minority, but I've always liked 'em for their simple design and easy navigation. The chapter divisions are also identical, as this 124-minute film has been broken into a modest 20 chapters (no layer change was detected during playback). Bonus features are presented in non-anamorphic widescreen and fullscreen formats, but this release also adds captions and subtitles to all the appropriate extras (thumbs up!). The packaging design is also slightly polished, with the cover art sporting a darker, more ominous atmosphere that looks fresh without compromising the classic design. This 2-disc set arrives in a single-width keepcase, housed inside a double-width slipcase (along with a nice little bonus, covered in more detail shortly). All things considered, it's a really sharp-looking package for the asking price.

This 30th Anniversary Edition offers a terrific assortment of bonus features, several of which missed the boat the first time around. So let's just skip the small talk and get right to the details, shall we?

New features: The first and most notable addition to this release is the complete Making of Jaws Documentary, produced and directed by Laurent Bouzereau. With a total running time of just over two hours---much longer than the trimmed 59-minute version found on the earlier releases---this documentary, originally produced for the Jaws laserdisc, is one of the best you'll ever see. Covering nearly every aspect of the production and post-production, we hear from several members of the cast and crew (as well as author Peter Benchley, below left). Fans have been clamoring for this complete documentary on DVD since before the original releases came up short, so they can rest easy now. 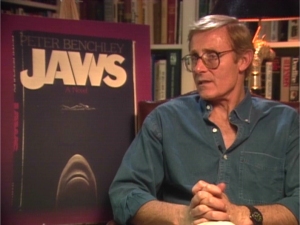 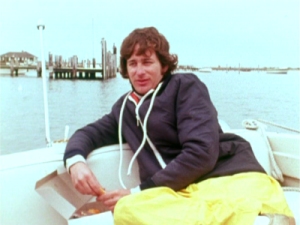 Also new here is From the Set, an interesting little featurette originally produced in 1974 (found on the first disc, 9 minutes). It's a great vintage piece from the set, hosted by Iain Johnstone and featuring words from Steven Spielberg (above right, casually enjoying a snack) and other members of the cast and crew. There's also a few new additions to The Jaws Archives on the second disc, including slideshow presentations of a Poster Gallery and The Jaws Phenomenon, a brief look at marketing and promotional material from around the world (below right). Last but not least, there's also some nice printed material here: a limited edition 60-page Commemorative Photo Journal has been included in the slipcase. It won't show you much that the documentary hasn't, but it's still a nice inclusion.

Still on board: Universal got some stuff right the first time around, didn't they? Returning to this edition are a selection of Deleted Scenes and Outtakes (relocated to the first disc, 14 minutes total). These deleted scenes are hit or miss, but it looks as if a new one---featuring Quint, shortly before our heroes set sail---has been tacked on at the end. Also returning (now on the second disc) are the majority of The Jaws Archives, including a selection of Storyboards by illustrator Tom Wright and a series of Production Photographs (below left: Spielberg holds on for dear life).

NOTE: This concludes the proper list of bonus features for the 30th Anniversary Edition. 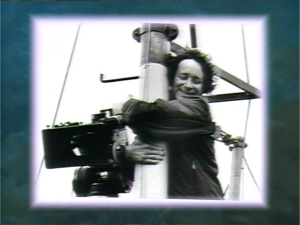 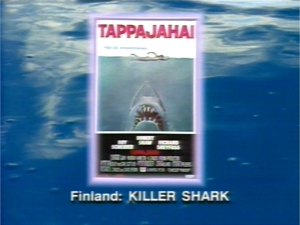 Deep-sixed: There's a few features that didn't make the cut this time, and I agree with all but one of 'em. Missing in action are the Trivia Game, Shark World (educational featurette), Production Notes, Cast Filmographies, Recommendations and a Screen Saver; no big deal, since they weren't all that interesting. Unfortunately, the classic Theatrical Trailers are also nowhere to be found (unless they're a super-secret Easter Egg or somethin')---and they're some of my favorites! "It was as if God created the Devil and gave him...jaws!" Bummer. Still, the excellent new additions to this release---especially the complete documentary on the first disc---more than make up for it.

Ladies and gentleman, we have a new champion! The Collector's Edition and DTS releases from 2000 were great efforts for their time, but this new 30th Anniversary Edition meets or beats the originals in every department. Armed with a complete set of audio tracks, a more polished presentation and a near-definitive assortment of bonus features, this is the best Jaws gets on DVD. Owners of previous versions will certainly want to upgrade this time around: it's missing the trailer, but Universal's done a fine job of packing all the necessary stuff on this 2-disc set. There's a great deal of content here for the asking price, making this release a must-have for any DVD library. Be sure and pick this one up immediately---from top to bottom, there's no reason not to. Very, very Highly Recommended.