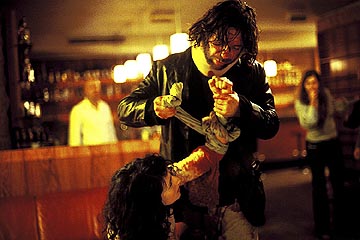 Cahit Tomruk (Birol Unel) is a 40-something German Turk living a life that seems to be a never-ending vortex of hard drugs and alcohol abuse. At a night club where Cahit picks up empty beer bottles and recycles them for change no one seems to notice the unshaved Turk. After an excessive night of binge-drinking Cahit leaves the club and crashes his car head-on into a brick wall barely escaping his death. Unconscious, with a face covered with shattered glass, Cahit is taken to a nearby hospital where he meets Sibel (Sibel Kekilli), a German-Turkish woman that has attempted to commit suicide. Sibel is fed-up and enraged by her ultra-traditional Turkish family wanting to shape her future life. She offers Cahit to marry her in order to have her freedom back and enjoy a life devoid of her Muslim family's religious supervision. Cahit impulsively agrees accepting Sibel's proposal with the understanding that both of them will be free to see other people. What starts as an arranged marriage of interest, however, soon evolves into a complex relationship full of unbridled passion.

Without a doubt one of the strongest feature films to come out of Europe in a long time Fatih Akin's Gegen Die Wand (Head On) surely stirred up the hornets' nest in its native Germany. The film is a brutal portrayal of immigrant life in Germany and especially the struggle of German Turks to adjust to a society that often contradicts their Muslim beliefs. Not surprisingly Gegen Die Wand resonated strongly with German film critics and was the first German film to win the coveted Golden Bear Award at the Berlin Film Festival in eighteen years. 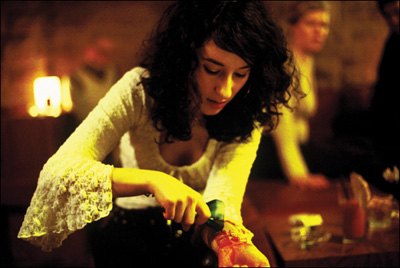 To say that Gegen Die Wand is a controversial film is to merely scratch the surface of an otherwise deep, emotional, and above all utterly realistic drama. I can hardly think of another film from recent years that moved me as much as Gegen Die Wand did. The "realness" effect in this film is absolutely striking. The life of the main characters reminded me how all of us rather often than not choose to intentionally neglect the existence of people among us that do not fit whatever societal norms we might have self-imposed. In fact, to add to the controversial character of the film the director Akin went against all odds to offer the main role of Sibel to the well known in Germany adult film star Sibel Kekilli.

The emotional impact that this film has over its audience has been compared to Gaspar Noe's now notorious Irreversible and I tend to agree that there are indeed some similarities. While Irreversible, however, was a mind-chilling horror story of rape and its consequences Gegen Die Wand is a rather human portrayal of a generation of German Turks trapped between past and present. In a German society that does not accept them as Germans and a traditional Turkish community that looks upon them as half-Turks the likes of Sibil and Cahit are left with nothing but an unfair struggle to prove themselves. Ironically while some choose to fight others, like Sybil and Cahit, merely accept their fate and end up in a human spiral of never-ending collapses. 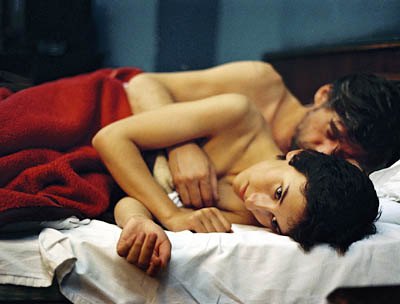 Shot on locations in Germany and Istanbul, Turkey Gegen Die Wand offers some impressive cinematography. Fatih Akin's camera is smooth, bold, and ultimately painfully convincing. What other directors would have probably avoided showing on the screen Akin has masterfully shot with the eye of a director knowing how to capture human degradation without glorifying it.

While looking at the impressive list of musicians that contributed to the soundtrack of Gegen Die Wand including such notorious acts as Depeche Mode and Sisters of Mercy I couldn't help but draw a parallel between David Gahan, Depeche Mode's lead singer, and Sibel's character both attempting to put closure to their misfortune by committing a suicide attempt. I felt deeply moved and somewhat ashamed by the fact that in this age of supposed tolerance we are still struggling to recognize what we don't agree with.

There are some painful similarities between the Turkish gasterbeiters (a nickname for Turkish unskilled workers) in Germany and the thousands of undocumented Hispanics in America. They both seem driven to the outskirts of the societies they live in and their stories are often filled with bitter disappointments. In Gegen Die Wand Fatih Akin has not only captured the essence of immigrant life but created a realistic portrait of human bitterness that will surely have an impact on you. 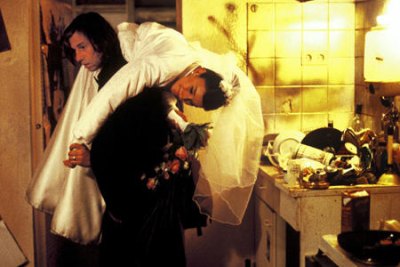 Presented in its original aspect ration of 1.85:1 and enhanced for widescreen TV's this R1 release of Gegen Die Wand looks deceivingly good. Contrast looks perfect, tone colors very well-handled, and image quality generally free from any print damage. HOWEVER, I have very strong suspicions that Strand Releasing, the distributors for the US, have used the German print of Gegen Die Wand without accounting for the format discrepancies. When the image is paused I see some substantial blurring and quite often in fast motion sequences the image simply overlaps therefore creating a very distracting effect. This is a serious disadvantage that I think will cause many problems for viewers with high-end progressive equipment. With this said, I think that if you are on the market for this film you should definitely wait and see until Soda Pictures releases their R2 UK version later this month as it may very well be the winner between all English friendly releases so far. I shall be reviewing the R2-UK DVD of Gegen Die Wand as soon as it reaches my mailbox. *(Please note that all screen captures in this review are "media-shots" and are not directly taken from this R1 DVD).

The Making of Gegen Die Wand-

Final Thoughts: Gegen Die Wand's final English friendly version I believe is yet to be released. While the film looks deceivingly good on this R1 DVD there are in fact a number of hidden issues that in a long run one will be quite unhappy with. On the strength of the film alone I would give Gegen Die Wand the highest possible mark. As far as DVD presentation however I think that one should wait until the R2 release is being reviewed in order to determine which presentation is the best one to own.

Addition: After reviewing all three English friendly versions currently on the market the R2-UK disc clearly appears to be the winner. For more info read the review for the R2-Soda Pictures release.