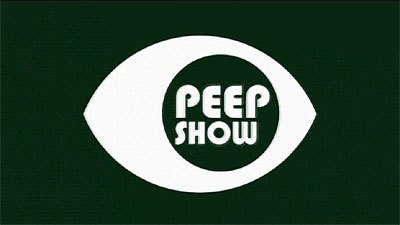 
The Show
If you read my review of the first season of "Little Britain", you'll know I am hesitant about British comedy series that come to America bearing hype. That show beat the odds, as did "The Office" and Graham Norton's series. But in my history with British imports, I've been disappointed more often than not, so my defenses remain strong.

So I began reading about "Peep Show" and I became intrigued. A uniquely filmed series that utilizes point-of-view cameras, with a twisted sense of humor. That's the kind of show I will check out any day. Unfortunately, once I did, I realized a gimmick can only take a series so far. Then, when you need the characters or stories to carry the show, this series comes up short.

Roommates Jeremy (Robert Webb) and Mark (David Mitchell) are opposites. Jeremy is a slacker, drug-using, wannabe musician, while Mark is a buttoned-down office drone with no social sense. They don't get along particularly well, especially when Jeremy doesn't have his half of the rent, which is often since he doesn't hold down a job. It gets worse when Jeremy, or Jez, messes things up for him with women, which again, is often. 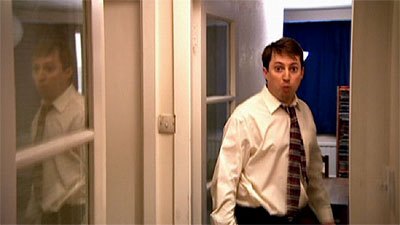 The women in their lives are no winners either. Toni, a neighbor, is looking for a good time with just about anyone who will offer it, with the exception of Mark and Jeremy. Sophie, a co-worker of Mark's, throws herself at him and then rejects him shortly thereafter. Of course, if you knew this nebbish geek, you'd probably think of ways to torture him also. The fact that she keeps coming back to Mark after all the bizarre things he does around her makes one question if Mark is even smart in lusting after her.

The plots of the six episodes are rather simple, but not exactly textbook, ranging from Mark thinking he may be having a gay crush to Jez trying to get sex thanks to his uncle's death. Of course, there are little goings-on in the background of the episodes, but they tend to stick to the point. Complicated storylines aren't exactly a strength of this show. On the other hand, the show knows how to be adult. Drug references, sex, swearing and urinating into desk drawers are regularly found on this series. It can get to be a bit much, especially when Jez' even-more-annoying buddy and bandmate Super Hans is involved.

The camerawork, often accomplished through a camera between the actor's eyes, gives the show a unique look that can get to be annoying for a viewer raised on traditional multi-camera sitcoms. To watch a scene of this show flip back and forth from perspective to perspective can be disorienting and disturbing as well, especially during kissing sessions. On the other hand, during sex, the angle gives the action the proper sense of humor, preventing it from being sexy.

That gets to be something of a theme for the show. Imagine a sitcom with two George Costanza's on it, where neither can get much of anything going on, and both complain often and both are annoying as hell. Now shake the camera frequently. Stir and serve, and your enjoyment will be determined by your interest in the oddness of what's going on. 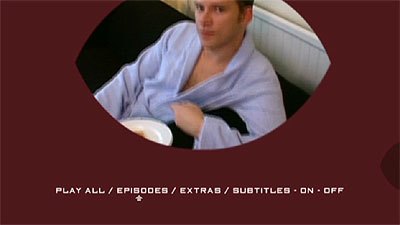 The DVD
The first six episodes of "Peep Show" are packaged on one DVD, in a standard keepcase. The disc features an animated anamorphic widescreen main menu that gives choices to play all the episodes, select individual ones, view the extras, and adjust the subtitles. The episode selection menus include a five-scene breakdown, tiny animated previews and commentary options where available. There are no language options or closed captioning, but English subtitles are included.

The Quality
Because of the way this show is shot, the video quality can vary dramatically, but it doesn't get too high at any point. At its best, when the footage is shot with a head-on standard camera, the anamorphic widescreen footage is solid, with a modicum of grain and noise, quality color levels and a decent amount of detail. When shot from the head-mounted cameras that give the characters' direct perspective, the video drops quite a bit in terms of the quality, becoming much grainier, with washed-out color. Detail also takes a hit, becoming soft and fuzzy, especially in darker locations.

The sound isn't very impressive either, with a simple Dolby Digital 2.0 track. But since that's what it originally aired with, so what are you going to do? Everything is front and center, without much in terms of dynamic sound. Considering the show puts you in the shoes of the characters, a nice 5.1 mix that put you into the sound mix would have been sweet.

The Extras
Nothing too impressive on this disc in terms of bonus features, starting with a pair of audio commentaries (found on the first and last episodes) with series writers Jesse Armstrong and Sam Bain and actors David Mitchell and Robert Webb. Besides a mix that is a bit too low, the conversation isn't the most energetic and is in fact somewhat boring at times. Considering how unique the show is, I expected more from the people behind it, but they seem to have dropped the ball.

The rest of the extras are video clips that somewhat relate to the series, but shift the perspective from the characters to a video camera. Two sections split the six clips between the two characters. Mark's section includes an awful, embarrassing video resume, which is possibly the best of the extras. His incredible desperation is sadly funny. The other two have Mark trying to tape Jez and Sophie reading a book for Mark's father. They essentially repeat the themes from the show, and aren't all that entertaining.

Jeremy's section begins with his audition tape for "Big Brother", which like Mark's reading clips, just confirm his personality, that of a very annoying person. Connecting to the final episode of the disc, Jez' "Last Will & Testament" is similar, as he doles out his possessions in preparation for his death. The final extra is a ridiculous 2:27 video for his song "Outrageous" a.k.a. Celsius 488 1/3. In it, the song that made Mark and Toni laugh in episode one scores a montage of people in political masks, including George W. Bush and Tony Blair, in a number of naughty positions. For fans of insanity, this is like a needle of heroin. 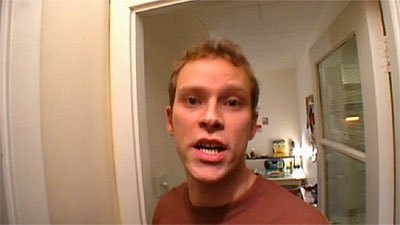 The Bottom Line
The concept of the show is interesting, to see a sitcom world through the eyes of the characters, but the execution is somewhat lacking. It might be the characters, which are generally all unlikable. It might be the editing, which could cause nausea, epilepsy or both. Or perhaps its just the stories, which depend in large part on cursing, bodily fluids or sex for laughs. But no matter what, the show starts out interesting and then repeats itself for five episodes. The DVD look and sound OK, with a slim amount of bonuses, but nothing that will make it worth buying this DVD. Instead, give it a rental. You may find it to be up your alley.