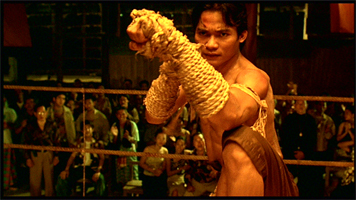 If you follow foreign cinema at all and are an action movie fan you have heard of 2003's Ong-Bak: The Thai Warrior. If for some reason you haven't its time for you to crawl out from that rock you're living under and check out one of the most amazing action films to come out in a long time.

We've all seen Jackie Chan and Jet Li movies, but newcomer Tony Jaa takes things to an entirely new level. When watching Ong-Bak you have to keep in mind the fact that Jaa isn't using any stunt doubles and every thing you see him do is all his own skill. There are no wires attached and no assistance from a computer or special effects, this is pure martial arts at its finest (Muay Thai to be exact).

I don't know about you, but wire-fu movies are getting pretty stale with me. If I have to sit through another "action movie" where the main characters run atop of trees or jump twenty feet I may just scream. That's what's so refreshing about this movie. Everything has an old-school feel with so much grit and style you'll wince when you see someone take a beating. In fact if a film were to be rated solely on its action, Ong-Bak: The Thai Warrior would be the Casablanca of our time. Unfortunately, you can't score a movie entirely on style.

To set up the elbow and knee bashing fightfest we are taken to the small village of Nong Pradu. These folk are far separated from the craziness of Bangkok and are often referred to as hillbillies (and not quite the Beverly type either). When a sleazy guy named Don comes to town and steals the head of Ong-Bak (Nong Pradu's Buddha) its up to Ting (Jaa) to get it back before the village is doomed. This takes Ting to Bangkok where he runs into Humlae (Mum Jokemok) and his younger sister Muay (Pumwaree Yodkamol).

Humlae is also from Nong Pradu but refuses to face his past so instead he's a rather scummy character that would rather exploit Ting's fighting abilities to his own personal gain. Inevitably the trio find themselves caught up in crime of a much grander scale than the lone Buddha head and it's up to Ting to battle his way to the top. Unfortunately for the film the lead bad guy is an old man in a wheel chair with a voice box. I just have a hard time buying this guy as being all that scary and influential enough to be the big kahuna. He's just so out of place in a movie like this that it's almost funny. 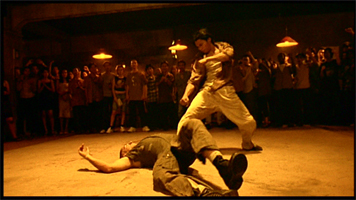 While Jaa doles out a solid performance as Ting, much of the supporting cast feels like they're just kind of there. The bad guys have a cheesy attitude about them that makes it hard to take them seriously, but it works well to add some humor at least. I never found myself liking Humlae's character at any point in the film and honestly I think the movie would have been better off without him. Sure his sister Muay is cute and all, but her voice sounds like a Thai version of the Nanny on helium; it's almost unbearable.

Questionable plot lines, and one dimensional, uninteresting characters aside, there are a lot of breathtaking martial arts scenes in Ong-Bak. The sheer athleticism of Jaa will leave your jaw hanging and your mind reeling. He's really that good. Sadly, while he performs his own stunts, he doesn't have the charisma of Jackie Chan or the screen presence of Jet Li. Give the guy some time though and he'll be in every Hollywood action movie before you know it. Whether he's leaping through barbed wire, jumping over cars or just kicking the crap out of someone, Jaa looks right at home doing it.

Most of the film is shot creatively with awkward camera angles during the more visual and dramatic moments. I suppose that's the substitute for stunt men, wires and special effects and for the most part it works well. What bothered me about it though was the face that nearly every cool thing that Jaa does is repeated a second (or third) time from a different angle. Once or twice in a movie for effect isn't really a bad thing, but when it happens four times in the same sequence you know you're doing it a little too much.

Ultimately you're going to watch Ong-Bak: The Thai Warrior for the action and not much else. The plot is paper thin, predictable and even though it serves a purpose it gets deeply outshined by the finesse of Jaa's athletics. After watching this movie you have to feel for the crew considering the beating that they apparently took. A few loose teeth and some broken bones are a small price to pay for box office success though right?

Ong-Bak: The Thai Warrior is presented with a 1.85:1 anamorphic widescreen transfer and is a decent looking picture. There are some inherent problems with edge enhancement and specks in the image though so the quality is not without flaw. The colors appear to be natural although there are a lot of browns that really dull the overall look of the film.

I didn't notice any pixilation or much of any softness to the picture and for the most part things remain very sharp. For a movie with as much action as this one has you want things to be as crisp as possible and in the well lit scenes that's what you get. The darker scenes show quite a bit of grain and when heavy shadows are used the picture can get fairly muddled.

Featuring a Thai 5.1 Dolby Digital and English 2.0 Dolby your audio experience will change depending on which track you listen to. The original Thai language is obviously the best choice here and the surround features a decent channel mix. Much of the action comes at you from all sides but it doesn't feel as impacting as it should with little variances in quality. The English track is mostly front channel stuff but features some pretty bad voiceovers with wooden acting and an overall muffled sound. For subtitles you get your pick of English and Spanish if for some reason you aren't fluent in Thai. It may matter to some people more than others that the subtitle selection here is apparently for the hearing impared. Meaning that you'll see stuff like [hip-hop], [man grunting] and [birds chirping].

It's quite evident that France adores Tony Jaa and Ong-Bak considering that two of the bonus features involve French performances. One of these is basically a Muay Thai show and tell where Jaa and some stuntmen go to town in front of an audience. It's only about two and a half minutes long, but it's pretty cool to see some of the same moves used in the film done before a live audience. The other French feature is a rap video (Tragedie 'I'm Still Ghetto' Featuring Reed the Weed) with clips from the movie and Jaa doing some martial arts in a ring. 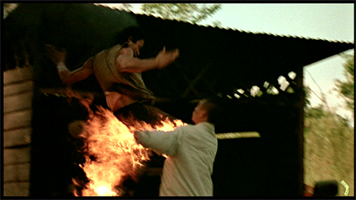 The DVD also features a segment called "the movements of Muay Thai" which is just under two minutes of a demonstration for some of the maneuvers of the style. It's kind of cool to see, but in context you see all of these moves during the course of the movie and sometimes even find out what they are called. There is also a seven minute behind the scenes look at the making of the French rap video, but honestly I would have rather seen a look at the making of the movie. Thankfully the B-Roll provides some of that.

If there is any doubt in your mind that Jaa is actually performing the stunts or that he's actually hitting people in most scenes, do yourself a favor and watch the B-Roll. There are only three scenes to look at for some of the extra takes, but they're pretty interesting. My personal favorite was the scene where Jaa's legs are on fire and you see them actually ignite his pants and he kicks a guy in the head while his feet are on fire. It's absolutely amazing stuff and almost has a Jackass vibe to the stunts that they pull.

The rest of the stuff on the disc is mainly promotional material with teasers, trailers and a fluff video with RZA (Wu-Tang). While there's enough stuff to talk about on this release, in the end there isn't an awful lot to consider "bonus features". I really appreciated the B-Roll, but with only three scenes to look at it feels rather skimpy. Maybe in the future we'll see a more prominent release, but for now this one is acceptable extra-wise. 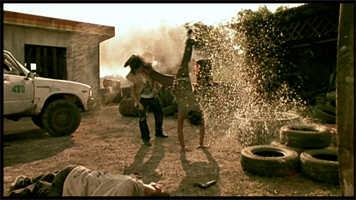 I have to admit that I'm really torn about a rating for Ong-Bak: The Thai Warrior. I was absolutely blown away by the action, stunts and overall style of the film, but there really isn't a lot of story. I never got the feeling that the characters were anything but placeholders to take a boot to the head and aside from Jaa's character Ting, no other characters are interesting. Even with that in mind though, I walked away from this movie absolutely loving it and that's entirely because you don't see this type of action this day and age.

Action fans will be in heaven with Ong-Bak, but anybody looking for an intriguing story will be left out in the dark. It's pure popcorn movie material and is a lot of fun though so I'm going to highly recommend it for action fans, but only recommend it for everyone else.