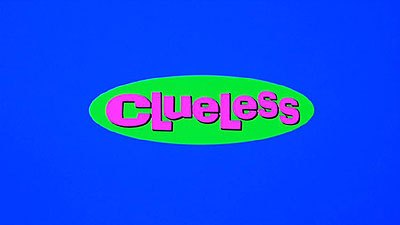 
The Movie
First, let's set the record straight. Despite my love of Moulin Rouge, Avenue Q and "The Golden Girls," I am a straight, 27-year-old guy. Therefore, it might be a bit odd that I could watch Clueless on a continuous loop and not complain. There's just something about this film that is pure fun. Whether it's the acting or the writing, the music or the pretty people, this movie could possibly be what one would consider a perfect film. I'm not saying that it will be studied at AFI or immortalized in The Criterion Collection, but the film does just about everything right in its quest to entertain.

Based somewhat upon Jane Austen's Emma, Clueless focuses on Cher (Alicia Silverstone), a rich California girl with little more to worry about than the way she looks each day. Clothes are her life, and the life of her best buddy Dionne (Stacey Dash). When they aren't thinking about clothes, they are shopping for clothes or talking about clothes or wearing clothes. They live in a hyper-realistic world of cliques and fashionistas who live to look good.

Dropped into their world is Tai (Brittany Murphy), a slacker girl with a thick Jersey accent, thick Jersey eyebrows and a general lack of fashion sense, or more specifically, Seattle, circa 1995, fashion sense. Befriended by Cher mainly out of pity, Tai becomes her make-better project. Fixing her clothes, her concept of status and her attitude, Cher makes Tai into another Cher, which Cher learns is something the world didn't need. 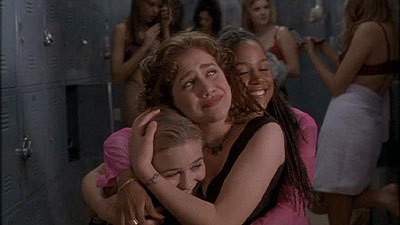 As a perfectionist, Cher lives something of a lonely life, as she could have any guy she wants, but none fit her criteria. That includes big man on campus, Elton (Jeremy Sisto), who she wants to set up with Tai. But Tai has her eyes set on skateboarder Travis (Breckin Meyer), and the guy Cher has her eyes on, Christian (Justin Walker), isn't what he seems. The only guy she can find who's at all interesting to her is the guy she hates, her stepbrother Josh (Paul Rudd). So instead of finding happiness, she tries to set it up for others, includng a pair of teachers who are just perfect for each other, though not for anyone else. As movie law would dictate, those who meddle in others' affairs are bound to find it bite them back, and it does for Cher.

The plot may not be Shakespeare (though it does borrow a bit), but in a candy-coated, sunshine-bathed world, that's not important. What is important is fun and Amy Heckerling's script has loads of it, wrapped around smart, witty dialogue that's peppered with pop culture references. Putting those words into the mouths of such a talented group of actors, first and foremost the eminently likeable Silverstone, made this movie a success. Consider that what could be minor parts like the sidekick's boyfriend, played by "Scrubs"'s Donald Faison, are so memorable and the velcro-like way that the Clueless vernacular has gripped society, and one has to think that this movie is something special.

Truthfully, one could make a killer drinking game by picking out the dated refences (cell phones with extendable antennae, pagers, backwards baseball caps, etc...), but the ideas that changing others isn't a path to happiness and that being true to yourself is a good thing are timeless. After all, they made the trip from Austen's pen to Silverstone's mouth without much wear. Even though younger viewers may look at the clothes the way most people view leisure suits, that only enhances the fairy tale-like feel. Beverly Hills High School is a utopia and an escapist fantasy, one that's worth visiting every now and then. 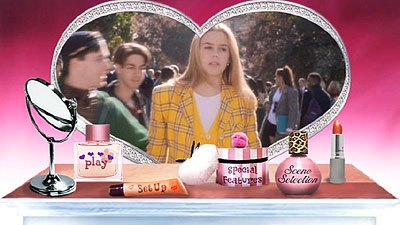 The DVD
The packaging has changed for this release, but it's still a one-disc edition. This time, the standard keepcase is wrapped in a sparkly holofoil slipcover that features a tighter-cropped and readjusted version of the original cover art. Surprisingly, Brittany Murphy doesn't get bigger placement, or even her name on the cover, despite the fact that her and Silverstone have changed places on the Hollywood food chain. Insert freaks will want to note though that the original had one, and this version does not.

The original DVD featured very boring static, though anamorphic widescreen menus. This time the anamorphic widescreen main menu is animated with tons of footage from the film. The offerings include play the film, set-up languages and subtitles, select scenes and view special features, just like the first time. Language options include English 5.1 and 2.0 tracks and a French 2.0 mix, and subtitles are available in English and Spanish (which wasn't here on the first release), while the scene selection menus have still previews and titles for each scene, as it was in the beginning (DVD.)

Some things haven't changed for the better, as instead of going directly for the menus, this new release has several unskippable commercials.

The Quality
To compare the two releases, I chose chapter seven, when Cher, Tai and Dionne hit the party in the Valley, due to the color and sound variation in the scene. The new disc's transfer is definitely improved, even if it is a bit softer looking. That actually works well, as the film is less harsh looking this time around, especially in terms of the vibrant color. Reds don't bleed the way they did before and the image is much brighter overall. Grain is now almost unnoticeable, and the dirt and damage seen in the first transfer are cleaned up as well. Because of the brighter image, and despite the softness, the level of detail has been bumped up. Skintones are nicely reproduced as well.

The sound doesn't seem to have changed much from the first disc, but that's not all bad. The surrounds have background noise and music when it makes sense to the scene, and the overall mix is solid, with clear dialogue and good sound effects. This is a romantic teen comedy, not an action blockbuster, and the mix is appropriate, though the great music in the film could be a bit more powerful. In fact, some scenes in the new mix seem a bit lower in volume, like the group photo scene in chapter six. Unless you sit and compare the discs though, you'll probably not notice it.

The Extras
The first disc was essentially barebones, with just two trailers making up all of the extras. The two trailers make a return appearance here, one a teaser trailer and the other theatrical. For a movie that's over 10 yeas old, these trailers look pretty nice, though they are still in full-frame format. There's some dirt evident, and they look tremendously different from the film in terms of quality, but it's worth nothing that the two trailers don't even match each other in terms of quality.

Now, you can't call yourself the "Whatever!" edition without some additions in terms of bonuses. The additions come in the form of seven new featurettes related to the movie. First up is "The Class of '95," which looks at the casting of the film and actually has some interesting information. Several members of the crew, including Heckerling and Director of Photography Bill Pope (The Matrix"), provide new interviews, along with actors Murphy, Dash, Faison, Rudd, Meyer, Walker, Wallace Shawn and Dan Hedaya, which are combined with film clips, old on-set footage and interviews. That they got this much of the cast together is impressive, but not having Silverstone is a disappointment. Fortunately, the 18:30 featurette is in-depth enough to compensate for her absence.

"Creative Writing" (9:38) brings back Heckerling, Pope and associate producer Twink Caplan to talk about the genesis of the movie, from the writing of the script to its time in development hell to the production. The stories told in here about what it took to bring this film to the screen are a perfect example of why Hollywood has such a hard time making good movies. Pope's memories of the film are particularly interesting.

Costume Designer Mona May, in new and '95 interviews, gets the spotlight in "Fashion 101," which examines the clothes and styles that made the film's look so unique. Elisa Donovan (Amber), make-up artist Alan Friedman, Murphy, Dash, Walker and Heckerling provide testimonials about the clothes, while May explains her choices for the film. At 10:45, this is another fine look back.

The "Language Arts" featurette spends eight minutes with Murphy, Faison, Meyer, Donovan and Walker to find out more about the slang used in the movie, which was a huge part of the movie. Most of the audience (and plenty of the cast) heard these phrases for the first time in this film, making it a cultural trend-setter, and now most of them are in the popular lexicon. The featurette uses graphics to define many of the terms, and has a sense of humor about the whole thing.

I had expected "Suck 'N Blow: A Tutorial" to be the worst featurette, as it focused on such a minor and meaningless part of the film. I was mostly right. Utilizing mostly on-set footage and old interviews with some of the cast, it illustrates the difficulties involved in making the scene happen. At 2:48, it's the shortest featurette, which is a good thing, as it barely can make it to that point without losing momentum.

"Driver's Ed" brings the disc back on track, as Heckerling, Pope, Faison and Dash talk about how the freeway driving scene was shot. It's the biggest action scene in the movie, and the featurette uses raw footage and interviews to show how it all came together in just 3:48. The disc feels like its winding up now, and "We're History" wraps things up with the thoughts of most of the participants in these featurettes. Among the topics covered are the first time the actors watched the movie, the cast's feelings about Heckerling and what the movie means to them. It's a fluffy nine minutes, but a proper cap on the package.

There's also six previews included on a reel. Whatever. 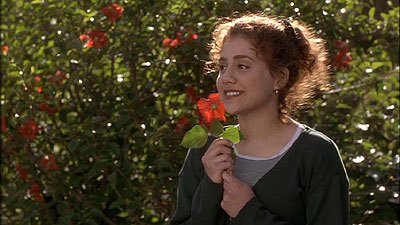 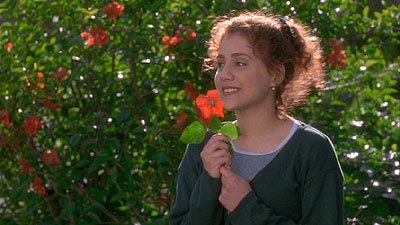 The Bottom Line
Based on premise alone, Clueless really should be a guilty pleasure watched on cable at one in the morning. Instead, thanks to a great cast, a quality director, a smart script, a great soundtrack and a true star turn from Silverstone, it ended up as a teen classic. Though a bit dated now thanks to the focus on the ridiculous nature of '90s teen culture, the universal story at Clueless' core makes for a timeless, fun flick. Paramount has now replaced their previous barebones DVD with an appropriate special edition that does the film, and its many fans, justice. If you count yourself among that group, you can make the upgrade without fear, and those of you who have been holding out can finally make your purchase proudly.