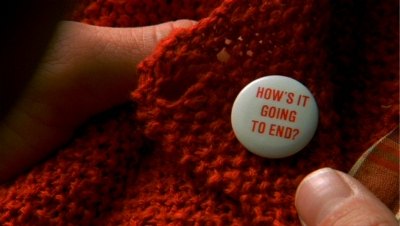 As memorable now as it was upon its theatrical release, Peter Weir's The Truman Show (1998) took one ordinary life and made it something special. It was the first major dramatic role for Jim Carrey---then mostly known for his rubber-faced antics in Dumb and Dumber, The Mask and Ace Ventura: Pet Detective---but audiences didn't really seem to mind. The Truman Show enjoyed a successful $125M run at the domestic box office, critical acclaim, 3 Oscar nominations and a nice pile of awards, so it's safe to say that a lot of people liked it. The film hasn't aged a bit over the last 7 years, and it doesn't look like it'll start anytime soon. An intriguing premise makes it accessible, but the thought-provoking themes lurking underneath make it fun to get lost in; much like another personal favorite, Groundhog Day, it's a simple premise executed to absolute perfection.

The literal take on "reality TV" proved to be prophetic, yet The Truman Show only hints at the raw voyeurism that modern television is headed towards. We're introduced to Truman (Carrey), an affable insurance guy who just happens to be the star of the world's most popular TV show. Now in it's 30th year, The Truman Show is just that: it's broadcast 24 hours a day year-round, using more than 5,000 cameras inside a massive dome-shaped set that doubles as Truman's picturesque town of Seahaven. Everybody's in on it, including thousands of paid extras, his "TV wife" Meryl (played by Hannah Gill, in turn played by Laura Linney) and even his best friend Marlon (Noah Emmerich). Their job is to just act natural, to keep him in the dark while casually name-dropping the latest product placement. Truman has been on camera since birth, but he's remained oblivious...up until a strange series of events, that is.

His fear of water (brought upon by the drowning death of his "TV dad") has prevented him from leaving the island-like community, but the burned-in memory of a beautiful woman (Natascha McElhone) prompts him to pull up his roots. Soon, everyone's trying their best to keep Truman in Seahaven: the extras, the wife, the best friend, and especially Christof (Ed Harris), the television producer who created Truman's artificial world. Truman may even have to sacrifice his life for total freedom, but he's willing to risk everything for a taste of the real world.

Naturally, the viewers are glued to the television, and so are we. 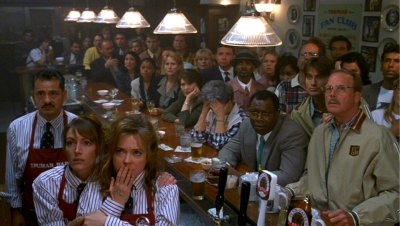 As if the cover artwork and title weren't enough proof, this is Carrey's show from start to finish. Even so, a number of excellent supporting performances really stand out, including Laura Linney, Noah Emmerich and Ed Harris (as Cristof). The first two do a fantastic job of playing believable "characters within characters", but it's Harris who really does the best balancing act; as Truman's mother, father, God and Satan, he's the most complex character in a world of people doing their best to simply look normal. It was also nice to see a few familiar faces pop up here and there, including Peter Krause (Six Feet Under), Paul Giamatti (American Splendor) and composer Philip Glass (who provided music for the film as well). As an aside---or ham-handed segue, if you prefer---the film's additional music also deserves special mention: from Mozart to Burkhard von Dallwitz, every note fits like a glove.

Still, it's the deceptively simple story that keeps me coming back to The Truman Show. The original concept by writer/producer Andrew Niccol (Gattaca, S1m0ne) favored a darker sci-fi atmosphere over the sterile streets of Seahaven, but director Peter Weir opted for the lighter side of things. The "dream world" provided by Christof is seemingly a win-win situation: Truman gets to live a life virtually free of fear, while viewing audiences worldwide can tune in for comfort and familiarity...so why do we know it's wrong? As seen in films like The Great Escape and THX-1138, people always find a way out. History offers proof that boundaries, like rules, were made to be broken. 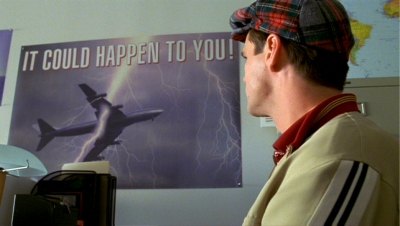 As one of my favorite films of 1998---topped only by Wes Anderson's Rushmore, for those keeping score at home---The Truman Show is a perfect example of modern films showing that there's still plenty of great ideas to be unearthed. It's not often that every part of a film seems to fit together so naturally, but this one should have no problem standing the test of time. The simple and complex layers scattered throughout ensure that The Truman Show is a film worth watching again and again, with each viewing more detailed than the last. My only complaint is that the film could've been a little longer, but you know what they say: if something's great and short, it's even better.

Originally presented in 1999-era bare bones DVD fashion, The Truman Show has deserved the Special Edition treatment for years. Paramount offers a single-disc upgrade that's packed with goodies, including a brand-new anamorphic transfer and a decent assortment of interesting bonus features. It's not quite the fully-loaded extravaganza that we've become accustomed to, but it's strangely fitting for the film itself: simple, entertaining, and to the point. Below, you'll find a comparison review between the original 1999 release and this new Special Edition...so let's get moving, shall we?

Don't you love it when great films get great visual treatments? The 1.85:1 widescreen transfer for The Truman Show has been anamorphically enhanced for this new Special Edition, and the difference in quality is noticeable. The original release wasn't bad, but this new transfer really showcases the film's squeaky-clean cinematography: colors pop, the image is well defined and black levels are solid. The only red flag is a bit of cropping near the top of the image (see the screen comparisons), but it doesn't seem to cause any major problems. Overall, Paramount has done an excellent job; for those with decent setups, the visual improvements alone should be reason enough to upgrade.

Presented in Dolby Digital 5.1 or 2.0 Surround, The Truman Show's audio remains the same as the first release…but that's certainly not a bad thing. While the film is mainly dialogue-driven, there's a decent amount of ambience and LFE that really adds to the atmosphere during several scenes (especially those with bad weather). Dialogue is clean and clear, but it's also balanced nicely so you won't have to reach for your remote every five minutes. A full-blown DTS track might've been an interesting addition, but this 5.1 mix is no slouch. English, Spanish and French subtitles have been provided for the deaf, hard of hearing and English impaired. 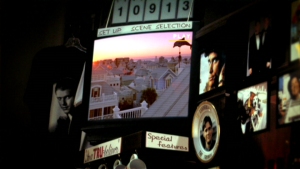 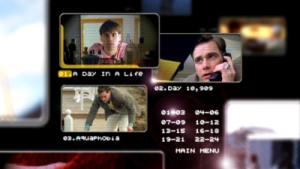 I actually preferred the original menu design (seen here) over the new one (above), but they're still attractive and easy to navigate. This 103-minute film is still divided into 24 chapters, while no apparent layer switch was detected during playback. The cover art looks especially nice: I liked the original, but the Special Edition's photo-mosaic design is a bit more eye-catching and appropriate. The actual packaging was not on hand at the time of this review, so I'm not certain if any inserts have been included with this release (though judging by Paramount's history, probably not).

The original bare-bones release included nothing more than the film's Theatrical Trailer and a TV Spot (presented in fullscreen and non-anamorphic widescreen, respectively), but they've returned in the same fashion for this Special Edition. A number of new bonus features also make their television debut here: while they might not be as plentiful as we spoiled consumers have been hoping for, they're clear, concise, and extremely interesting. Let's take it from the top, shall we?

First up is an excellent two-part Behind the Scenes Documentary entitled "How's It Going To End?" (43 minutes total, below left), which covers a bit more than your average pat-on-the-back featurette. The majority of the cast and crew are on hand for this documentary---even Carrey, though his interview footage appears to have been shot a few years back----and everyone does a fantastic job of sharing the highs, lows and in-betweens during the film's original production. Director Peter Weir is also in good spirits here, covering everything from the film's unusual location shooting to the original story by Andrew Niccol. As an added bonus, this documentary---and the rest of the extras, save for the trailer and TV spot---has been presented in anamorphic widescreen with optional English, French, or Spanish subtitles when applicable. This was a wise move by Paramount, so here's hoping that more studios follow the lead of those who value consistent DVD presentation. 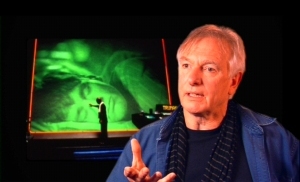 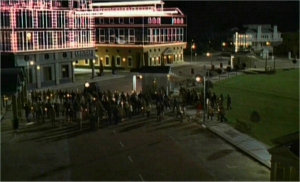 Next up is a short Visual Effects Featurette entitled "Faux Finishing" (14 minutes, above right) that covers the film's tasteful and clever use of CGI---many viewers will be surprised to find out what was real and what was just an illusion. There's also a selection of four rough Deleted & Extended Scenes ("Product Placement", "Truman Suspicious", "The Future Cast Meeting" and "Truman Missing", 13 minutes total); these don't add much to the story but they're still interesting enough. Winding down the bonus features is a non-captioned Photo Gallery and the aforementioned promo material.

While it would've been nice to hear a commentary track as well, it's no surprise that one wasn't included; after all, past films by Peter Weir on DVD---including Master and Commander and the recent Witness Special Edition---didn't have commentaries either. In any case, fans are still treated to a satisfying mix of extras that really adds to the film's charm and staying power.

It's taken a few years to reach us, but The Truman Show has finally been given a release that does the film justice. While the audio never needed much improvement, this new Special Edition does everything it should have: improving upon the first transfer while adding a handful of fascinating bonus features. The film itself was one of the best of 1998---and even stands tall with the best of the decade, in this reviewer's opinion---so it's no surprise that this modestly priced upgrade is worth every penny. Those who own the first disc should have no problem picking this up again, while those new to The Truman Show should consider it an essential blind buy. Highly Recommended.

Randy Miller III is an art instructor hailing from Harrisburg, PA. To fund his DVD viewing habits, he also works on freelance graphic design and illustration projects. In his free time, Randy enjoys slacking off, general debauchery and writing things in third person.