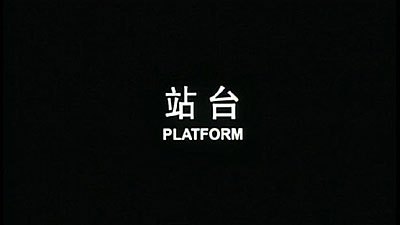 
The Movie
Every person with their own independent thought pattern has a moment (or multiple moments) where they feel completely out of touch with society. For me, it's this movie, and society would be film critics. Before catching this film, I had seen numerous glowing reviews that hailed it as a superb film. Les Cahiers du Cinéma even selected it as one of the 10 best films of 2001, a year that saw Shrek, Amélie, Donnie Darko, Moulin Rouge! and A Beautiful Mind hit theaters. But in watching it, I could only describe it one way: dull.

The story follows four young friends, two guy who date two girls, who are members of an art troupe, at the end of the 70s in China. They are paid employees of the state, and perform propaganda that espouses the opinions of and honors the government of Mao Zhedong. When Deng Xiaoping takes over and opens the formerly closed country to outside influences, the group finds it has to entertain its crowds instead of lecture them, if it expects to make any money.

Going from Chairman Mao's Good Time Party Boys to the All-Star Rock 'n Breakdance Electronic Band is a bit of an extreme move, but as China changes, the group has to keep pace, frequently altering their look and sound to try to find something that fits them and fits their audience. The group is a stand-in for the people of China, and the difficult cultural changes that the '80s brought. The guys and girls in the group deal with the changes themselves as well, coping with love and desire and the scary new world they face, one that still walks a line between freedom and expectations. 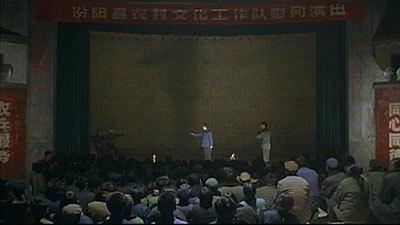 This could have all been pretty interesting, but the film, which clocks in at 150 minutes (45 minutes shorter than the original gigunda edit of the movie), seems determined to serve as a microcosm for the Cultural Revolution, forcing the feelings of boredom and unrest felt by the characters onto the audience. This is like the simulation from hell, as in most scenes nothing happens, as people sit around and live their boring lives.

A lot of the sense of ennui is a result of how writer/director Jia Zhang-Ke shot the film. He's got an artist's eye for composing a shot inside a frame, but that skill would serve him better as a painter or photographer. Here it results in a series of pretty pictures that combine to have no visual momentum or energy. There are several long, slow pans revealing almost nothing, that look as if they were panning-and-scanning widescreen into full-frame. One pan almost becomes adventurous, as it follows the pan with a dolly into a room, but again, it shows nothing in the end. It's almost as if the director got bored as well, and decided to finally move the camera.

Cameras held still and far from the characters keep the audience from connecting with those suffering in the story, giving it all a documentary feel. Anyone who has accused Kevin Smith of putting the tripod down and shooting should take a look at this film if they want to see what that technique looks like. If there was less movement in this movie, it might qualify as stop-action animation. Very slow stop-motion. Add in a main character that walks around like a depressed Rivers Cuomo on downers, and you've got a nice solution to insomnia. 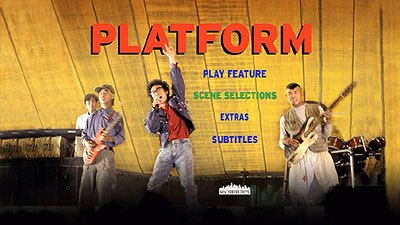 The DVD
New Yorker Video is releasing Platform on one DVD, which comes packaged in a standard keepcase with an insert (see The Extras). From the static, anamorphic widescreen main menu, viewers can select to watch the film, select scenes, view extras or adjust the subtitles. There's also a promo section for New Yorker Video, which has a trailer for Jia's next film, Unknown Pleasures. The film has no audio options and subtitles are only available in English, while the scene selection menu has a still preview and title for each chapter.

The Quality
The anamorphic widescreen video on this DVD is soft and hazy without much definition. Though the colors are decent, they are muted by the gauzy look of the transfer and the lack of detail. Somehow though, there's not much grain in the transfer, and only the slightest bit of dirt. Looking at the smudgy images, which actually improve slightly as the film progresses, it's almost as if the film was painted with watercolors.

The audio is a decent, but not overwhelming Dolby Digital 2.0 track, that at times sounds like your ears have some cotton in them. Dialogue is moderately clear, and there's a nice use of background sound and sound effects, a big part of the film's sound design, but it's entirely center focused, without anything in terms of a dynamic mix.

The Extras
As is usually the case with DVDs from New Yorker Video, there's a nice insert, though this time it's a bigger 8-panel pamphlet that's rather loaded. Included on these pages is a short interview with Jia, a discussion of the two cuts of Platform, parts of a review of the film by CineAction's Shelly Kraicer, a timeline of Chinese politics and culture, Internet sites with more information related to the film, recommended books and scene selections. This one wouldn't be out of place among the Criterion inserts with the amount of info that's included.

A subtitled French video interview with Jia allows him to explain his motivation for making the film, his love of breakdancing and his feelings about pirated DVDs. The MPAA isn't likely to embrace him any time soon. A calm, relaxed man, Jia smokes his cigarettes as he talks about his life and his experiences in film. Anyone looking for more info about Platform should find this to be of interest.

More of Jia can be seen in the nearly 22 minutes of behind-the-scenes footage included. The director works with his crew to film a crowd scene and musical performance, all in an effort that seems a bit haphazard. There's no subtitles unfortunately, so you can't tell what's going on. The same can be said for the trailer, which is also sans subtitles. Even though you can't understand the dialogue, it's obvious that this is nothing like an American trailer.

A manual slideshow with 25 pictures finishes things up. 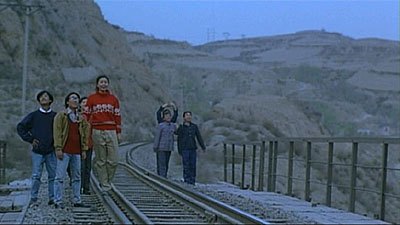 The Bottom Line
This is a film for those with a tremendous amount of patience. If you enjoyed Gerry or perhaps Barry Lyndon, you could sit down and enjoy this lengthy meditation on cultural change. The rest of society will find it a chore to sit through this deliberately-paced movie. I don't consider myself a "blow-em-up" movie fan (I count The Ruling Class among my most intriguing films), but this was hard to get through. That may just be the point though, as the lives seen in this film must have been tough to get through as well. But i don't think that's a reason to punish the audience. The DVD has an OK presentation, but it could look a lot better, and the DVD extras aren't going to set the world on fire. If you're a fan of foreign films and are curious about Chinese history, give it a rent, but keep your hopes low. Otherwise, skip it.