Studio Ghibli has often been called the Disney of Japan, and it is a very accurate description.  Like the Disney studio of old, they produce high quality animated feature films that are entertaining for both children and adults.  So it is very fitting that Disney has licensed the Ghibli films for American distribution.  The latest wave of releases includes a movie that has a different look and feel from most of the other Ghibli films but is still eminently entertaining:  My Neighbors, the Yamadas. 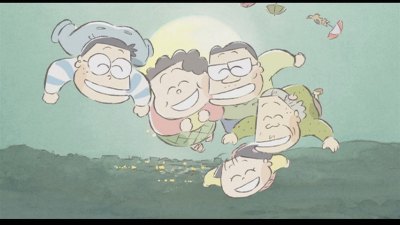 This film is a series of small vignettes involving the Yamadas; typical Japanese family living in the suburbs of Tokyo.  The father, Takashi, is a hard working salaryman.  The mother stays at home and takes care of the house along with the grandmother.  There are also two children Nonoko and Noboru.

Each of these short skits, reminiscent of a gag-a-day comic strip, are really funny because they his so close to home.  Who couldn't sympathize with Takashi when he gets nervous before giving a speech at a wedding?  And who could resist laughing when he glances down at the notes for his speech only to see  "Cucumbers, carrots, half a pound of beef."  Already in front of the mic, he has nothing to do but to forge on as best as he can. 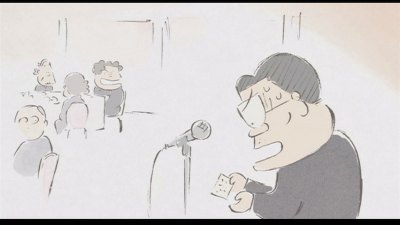 There were a lot of scenes I could really relate to.  The time the son gets his first phone call from a girl brought back memories of my teenage years, and the father's fantasies of being a masked crime fighter also had me laughing loudly.  I also loved the scene where the Takashi and his son go out to play baseball, only to start arguing over who is the starting pitcher and who is the relief, and which type of pitch to throw.  The ending of that bit is truly classic. 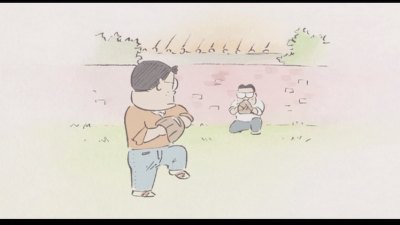 The scenes range from the amusing to the out and out hilarious.  The only caveat, is that the humor is very dry, and some people may not like it since the jokes are sometimes subtle and not in your face.  But if you give it a chance, this movie quickly becomes endearing and very humorous.

When you pop this disc in, the first thing you notice about this movie is that it doesn't have the usual look of a Studio Ghibli film.  Instead of the colorful and detailed scenes that the studio is known for, this film has sparse backgrounds and looks like a series of watercolors more than traditional animation.  Based on a comic, director Isao Takahata (Grave of the Fireflies) wanted the film of have the look of a newspaper strip and he succeeded wonderfully.

The audio for both languages was crisp and clean, with a very good range.  The surround channels were used sparingly, but to good effect.  There were no dropouts, distortion, or other audio defects.  A very nice sounding disc.

The anamorphic widescreen image (1.85:1) is just excellent.  The image is very sharp, and the pastel colors are reproduced beautifully.  Digital defects are nonexistant, with no aliasing or blocking present at all.  I can usually find something to complain about, but this transfer looks flawless. 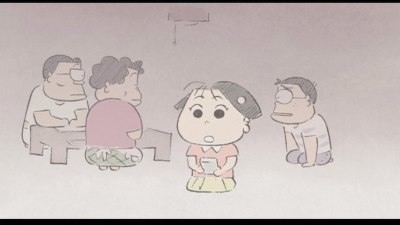 This disc also features a 16 minute reel of trailers for the film and a comprehensive set of storyboards.  There is also a 5½-minute behind-the-scenes featurette that has interviews with the four English voice actors who played the Yamadas.  This was short but fun.

Though this doesn't look and feel like a Studio Ghibli film, My Neighbors, the Yamadas is a wonderful entry in their canon.  This film has a lot of charm and gentle humor that will have both young and old laughing out loud.  An immensely enjoyable film, this disc is Highly Recommended.