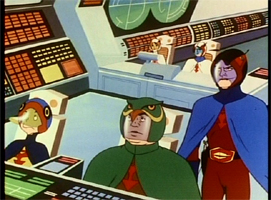 As far as classic anime shows go, it doesn't get much more old school than Gatchaman. Having originally aired in 1972 over in Japan, the show saw some scattered releases here in America but was severely edited content and length wise. Up until now the original Japanese track for the show hadn't been heard here and thanks to A.D.V. we get that, the uncut show and all 105 episodes.

The whole premise behind Gatchaman is that in the future the sinister group Galactor rises up to try and take over the world. It's up to Dr. Nambu and his team of five Science Ninjas to stop their diabolical scheme by whatever means necessary. The team consists of Ken the Eagle, Joe the Condor, Jun the Swan, Ryu the Owl and Jinpei the Swallow. While there is some continuity between episodes, you don't have to catch all 105 to know what's going on in the show.

The second wave of Gatchaman has come along and the third volume of the series features another great collection of episodes. The ninja science team tackles Galactor yet again and this time they face even more giant monsters. The roster here includes a giant antlion that moves lakes, a icy beast known as the Ice-Kandar, a mutated jellyfish, the indestructible Mechanica, a big insect and a really mean whale. Yes, Gatchaman never really seems to just take on an evil organization's henchmen; that's simply not enough. They have to face a big bad city destroying beasty in just about every episode. 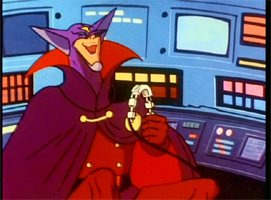 Unlike other anime that feature three or four episodes per disc, Gatchaman packs in a whopping six 25 minute episodes. Volume three houses numbers 13-18 which are: The Mysterious Red Sand , The Fearsome Ice-Kandar , The Fearsome Jellyfish Lens, The Indestructible Machine, Mechanika, The Grand Insect Operation and Revenge! The Whale Operation.

The time period's fear about pollution and nuclear energy continues and several of these episodes use those as their theme. Keeping up the trend of the prior volumes is a relative lack of continuity from episode to episode, although a couple of themes seem reoccurring. From his appearance in the last volume Red Impulse makes a couple of visits to the science ninja team and Jinpei always seems to wind up getting into trouble. Even though they hate to do it and only use it as a last resort, the team seems to use the firebird technique an awful lot and no matter how hard they try, they can never seem to catch the lead bad guy. 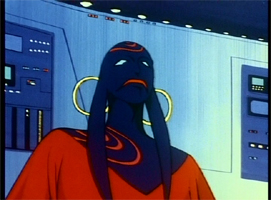 Do you question just how uncut these DVD releases are from what we've seen in America before? Or maybe you wonder how sinister Galactor can be if the henchmen all wear bellbottoms and take orders from a guy dressed in purple with pointy ears and lipstick. In the episode The Fearful Ice-Kandar we see an agent of Galactor bitch slap a little girl and kick a guy in a wheel chair. Granted today's society is a little more tolerant of that kind of material, but considering this was originally made 30 years ago you can see why some of it would have been edited before.

Gatchaman may not be for anyone, but if you have an open mind and are curious where many shows got their inspiration from this one will entertain you. It's a classic right up there with Ultraman and Star Blazers so that alone should tell you what kind of quality you can look for. If you're like me then this show came out before you were born and maybe you recall snippets of it from your childhood in the form of Battle of the Planets or G-Force. Reminiscing aside, this show is truly timeless and something you should definitely check out if you are open to history.

Quite honestly, this is about as good as Gatchaman has ever looked considering the age of the show and quality of animations for the time period. It is presented with its original 1.33:1 full frame aspect ratio and any faults in image quality are attributed to the source material. Seeing as the show was produced in the early 70s you can expect to see a lot of grain, choppy animations, disproportionate images, lighting issues and occasional shaky image. But I suppose one could argue that just adds to the classic air around the show.

Who knows how this series was stored, but given the fact that it is older than I am I have to say that I'm really impressed with the transfer. Many of the colors are solid throughout, though there are a few moments where the quality drops off significantly and becomes muddy. In the end I have to give a pat on the back to A.D.V. for restoring this classic and doing such a wonderful job of it.

Gatchaman Volume 3 includes a new English dubbing and the original Japanese audio tracks. These are presented with a 2.0 mix and depending what you are looking for they each provide different quality. The English features louder and cleaner sound but also some extremely horrible voice acting at times. A lot of the dialogue from the 70s is included here so expect to hear stuff like "groovy" and "can you dig it?".

The original Japanese features a softer sound transfer but is the most faithful to the material. I found myself enjoying the Japanese mix more, though sometimes I bounced back and forth to see what some of the differences were. Again, the overall quality for the original is decent considering the fact that it's over thirty years old.

Aside from some A.D.V. previews, the third volume of Gatchaman also features some extras worth mentioning. A creative addition that I haven't seen before is called Gatchaman Karaoke which plays The Fearsome Jellyfish Lens episode with music and sound effects, but no voiceovers. Instead subtitles appear on the bottom so you and a group of friends can be the voice actors. Sure it's pointless, but it's kind of funny and a unique inclusion that I rather enjoyed. These are apparently going to be included with every volume that is released (at least that's the going trend right now).

The industry standard clean close animation is included as well as a solo commentary for The Indestructible Machine, Mechanika. The commentary has director Charles Campbell and voice actor for Jinpei, Luci Christian. I thought this was one of the more upbeat and funny commentaries to date for the series, but it's not extremely informative. It's worth a watch for a couple of laughs though and is a welcome addition to the disc. 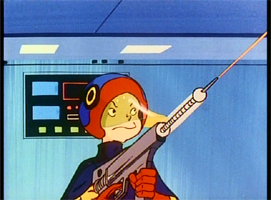 By today's anime standards, Gatchaman is a dinosaur but for it's time it was very advanced. Much of what you see in shows today found their inspiration in series like this and despite the fact that it seems cheesy when you go back to watch it, the nostalgic value is extremely high. If you enjoyed Battle of the Planets or G-Force when they came out in the States, you owe it to yourself to see the uncut version of the show.

Many of the fight scenes that were considered too violent and controversial for the time period have been added back in, not to mention we're going to see all 105 episodes. The original Japanese is a treat and the English track is competent enough, although it can be very corny at times. Sure it may not be for everyone, but older anime fans will definitely dig it.