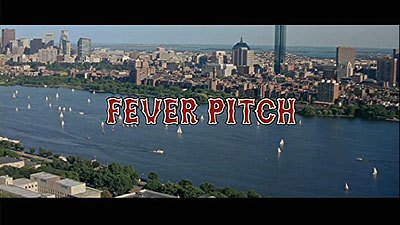 
The Movie
Nick Hornby writes books that make for great movies, like High Fidelity and About a Boy. While About stuck close to the source, High Fidelity transplanted the story across the pond to America, and by maintaining the theme of the book, it still worked. So when it came time to adapt Fever Pitch, Hornby's novel about obsession with soccer, the challenge was to find a way to recreate the overwhelming passion of English footy fans in an American film.

There are few teams in America that can engender such passion, and even when you find a few, like the New York Yankees or Dallas Cowboys, it becomes hard to give their fans anything approaching humility or pathos. The teams have had too much success. But when one considers the ever-suffering fans of the Boston Red Sox, the right choice is obvious. That Jimmy Fallon has experience playing just such a creature just makes the whole thing kismet.

Fallon plays Ben, a Boston teacher who spends his summers obsessing over his favorite team, living his life dictated by the dates and times on the season tickets he inherited from his uncle. When he meets Lindsey (Drew Barrymore), a brainy analyst, he finds the Sox have competition for his heart. But being a lifelong Boston fan, he knows that losing is a self-fullfiling prophecy, and he does everything he can, subconsciously, to drive Lindsey away. 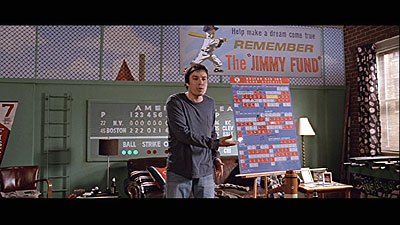 Lindsey loves Ben though, and is willing to deal with the quirks and scheduling, until her doubts become too big to ignore. Only when faced with a personal loss on par with the ball between Bill Buckner's legs in 1986, can he think about something other than baseball. Surprisingly, considering this is a Farrelly Brothers film, that other thing is not bodily fluids. Instead the twisted minds behind Kingpin and Dumb and Dumber put Fallon at the center of a sweet story with real heart. In fact, the only way one would know this is a Farrelly Brothers' film is the New England bent and a scene involving vomiting and a dog (and even that's not as bad as it once might have been.)

Though this is a very entertaining film, there are some problems. Due to the amount of months that pass from the beginning of the film to the end, title cards are used to show the progress of time. This gets annoying very fast and often wrecks the film's flow. As the film's plot doesn't progress cleanly, jumping around from time frame to time frame, these title cards give the film a faux episodic feel that doesn't lend itself to the story. A subtitle is one thing, but this is ridiculous.

Though it's not as guilty of the constant reality bending that romantic comedies are known for, the film takes one turn that's directly into the suspension-of-disbelief land of no return. I won't ruin the moment, which is extremely painful emotionally, but if anyone can believe the way the film progresses from there, it's only because one is an incurable romantic. Because otherwise, it just makes zero sense. But on the other hand, the way the story ended in real life didn't make much sense either. 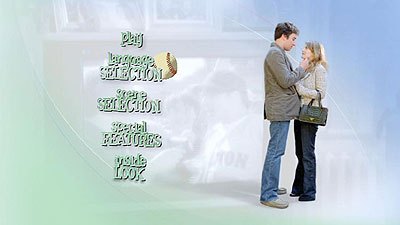 The DVD
Fever Pitch is a one-disc release, packed in a standard keepcase. The disc features an animated, anamorphic widescreen main menu with options to play the film, select languages or scenes, or view the special features. An animated transition moves you between the menus. The scene selection menus have still previews and titles for each chapter, while the language options include English Dolby Digital 5.1, French and Spanish Dolby Surround tracks and English and Spanish subtitles. The film is also closed captioned.

This is one of three versions of this movie available on DVD. A full-frame edition and a "Curse Reversed Edition" made for Red Sox fans, with an extended ending, are also available. They were not made available to us to review (most likely because I'm a Yankees fan.)

The Quality
The anamorphic widescreen video is very wide, looking like a 2.35:1 aspect ratio. Color is very nice, as it's bright, but not too bright, skintones are very natural and the level of detail is excellent. There doesn't seem to be any dirt, damage or excess grain. This is a quality presentation.

The audio mix for the 5.1 Dolby Digital soundtrack is equally good, with good bits of emphasis in the music and slight sound effects. For a romantic comedy, it's a rather active sound field, though not with the kind of dynamic panning or directionality seen in action films. Like Goldilock's porridge, the audio is just right.

The Extras
The Farrelly Brothers provide another of their trademark home-spun audio commentaries for the film, sharing plenty of anecdotes about the cast and crew, especially those you wouldn't know. For some reason, the guys love to talk about the extras and smaller parts. More than most Hollywood types, the Farrellys make a commentary into a watching-the-film-with-the-creators experience. There's also some insight into the filmmaking process, which is a welcome aspect.

13 deleted scenes are included in workprint quality, and can be viewed individually or in a large group. The early scenes with the young Ben are cute, but the beginning chosen for the final film is much better. Also, one of the funnier moments in the trailer didn't make it into the film, but is included here.

The gag reel includes almost six minutes of outtakes, and plenty of crack-ups between Barrymore and Fallon. They are so goofy together that they can't help but make each other laugh, and in turn it's pretty funny for the viewer.

A pair of featurettes that were (and as of this writing, still are) available on the film's Web site, are up next. One "Love Triangle" is a two-minute EPK-style piece promoting the film, but the other, "Break the Curse" is a bit cooler, as it talks about what it was like to make a fictional film about an event as it was really happening. That one is almost three minutes long.

Another featurette from the Fox Movie Channel, "Making the Scene: Fever Pitch" covers the same ground as "Break the Curse" and "Love Triangle," just in a bit more detail, for just over eight minutes of video.

The special features wrap up with the movie's theatrical trailer, a promotional Fox section for other Barrymore and Farrelly films, and a final extra, "Inside Look." This is a promotional piece for "In Her Shoes," an upcoming Cameron Diaz film. It's purely advertising fluff. 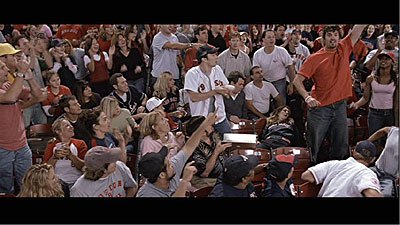 The Bottom Line
This is a fun, unapologetically romatic film, with two adorable leads, and a big change in tone from the usual Farrelly Brothers gross-outs. The audio and video quality of the film is solid, and the DVD puts together a decent collection of supplements to go with it. The audience for this movie is about as wide as any film, and as long as one doesn't think too hard about the plot, a good time should be had by all. Even Yankees fans.