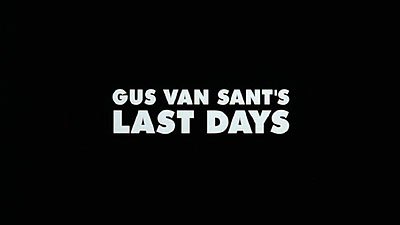 
The Movie
I am not a scholar on the topic of Kurt Cobain, so I won't attempt to draw the parallels between the grunge god Blake in Gus Van Sant's Last Days and the late lead singer of Nirvana. The inspiration should be obvious, and no one denies that connection. But after watching the film, I think it might be better to know less about Cobain, as it would probably help to have an open mind when seeing a cross-dressing rock star brandishing a rifle.

The film starts as an exercise in patience, as nearly 18 minutes pass before anything "happens." The plot is put into motion by what is seen in these early moments, which are presented in long, meandering shots, but there's nothing really going on. Instead, it's establishing an atmosphere, one of loneliness and isolation. The film is informed with such a sense of ennui that the characters seem like they are struggling just to exist and time can't be bothered to follow a linear path, moving to where it needs to go when it wants.

It's not just the length and content of the takes that seem designed to put the viewer in Blake's mindset. Many of the shots in this film, especially the outdoor views, are composed in a way that seems focused on making Blake small in comparison to the world around him. Combine this sense of being inconsequential with the isolation, and Van Sant has done a good job of capturing a character in a desperate age. One scene, in which Blake works on a song (or just jams, perhaps) traps him in a metaphorical fishbowl, and then slowly backs away to observe. It's certainly a set of pictures worth a thousand words. 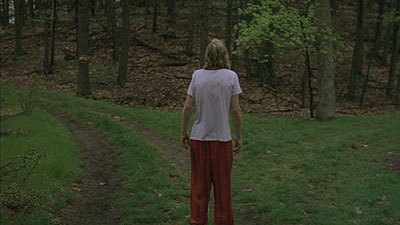 As Blake, Michael Pitt (Murder by Number) does a fine job as a symbol, becoming a mumbling, stumbling cipher for, as one character says, a rock cliche. A musician in real life, Pitt is capable of playing both the person and the performer, but the role limits him to something more like a parody than a reference. As he trudges through his estate and his life, Blake doesn't do much more than make macaroni and cheese, play his music and avoid people. The emptiness of his life is apparent, but it's not hard to be pitiful when you wander around and talk to yourself. People do it every day.

Van Sant seems to like the concept of challenging his audience and using the camera as a very passive observer. After Gerry, one would hope he would have gotten that out of his system, but he's come back for more here. When all is said and done, the film feels like it was exploring an idea, and found nothing there. Normally when that happens, nobody gets to see the footage, but when it's Gus Van Sant behind the camera and a Cobain stand-in in front, it gets distribution. 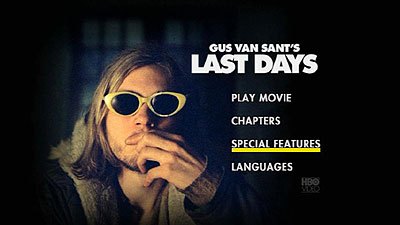 The DVD
Inside a standard keepcase with a one-sided insert that lists the chapter stops, there's a two-sided DVD. One side is in anamorphic widescreen, while the other is full-frame. The discs are otherwise the same, with a static menu presented in the respective aspect ration, that offers options to watch the film, select chapters, view special features or adjust the languages. The scene selection menus have still previews and titles for each scene, while language options include English 5.1 and 2.0 tracks, and French 2.0, along with English and Spanish subtitles. Closed captioning is also available.

The Quality
Interestingly, this is one of the rare occasions when a widescreen transfer is available, but it is not the original aspect ratio, as it was originally shown in 4:3. The film has a softness to it that seems intentional, as if to match the haze that envelopes Blake throughout the film. It's not blurry, it's just not as sharp as most films. Because of the softness, the level of detail isn't very high. There are no obvious issues with dirt or damage, and the color seems appropriate.

The 5.1 mix is strong, with some powerful moments during the music soundtrack. Audio is altered in this film, making Blake basically unintelligible, while the rest of the cast is fine. There's also a large amount of off-screen audio sources, and the mix does a good job of handling it all. It's not Star Wars, but it's the right sound for the job.

The Extras
Though there's a menu option on both sides, the special features can only be found on the full-frame side of the DVD.

"The Making of Gus Van Sant's Last Days" is, in some ways, very similar to the film itself. Essentially, the camera wanders through the production, without an agenda, and takes in everything that's going on. Interviews with the actors and crew flesh out Van Sant's techniques, and the general feel of the set. There's no structure to the 20 minutes of footage, which helps make it a more honest behind-the-scenes piece than most DVD featurettes.

Another behind the camera piece, "On the Set of Gus Van Sant's Last Days: The Long Dolly Shot" is an interesting, though methodical look behind the scenes of one of the film's signature moments, which involved a great deal of crew work, despite the shot's simple nature. I have many questions as to why it was done this way, but it's worth checking out, especially to see how Van Sant works.

An "exclusive" music video for the song "Happy Song" by Pitt's band Pagoda sees him vamp in his Cobain look for a generic rock video. The song is Nirvana-ish and not half-bad either. More Pitt music is up next in a deleted scene. "Deleted Scene 38X" doesn't seem like a deleted scene, but more like an alternate angle of a scene in the film. If it is indeed deleted, Van Sant has some mercy on his audience. "38X" is a good contender for Most Aurally Annoying Scene EVER, as it's filled with nine minutes of Blake messing with his instruments. The angle chosen for the film, if this is indeed the same scene, was a much better choice. 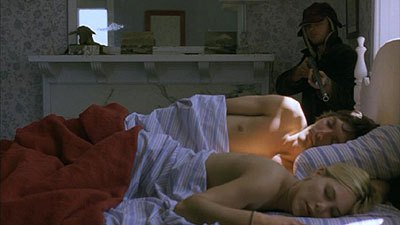 The Bottom Line
The New York Times called it "One of the year's indisputably great films," while the Village Voice said it's "Van Sant's masterpiece." While I find the concept endlessly fascinating, the end result reminds me of how I felt when, as a child, I would watch foreign films on TV and wonder what was so great about them. I'd like to think I could pick up a camera and make a movie about a guy avoiding people, but I don't have a My Own Private Idaho in me. That's probably my problem with this film, in that Van Sant should have been able to do more than what he did here with such a great idea.

The DVD presents the film in fine quality, with a few decent extras, but one viewing will be more than enough for anyone but the hardest of the hardcore Cobain, Van Sant or experimental-film fans.