Leni Riefenstahl is best known for impressive her directorial work, most notably the films Triumph des Willens (Triumph of the Will) (1935) a propaganda film about the 1934 Nazi Party rally in Nuremberg and Olympia (1938) which chronicled the 1938 Olympics in Berlin.  Before she ever stepped behind a camera though, Leni was a successful actress.

She first came to the public's attention while staring in a series of mountaineering films directed by Arnold Fanck.  Fanck held a doctorate degree in geology, and was an avid mountain climber.  He thought that the drama and danger of ascending peak would make the perfect setting for a film, and he was right.  He built a career around mountain epics.

Hannes (Sepp Rist) is in charge of reporting the weather from atop Mount Blanc.  He lives alone in a small cabin on the mountain, and his only link with civilization is his wireless set that he uses to send daily reports in Morse Code.

Hella Armstrong (Leni Riefenstahl) and her father who used to be a weatherman on Mount Blanc, climb up the mountain to visit the strapping young fellow.  They stay for a few days and Hannes shows Hella all over the mountain.  The two quickly fall in love, but dare not say anything to each other.

Back in town, Hella starts hanging out with a friend of Hannes, Walter (Mathias Wieman.)  Walter also falls for Hella, and writes to Hannes that he's planning on marrying the young girl.  This crushes poor Hannes and he volunteers to stay on the mountain for another season without relief.  But when his gloves blow away in the middle of a terrible storm Hannes fingers freeze, a deadly situation on the top of a mountain.  He is able to send an SOS, but will Hella be able to reach him in time?

This film is filled with wonderfully beautiful scenery.  The images of clouds pouring between mountain peaks like water and the snow covered fields are really lovely.  Unfortunately, that's about all this movie has going for it. 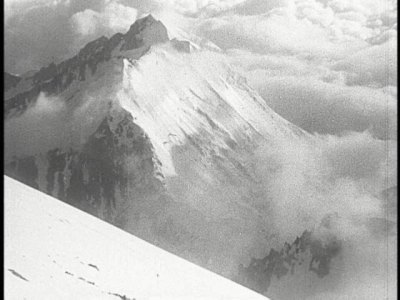 The plot revolves around your standard love triangle, but it's terribly uninteresting because you never get to know any of the characters.  They are all very one dimensional and time is never spent developing their personalities.  Hella comes across as being pretty stupid.  She never realizes that Walter is in love with her, nor does she tell him about her feelings for Hannes.  She cooks and cleans for Walter (for free) and spends most of her free time with him.  She sure was acting like she was interested in him.

The plot was really slow moving too.  Every scene of importance was separated by minutes and minutes of mountain scenes.  These were very picturesque, but they didn't move the plot along at all.  There was just too many scenes of people skiing that were thrown in for no good reason.  The film felt bloated and padded.


Though this was advertised as a sound movie, it is really a silent film with a few sound sections included.  Like The Jazz Singer, most of the film is silent, though there is a soundtrack accompanying the film that consists of music and sound effects.  It's nearly ten minutes into the film before anyone speaks, and then it's only a short exchange.  I wouldn't be surprised if this was planned as a silent film and sound was added at the last minute.

The lack of dialog isn't a flaw with the film though, it's the simple plot and glacial pace that makes this movie mainly of historic value.

The two channel German audio track is about what you'd expect from an early talkie.  The dynamic range is very narrow, there is some background noise, and the voices sound a little tinny.  Aside from this, the audio was adequate.

The full frame image wasn't stellar, but it looked fine for a film this old.  Just about every frame has some specks or scratches present, and there were a few missing frames.  Some sections were very soft, but generally the film was fairly sharp.  The contrast was fine, and the level of detail was very good through most of the movie.  For a 75 year old film this doesn't look bad at all.

Also included on this disc is a 10 minute silent short, Cloud Phenomena of Maloja (1924), directed by Arnold Fanck.  This documentary shows Fanck's love for mountains as he shows various cloud formations around a group of mountains in the Swiss Alps.  A very entrancing and beautiful film.

There is also a very interesting photo gallery with behind the scenes shots, promotional stills and advertising for the movie.  I especially enjoyed some of the life-on-the-set photos.

This film has some lovely scenery, but that can only carry a movie so far.  The lack of a decent story and almost no characterization make this a tired and overly long film.  There was some suspense at the end, but by that time it was too little too late.  The fact that the race to save Hannes at the end didn't have anything to do with the love triangle that had been the main driving force of the movie up until that point was a little odd too.  I'm glad I watched it, but don't think I'll be putting this disc in my DVD player anytime soon.  Rent it.