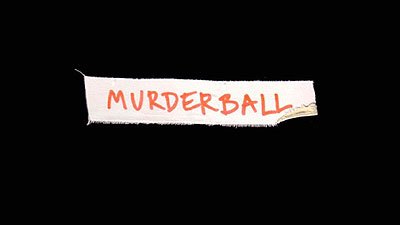 
The Movie
Sports documentaries that focus solely on what happens on the field of play rarely interest non-sports fans. No matter what any hyperactive SportsCenter anchor says, the competition that goes on in organized sports can't compare with the drama evident in the battle for survival that is everyday life. And that's exactly why Murderball is just so good. Every athlete depicted has overcome more than Willis Reed on his worst day.

The quadriplegic athletes in this film lost capabilities in all four of their limbs through a variety of ways, but they all have the same need, and that's a need to compete. In order to feed that desire, they join a wheelchair rugby team, and compete against the best of the best in international competition, culminating in the 2004 Paralympics in Athens.

Along the way, the movie introduces several members of Team USA, including the film's stand-out star, the tattooed bad boy, Mark Zupan. Zupan was a dream find for the filmmakers, as his story is dramatic and unique, especially the way he was handicapped. The owner of a bad attitude and a hardcore look, he is the perfect representative for these alternative athletes. The fact that he brings a ready-made conflict into the film just makes it better. 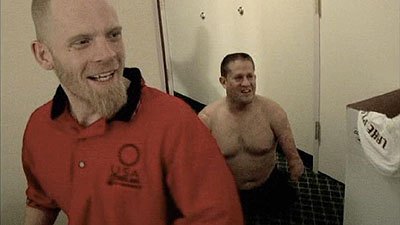 That conflict, with his egotistical and highly-driven former teammate Joe Soares, is directly out of the sports-film handbook. Having been dropped from Team USA, Soares took flight to Canada, becoming the head coach for Canada. With revenge on his mind, and a spot as a traitor in the minds of his former friends, Soares gives the film its main "villain," providing a stodgy, angry counterpoint to Zupan.

As noted earlier, if it was just about the battle between these two teams, the film wouldn't be able to escape the ESPN ghetto. Instead, Zupan has a classic tragic hero backstory that plays itself out in front of the camera, while Soares is a perfect example of the father/husband who lets sports become too important to their lives. Seeing how his wife and son suffer from his obsession is a sad yet interesting storyline that gives depth that the movie might lack otherwise, since most of the characters are single guys without anyone to truly affect.

The athletes are interesting in their own right, but showing a newly quadriplegic young man, and how he adjusts to his new life fills out the story in a way the experienced "quaddies" couldn't. Keith, who was injured in a motocross accident, is just finishing his rehab, and trying to find what a handicapped life holds for him.

Much as it did for the members of Team USA, murderball holds the possibility of a new way for Keith to enjoy an active life, an opportunity he wants to embrace, even if he may not be up to it yet. His future gives the film a chance to explore all aspects of quadriplegic life, including those most people would be curious about, like sex. The true scene from a film about quadriplegic sex is worth the price of admission alone.

Being an MTV film, the movie has an inspired, stylish look, utilizing quick cuts, on-screen graphics and some very striking, effective animation that makes the expositional scenes work better than they might have. In explaining the rules and introducing the game and the concept of quadriplegia, the film took on the feel of something of a live-action instructional manual. The creators really made it work, as it blended into the overall film, instead of standing out like a sore thumb. As a result, Murderball is full of energy and fun, that balances out the more human emotion of the stories.

The film ends in much the way most sports films do, with a big championship game and a coda that tells what happened next, but it feels a bit anti-climactic. While it could be viewed as something of a failure, the fact that you won't leave the film feeling disappointed says that the movie worked very well. Most people will tell you that not having an ending can be fatal to a story, but here, it's just another challenge thrown on the pile. 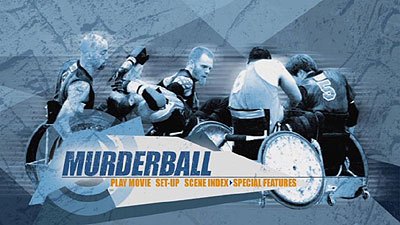 The DVD
Murderball is a one-disc release, packed in a standard keepcase, without an insert. The disc features an animated, anamorphic widescreen main menu, with animated transitions to the animated submenus. The first menu has options to watch the movie, adjust set-up options, select scenes and check out the special features. The set-up options include English Dolby Digital 5.1 and 2.0 tracks, while the scene index has titles and animated previews for each chapter. There is closed captioning, but no subtitles, despite the presence of a selectable subtitle track on the DVD.

The Quality
As a documentary, this anamorphic widescreen film wasn't shot in controlled lighting or on top-notch film stock, resulting in a wide variety of quality in the look of the movie. Darker scenes suffer from video noise, while day scenes can be a bit soft, with color bleeds, wash-outs and a lack of detail. The game footage is even rougher, as one would expect when it comes to high-speed video. The best-looking scenes are those shot during the Paralympics in Athens, which is likely due to the network-quality lighting in that venue.

The 5.1 soundtrack does well in presenting the very strong music in the film, pushing it to the surrounds, making the sound field deeper. The dialogue sits front and center, and is quite clear and distinct. When it isn't, thanks to the recording, burned-in subtitles are used to show what's being said.

The Extras
Two feature-length audio commentaries are included on this DVD, one with the athletes and one with the filmmakers. Murderball players Zupan, Hogsett and Cohn provide a casual, conversational track, approximating the experience of watching the film with them. They make fun of each other, talk a bit about bits that didn't make it into the film, and share their thoughts about their former teammate Soares, a man about whom they have plenty to say. Unlike similar commentaries from Kevin Smith's crews, this one has quite a bit of dead air.

The other track features producer Jeffrey Mandell and directors Dana Adam Shapiro and Henry-Alex Rubin, and takes a more technical/filmmaker point of view. It's not nearly as rambunctious as the players' track, but is interesting nonetheless, as they explain the decisions they made and challenges they faced in making the film. It's exactly what anyone interested in documentaries and aspiring documentarians would want to hear.

A 40-minute episode of CNN's "Larry King Live" features five of the film's stars, and a call-in by Igoe. King's not exactly prepared for the interview nor able to converse smoothly with the guys, and the callers don't help, including some hometown fans. Despite the rough stuff, it's still a nice addition to the package.

"Murderball: Behind the Game" runs almost half as long as King's interview, but is much more informative. The featurette, featuring interviews with all the major players, is like a more focused version of the movie, told entirely with talking heads and footage from the film. If you finish the finish the film wanting a more in-depth look at the story, this will provide it. The same can be said about the "Joe Soares Update Interview." The film's "villain" sits down in front of the camera to answer some questions that people may have for him after seeing his story.

The 20-minute "'Jackass' Presents Murderball" special is the obligatory MTV tie-in for the film, but it's not as fluffy as some others have been, as one might expect from the "Jackass" crew. Johnny Knoxville, Steve-O, Wee Man and Chris Pontius take in a screening of the film (which the cameras show), and then meet members of the team for a night of bar shenanigans and a day of "Jackass"-brand stunts like "The Black-Eye Game" and "Cattle-Prod Jousting." There are a lot of clips shown, and the more promotional moments are awkward, but it is at least amusing and the tie-in is not entirely forced, considering the way the athletes behave. Sadly, unlike the film, this special is censored.

Six deleted scenes, which can be viewed separately or via a "play all" option, are mostly of the extended-scene variety and wouldn't have helped the film much. Only the food fight will be of much interest to fans of the film. "NY City Premiere" is similar in that way, as it shows Keith receiving his murderball chair at the film's premiere. The audio is pretty bad, so you just have to follow along.

The least appropriate extra for the film is called "THINK MTV Disability Awareness." A link to a Web site PSA about disability, the entire thing doesn't jive with the film's pitiless attitude toward disability and just seems hypocritical for the "cool kid" network. The intention may be good, but it feels a bit cynical and unnecessary.

A set of trailers are also included in a big bunch. 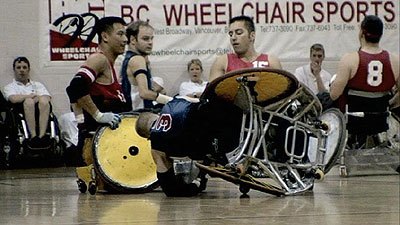 The Bottom Line
Murderball may be one of those rare films where false advertising doesn't lead to disappointment. Instead of illustrating the "extreme sports" side of paralympic athletes, as the promotional materials hinted to, this film is actually a tender portrait of people who live life through sport and those whose lives they affect. Though the ending fizzles a bit, the overall film is quite enjoyable, thanks to a wonderful production effort and a very interesting group of subjects.

The DVD production is impressive, presenting the film properly, with a very deep group of extras that enhance the feature film. If you don't like documentaries, give this film a chance, and there's a good chance you won't regret it. If you have any interest in the film, you're going to be very happy about this DVD.