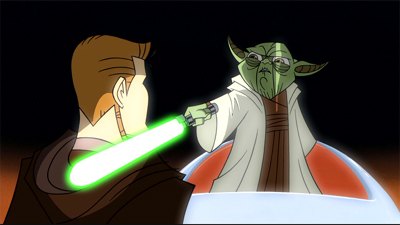 Ever since the original Star Wars trilogy, fans everywhere have wanted to know more about the mystery surrounding the Clone Wars. Obi-Wan had vaguely spoken of it, but when Attack of the Clones was released and the wars were about to begin, there was hope that we would finally be able to see what transpired. Unfortunately Revenge of the Sith had other fish to fry (no pun intended, Anakin) and the Clone Wars had been put on the back burner. As luck would have it though, the Cartoon Network and Lucasfilm Ltd. collaborated to produce and air an animated project simply titled Star Wars: Clone Wars.

This little series was headed by Genndy Tartakovsky, who also happened to be the man behind Samurai Jack. Knowing that going in, the quality of the show immediately spoke for itself and with the help of some heavy advertising by the network, it was a success.

In case you are unfamiliar with the concept behind the show, you could say that the series was essentially "fill in the blank" material between Episodes II and III, but that doesn't really do Clone Wars justice since it truly was much more. The show answered many questions, both those asked and not, from subtle things like how Anakin became a Jedi Knight to how Grievous got his cough. To be fair though, there are many more nods to the new trilogy, as well as the old, so no fan should really feel left out.

The series was broken down into three seasons and those were split into two DVDs. Why these couldn't have just been compiled onto one DVD is beyond me, but a person has to speculate that it was more of a marketing ploy than anything else. For that matter it's strange that the second release of the Clone Wars didn't coincide with the street date for Episode III. Either way, if you've waited this long for the second installment you'll really just be pleased to get your hands on it.

The first two seasons of the show aired in three minute shorts and in all there were twenty episodes produced for them. This pair of seasons won an Emmy award for "Outstanding Animated Program" in 2004 and was glued together for the first DVD volume. Instead of getting short bursts of programming, the disc offered a seamless experience that proved to be very theatrical. The same can pretty much be said for the third season of the show and the five twelve minute episodes from it are contained on this second DVD release.

In the first volume the Clone Wars had spread throughout the galaxy and the forces of Dooku and the droid army were amassing. Obi-Wan and Anakin each get assigned separate tasks to perform, which eventually leads to Anakin being lured away by a Sith assassin. We see the most development with his character, especially when it comes to the decision to allow his opponent to live or die. The volume ended with the introduction of General Grievous and a climactic battle between him and some Jedi. That's exactly where the second volume picks up. 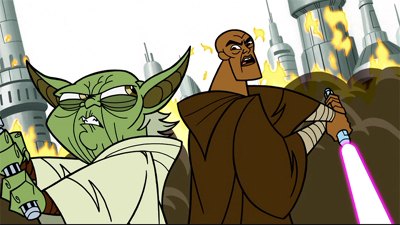 I don't want to give too much away as far as what happens in the third season in case you haven't seen it, but let's face it; we all know how Episode III went anyway. The season starts with a squad of ARC Troopers locating and extracting the Jedi who had found themselves locked in combat with Grievous. Ki-Adi-Mundi was putting up a heck of a fight, but realized that in this place the battle was not going favorably. That's not the last you'll see of Grievous in this series though, he appears later on to snatch Supreme Chancellor Palpatine and develop that nasty cough of his.

The Jedi Council reluctantly bestows the rank of Jedi Knight to young Anakin, but he has yet to face his final trial. He and Obi-Wan find themselves on an icy planet where the Techno Union is conducting mutagenic experiments on a local race. Anakin has a dark vision that is very prophetic and true to his tragic future. It's certainly interesting to see him travel down a darker path, which was something that the new trilogy didn't really explain all that well in my opinion.

The second volume helps introduce several things that tie into Episode III and even though you technically saw them first in the movie, this is where they fit into during the timeline. We get introduced to the Magna Guards, which are those staff swinging body guards that Grievous totes around. Speaking of Grievous, the Clone Wars also tells how he came to be in possession of the lightsabers and how he learned to use them. All of these events lead right up to the opening minutes of Revenge of the Sith and really help flesh out the back story that was only hinted at before.

There are a couple of iffy moments scattered throughout with some stiff dialogue and awkward scenes, but those don't really happen that often. I'd have to say though, that I enjoyed the Clone Wars better than Episode I and most of Episode II, even if for the simple fact that there was no Jar Jar. Tartakovsky's artistic style does take some getting used to at first, but the bold artwork and flashy animation lend themselves well to the Star Wars universe. Whether you're young or old, if you are a Force fan you owe it to yourself to check out this show. The style is superb, the mythos is rich and this series proves to be a lot of fun to watch. 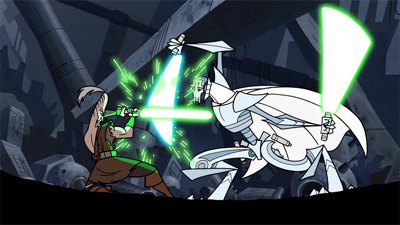 The first Clone Wars DVD offered some amazing image quality and was virtually free of any flaw. Thankfully the same can be said for the second volume and this picture is just about as perfect as an animated show can get. The show is presented with a 1.78:1 anamorphic widescreen transfer and is truly a beautiful thing. The action, artwork and vibrant colors absolutely pop from the screen with clarity that other shows only wish they could have. The image is amazingly crisp and the only extremely minor hiccup I encountered was a slight amount of aliasing here and there.

As you'd expect from a Star Wars DVD, the audio in Clone Wars is amazing. Unfortunately the first volume didn't offer a Dolby Digital 5.1 selection, but thankfully the second installment does. The sound quality is very good with a decent use of directionality and bass for some extra oomph. The only problem with this track is that the volume levels don't work well together and tend to get drowned out amidst the chaos. The channel mix is very good though and is significantly better than the regular Dolby Surround tracks for English, Spanish and French. The subtitle track is sadly captioned, meaning you'll be seeing [Beeps] and [Blaster Fire, Lightsaber] nearly as often as you'll see dialogue.

Just like the first volume of Clone Wars, the second offers up a small array of bonus content that is worth checking out. The majority of the material here is mostly trailers, concept art and such, but there are a couple of other diversions.

The most prominent is an audio commentary with Tartakovsky, art director Paul Rudish, co-writer Darrick Bachman and storyboard artist Bryan Andrews. The guys talk about what it was like working with Lucas and how the direction of Clone Wars came about. It's an interesting commentary with a lot of information for the show and what inspired them for several things. My only beef with the commentary track is that some of the commentators sound like they were away from the microphone, so they tend to get drowned out by the louder speakers.

The only other "real" feature on the disc is "Connecting the Dots", which is a look at how the Clone Wars series works its way between Episodes II and III. It ties in well with the commentary and offers more information about the show. Apart from all of these spots is a short Lego Star Wars bit entitled "Revenge of the Brick". It's pretty funny at parts, but the characters look creepy and the lack of voice acting doesn't help anything out that much. 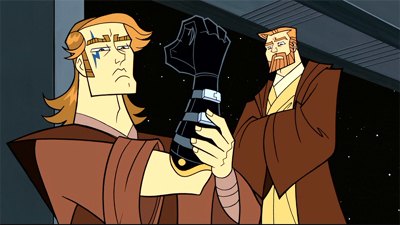 The Tartakovsky animated Clone Wars saga has come to an end and I have to say that it did what it set out to do marvelously. Some of the material is a little far fetched at times, but the show covered nearly all of the bases that needed to be filled. If you haven't checked out the first volume yet and are a Star Wars fan, you owe it to yourself to do so. The second volume is just as rich and really helps round things out, though the Anakin storyline seemed a little silly at times. As far as the DVD goes, the video quality is phenomenal and the addition of a 5.1 track helps the audio out in a big way. Highly Recommended