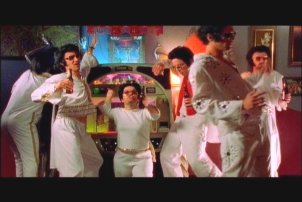 Religion is a hot button topic in our current Red State/Blue State dynamic, a real cultural and social dividing line. As a result, films centering on belief either come off as incessantly fundamental - more onscreen revival meeting than actual cinematic entertainment - or psychotically disrespectful - so eager to take the opiate of the masses to task that they usually throw out the ethical baby with the staunchly atheistic bathwater. Comedy is of course, off limits, since no one (not even a clever word-Smith named Kevin) can seem to make 'dogma' deep and witty at the same time. Enter Gory Gory Hallelujah. This perverted parable, a self-described "fairytale" for the upcoming Armageddon, is that real deal rarity - a creed based satire that actually works. Far funnier than you'd imagine, it also offers up more insight into the mechanics of belief than your usual Jesus-inspired jokefest. It's a triumph for its female filmmakers, and a lost gem amongst the usual Indie idiocy. 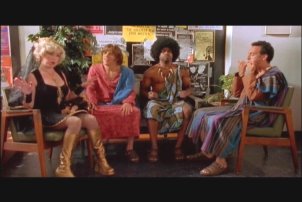 Four eager actors - a bisexual pretty boy named Sky, a nebbish Jew named Joshua, a big black radical named Rahim and a proto-feminist female named Jessie - all audition for the role of Jesus in a local production of The Greatest Play Ever Written. When they fail to get the part, they head to New York City to try their luck. Along the way, they have a barroom brawl with a bunch of Elvis impersonators, and tragedy ensues. Now, on the lam from the expected law, the quartet ends up under arrest in the small hillbilly hamlet of Jackville. A staunchly conservative - and supposedly ultra-religious - little town, the local populace is perplexed by these radical thespian rejects. Eventually, the actors learn the truth - they are being set up to condemn a local black man - Mr. Mo Jack - who holds a valuable piece of land that a shady real estate developer wants to get his hands on. It will take an apocalyptic event to save the day, and keep the Christ-wannabes from shouting Gory Gory Hallelujah. 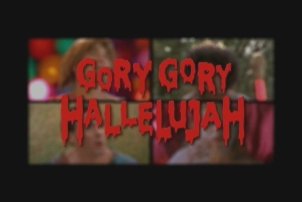 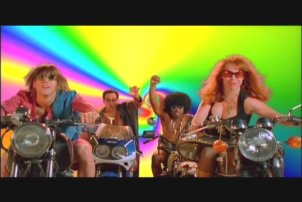 Sometimes, something so original comes along that it takes you aback for a moment, throwing off your usually sound and set criteria and aesthetic and causing you to readjust your critical radar (if only a little). Though it's smartly realized narrative kind of falls apart toward the end, and its breakneck pacing means that much of the subtleties get lost in the chaos, Gory Gory Hallelujah is still one exciting, engaging film. Part religious rant (pro and con), part faith-based freak-out, this thoughtful provoking farce may seem, at first, like nothing more than an outright dismissal of all organized belief systems. But thanks to the keen, clear satirical eye of writer Angie Louise and director Sue Corcoran, this film transcends its low budget Indie trappings to function as both Bible bashing and spiritual re-awakening. Not everything it says about God, the Devil and their individual disciples on Earth is prophetic or prescient, but it is all done in such a sharp, sincere and surreal manner that the meaning eventually becomes clear. 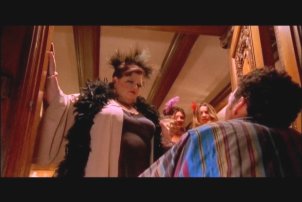 Part of the movie's skill derives from its talent and tone. Corcoran has an excellent eye, carefully composed compositions meshing with masterful mise-en-scene to bring artistry to the anarchy depicted. Her use of color is cheerful and direct, and the overall mood of wicked wackiness compliments the complex scripting perfectly. One wonders how much of the dialogue and action of Gory Gory Hallelujah was actually written out and how much was ad-libbed or developed on the spot. One imagines that a great deal of the film was thought out in advance, since it is so sharp and well considered at times. Angie Louise has a very interesting style - a combination of ironic and idealistic - that gives the movie zing without a lot of zaniness or unpolished silliness. The narrative seems driven by a desire to understand the nature of God, to determine the complexities of religion and the validity and/or fallacy of many of faith's more befuddling teachings. Together, Corcoran and Louise's slyness never stumbles and the film never becomes obvious in its opinions or ideas. 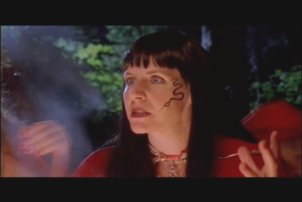 The acting is also first rate. All four of the Jesus jonesing leads - Tim Gouran and stoner sex addict Sky, Jeffrey Gilbert as the militant Rahim, Todd Licea as the nice Jewish boy Joshua and Louise herself as the love starved Jessie - walk the character tightrope between cliché and correctness, stereotype and individuality so carefully and clearly that they come alive as believable and three dimensional. Even when addressing those standard pigeonholed people like Elvis impersonators, backwoods rednecks and evil businessmen, the filmmakers match the performers in finding the right combination of ridiculous and reasonable to keep their film genuine. Even the slow, rambling realism of Joseph Franklin as Mo Jack finds a perfect home in Corcoran's crazy designs. Balancing over the top with authentic and smart is never easy, yet this fledgling director finds a way to make it all work. It is a credit to a creator when, even with his or her most minor characters, we want to see more of them. That is the case throughout all of Gory Gory Hallelujah. 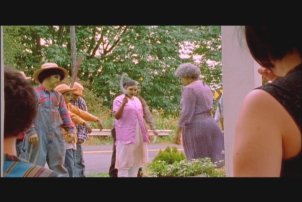 Sadly, the film stumbles a bit at the end, keeping it from being a certified classic (it still sits nicely in the campy cult category). Far be it for this critic to begrudge the ancillary addition of the living dead, but the last act zombie attack seems superfluous, added to keep the fanboys from fogging over the minute the movie got too thick with ideas. There is not a lot of the title grue here, nor are the cannibal corpses that memorable. They are supposed to be Mo Jack's lynched family (talk about controversial content) and yet they represent several ethnicities. There is a last minute attempt to save the inconsistency, arguing that ALL the dead will rise once the Rapture/Apocalypse arrives, but we are never sure if this is indeed the end of the world, or just some much needed comeuppance for the wicked citizenry of Jackville. Had the ending been as brave and ballsy as the rest of the film, Gory Gory Hallelujah would be one of the best outsider films of the year. As it is, it is still a major work of substantial invention and talent. The Von Piglet Sisters (as Corcoran and Louise are known) should be proud of this accomplishment. It is a mostly amazing movie.

The Video:
One of the most striking things about Gory Gory Hallelujah is how fantastic it looks on DVD. One has to imagine that this was a very low budget project, shot on either digital cameras or other non-film facets. And yet, the image here rivals some of the mainstream movies that came out in 2005. The colors are vibrant and alive, the contrasts clear and filled with detail. The 1.78:1 non-anamorphic (RATS!) widescreen transfer is free of defects and always presents a gorgeous, engaging set of visuals. Hats off to the gals for their production technique and an additional set of kudos to the technicians who mastered this release. This is one stellar looking homemade movie.

The Audio:
Thankfully, Corcoran doesn't go overboard with the local indie band bombast for her film. Instead, the score is a quirky combination of lounge leanings, rockabilly rave-up, and standard pop song styling. Thanks to the nicely modulated Dolby Digital Stereo mix, the music never overpowers the action onscreen. It is clean and distortion free. Still, there are several scenes where the dialogue is difficult - if not next to impossible - to hear. Characters start shouting and then the next few lines fail to register on the eardrum. Maybe it is something to do with the movie's move to DVD, but one envisions a couple of days on the set where the sound recorder wasn't on his or her toes. It doesn't destroy one's enjoyment of Gory Gory Hallelujah, but it does undermine the otherwise faultless technical elements of the release.

The Extras:
One can forgive Indican Films for not finding it within their DVD budget to flesh out this film with all manner of complimentary and supplementary added material. Still, something like Gory Gory Hallelujah cries out for some bonus content. A commentary would have been nice, or even a minor interview featurette. Corcoran and Louise deserve a chance to discuss and describe their experiences making this movie. We do get some trailers, a collection of onset snapshots, and a clever compendium of text-based bios for the major characters in the storyline, but that is simply not enough. Original offerings like this need support in their manufacture and marketing, and in the realm of the digital, that spells "EXTRAS". 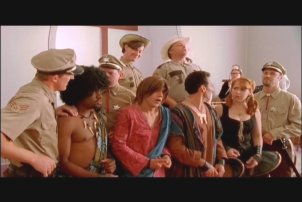 It's always a treat to run across a film that makes you think as it gets you guffawing. Better still is the entertainment that doesn't take the standard route to realize its thoughtful anarchy. Gory Gory Hallelujah is indeed one clever, comic delight. It is a Highly Recommended reimagining of religion as a combination John Waters movie and thrift store sidewalk sale. It has wonderful insights into the nature of God and why people believe, and yet it never takes those stances so seriously that the movie gets bogged down in self-aggrandizement or dreary doctrine. Certainly, the forced finale zombie stomp could have been better set-up and/or explained, and the DVD itself could have contained a wee bit more added content than the standard bare bones offerings, but this is still a film to seek out and celebrate. Hats off to Angie Louise and Sue Corcoran. Don't be surprised if they go from homemade movies to household names relatively soon. They have lots of talent, and Gory Gory Hallelujah proves it in sanctified spades.