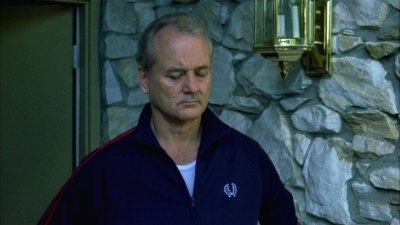 Though it may be dismissed as a slightly more familiar cousin of Lost In Translation (or even a more distant relative of The Life Aquatic with Steve Zissou), Jim Jarmusch's Broken Flowers (2005) is its own entity, though one with its share of similarities along the way. We're introduced to Don Johnston (yes, Johnston, with a "t"), an aging Don Juan-type character who's fallen on some emotional hard times. He's never had trouble meeting women, but he's had more failed short-term relationships than most guys his age. A lucrative career in computers has taken care of his financial needs, but he's been left with lots of free time and too many memories he's trying to forget.

A new memory arrives one day in the mail. It's a pink envelope adorned with red ink: handwritten on the outside, typed on the inside. It turns out that Don has a son from a past relationship---roughly a decade and a half ago---but it's not signed and there's no return address. To figure out who sent it, Don's neighbor Winston (a wannabe sleuth hooked on the Internet) convinces him to narrow down the list of possible mothers and dig up their contact information. The resulting "scheme" is a road trip of sorts: armed with fresh bouquets of pink flowers, Don attempts to walk back into the lives of four women, looking for clues along the way: a typewriter, pink paper, red ink and the like. To say his journey is a little strange, then, would be an understatement.

The only thing that's predictable about Broken Flowers is that some of the women are glad to see Don…and, well, some aren't. One is a recent widow with a flirtatious teenage daughter. One is a married woman living in a sterile, perfect house. One has found her calling as a pet psychic animal communicator. One lives out in the sticks and rides a motorcycle. Through these visits, we learn not only about the women, but we get a hint of who Don once was…at least to them. Fortunately, we're not treated to any ham-handed flashbacks, but we do get a sense of a man struggling through the present. It's almost as if Don is his own Ghost of Christmas Future: he's wandering through what could have been, though he's still not sure if he wants to change his ways or not. 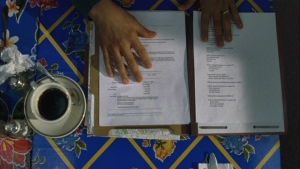 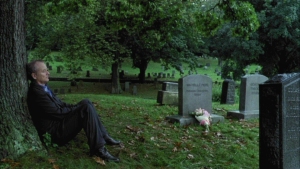 Director Jim Jarmusch has assembled quite an ensemble cast for Broken Flowers, which nearly begins and ends with Bill Murray as our protagonist. His comic timing and subtle expressions are a perfect match for Don Johnston, while his presence on camera is nearly enough to make one forget he bothered with Garfield: The Movie. Supporting performances are quite memorable all around, including the capable Jeffrey Wright as Winston; as well as Sharon Stone, Frances Conroy, Jessica Lange and Tilda Swinton as Don's former girlfriends (other notable roles are filled quite nicely by Chloe Sevigny and Christopher McDonald, among others). If you're looking for a film that really delivers in the acting department, you'll find a lot to like in Broken Flowers.

If you're looking for a film with non-stop laughs and an ending that ties everything together neatly, don't even bother. These aren't faults, of course, but that's not to say that Broken Flowers doesn't lose its footing at certain times. The film's linear story works well the first time through, but it almost begs to reward the viewer upon repeat viewings. Unfortunately, it doesn't seem to be completely up to the challenge; in fact, it almost becomes a victim of its own atmosphere as the story becomes all the more familiar. We never learn a great deal about Don Johnston throughout the course of Broken Flowers, only that he's a man who's lost something and is still looking. If you're not in the mood for it, you'll probably feel the same way after the credits roll.

Even so, Broken Flowers has plenty of things going for it, and that's more than enough to make it worth checking out for fans of the cast and crew involved. Universal's DVD treatment is a very basic effort that may frustrate those who want to dig deeper, but it's still a passable package for those looking for something a little different. Let's take a closer look, shall we?

It's a bit dark and grainy, but Broken Flowers looks exceptional on DVD; in fact, the only "problems" here parallel the film's intended look. The color palette is solid and there are no digital problems (edge enhancement, etc.) to speak of, rounding out the visual presentation nicely. Overall, this 1.78:1 anamorphic widescreen transfer has made the film-to-DVD transition quite well.

The audio mix is subtle but the dynamic range seems a bit loose, making for a somewhat disjointed listening experience. Presented in Dolby Digital 5.1 or 2.0 Surround (NOTE: the actual disc incorrectly sports a DTS logo), either option doesn't offer much in the way of atmosphere. This isn't a bad mix---after all, the audio is clear when it's really needed---but there are quite a few missed audio opportunities during the main feature. On the plus side, optional English, Spanish and French captions are also included (even for the extras, which earns a few bonus points). 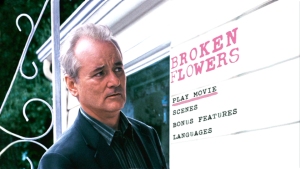 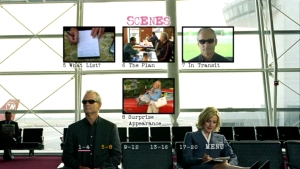 The presentation for Broken Flowers includes static menus (seen above) paired with the film's jazzy, offbeat score. This 104-minute film has been divided into roughly 20 chapters, while no obvious layer change was detected during playback. The packaging is also very straightforward, as this one-disc release is housed in a standard black keepcase with no inserts.

Bonus Features:
The extras included here are abstract and somewhat interesting, but they don't offer much support for the main feature. First up is "Girls on the Bus" (2 minutes), a series of outtakes with the gabby girls from one of the film's earlier scenes. Next up is Broken Flowers: Start to Finish (8 minutes), a montage of on-the-set goofing with Bill Murray sandwiched in-between chronological clapboard footage. There's also "The Farmhouse (4 minutes), more rough outtakes combined with Jim Jarmusch's thoughts on the directing process, as well as the film's excellent Theatrical Trailer. Last up is a throwaway Advertisement for the soundtrack, which unfortunately is the only widescreen extra that's been enhanced for 16x9 televisions. It's a shame that there's no commentary with Jarmusch (or at least an additional interview), but after hearing his thoughts during "The Farmhouse" I'm not surprised. Still, the film stands up fairly well on its own two feet.
Final Thoughts

It's much closer to The Life Aquatic or Lost in Translation than Caddyshack, but any fan of Bill Murray should admire his performance in Broken Flowers. The story could've been tighter, but there are still quite a few memorable stops during our protagonist's strange and unpredictable road trip. Unfortunately, the DVD doesn't offer much more than a decent technical presentation; combined with the film's lower replay value, it's a disc you'll watch but not very often. Those who enjoyed Broken Flowers may want to pick this up right away, but everyone else should dip their toes in the water before jumping in. Nonetheless, this DVD comes mildly Recommended.