I was a little skeptical about seeing Transporter 2 in theaters a few months ago, but it wasn't because I don't like the occasional popcorn movie; after all, I have Deep Blue Sea on the same DVD shelf as Ikiru. It was because I hadn't seen the first film in the franchise, though my friends assured me I'd get a quick explanation on the way to the theater and I could jump right in.

They were right, but most fans of "leave your brain at the door" movies shouldn't be surprised; after all, these time-killers don't attempt to get by on story alone...and God help them if they do. Transporter 2 basically sits right in the middle of both camps: it doesn't take itself too seriously, but it's nothing we haven't seen before. After all, you can only see so many rich, good-looking foreign guys resorting to kidnapping, extortion and terrorist activity to become even richer before you start to wonder if these people grow on trees.

Instead, let's take Transporter 2 for what it is: a series of decent action sequences tied loosely together by a weak story and thin dialogue. It's not the first movie to do this and won't be the last, but it's still not a terrible way to spend 90 minutes. The fight scenes (choreographed by Corey Yuen) are fast and brutal, while the car chases are equally impressive---though both suffer from unconvincing CGI at times. Even so, Transporter 2 is easy to get lost in, but equally easy to forget once it's over.

This time around, our hero Frank Martin (Jason Statham) has changed from a somewhat believable "delivery man" into a nigh-invincible superhero…which should irritate a few die-hard fans of the original but shouldn't drive them away completely. The villains are hit-or miss all around, including the generic Columbian mastermind Gianni (Alessandro Gassman), his pencil-thin, raccoon-eyed love interest Lola (Kate Nauta) and, of course, their army of dedicated henchmen.

Supporting characters in the "good guy" camp include Audrey Billings and her husband (played by Amber Valletta and Matthew Modine), the parents of a young boy who's been kidnapped; also present are the returning Inspector Tarconi (François Berléand) and Detective Stappleton (Keith David). None of these supporting characters are given much to do, other than kill time in-between the action. The only other highlights during the 89-minute runtime of Transporter 2 include the film's terrific visual style and Alexandre Azaria's original score, which help to keep the film from crumbling under numerous plot holes and other missteps. Still, it's all in good fun.

Presented by 20th Century Fox, Transporter 2 is a bit disappointing on DVD, as this two-sided disc rarely focuses on things the film actually does right. Word has it that director Louis Leterrier had to trim the film down to a PG-13 from its original R, so perhaps we'll see an Unrated cut surface later in the year (bet you didn't see that one coming!). Either way, this lightweight release wouldn't be a bad choice over the weekend, but let's have a closer look just to be sure.

Stylish and generally pleasing to the eye, the 2.35:1 anamorphic widescreen transfer is good but not quite perfect (NOTE: this release also includes a pan-and-scan transfer on Side B). Only a handful of scenes appear murky and dull, though they're easily spotted due to the film's high-contrast visuals and (intentionally) over-saturated colors. A few other quick cuts appear slightly washed out and flat, but they'll whiz by fast enough for most viewers not to notice. Only a small amount of edge enhancement was spotted, though no other digital problems seem to pop up. Overall, the visual presentation isn't quite as strong as I'd hoped, but it's certainly not a bad effort.

Presented in Dolby Digital 5.1 (with optional French and Spanish 2.0 Surround mixes), the audio presentation for Transporter 2 gets the job done nicely. There's obviously a lot of action on display during this film, and it's put to good use with plenty of ambience and a strong dynamic range. Dialogue (both regular and cornball) is clear and easy to understand, while the disc also includes optional English and Spanish subtitles for the main feature only. 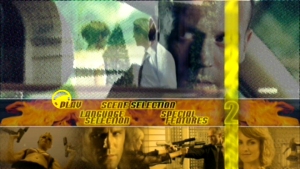 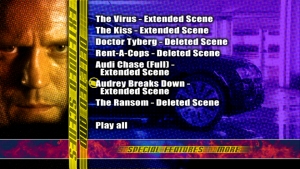 The anamorphic widescreen menus (seen above) are basic and practical, allowing for smooth and easy navigation. This 89-minute film has been divided into 24 chapters, while no layer change was detected during playback. This one-disc release is housed in a standard black keepcase with no insert, though the final DVD packaging may differ from this screener copy.

Bonus Features:
Preface: I hate it when studios divide the extras on each side of a DVD, but this screener copy of Transporter 2 makes the problem even worse: there's a promotional label on one side, so I can't even see 'em all (though at least I'm not losing the widescreen transfer). "Official" copies won't have any such problems, of course, but you'll have to evaluate those bonus features yourselves (though if Fox would send over the final product after release day, I'd gladly update the review).

On to business: included on the playable side of this screener is a series of Deleted & Extended Scenes (14 segments, 21 minutes total) that don't really add much to the overall experience. Essentially, there are several new character moments and a few slightly longer (and bloodier) fight sequences, but there's nothing of major importance here. Many of these alternate takes also include different music cues, so at least it's interesting to see how different music affects certain scenes. Just for the record, the "missing" bonus features include a pair of featurettes ("Behind the Scenes" and "Making the Music"), at least according to the screener packaging.

This is about as lightweight as DVDs get, folks: both the film and the limited extras aren't anything you haven't seen before, but they're not a bad time-killer on a Friday night. I'd be lying if I said that Transporter 2 wasn't entertaining---and at least it doesn't take itself seriously all the time---but it's a whole that could never be much more than the sum of its parts. If that sounds like something you'd watch again and again, this release should fit comfortably in your library. Either way, I'd imagine that most viewers should be able to see this in its present form and be satisfied---so even if it's not a disc worth owning, it's good enough for a weekend spin. Rent It.