Best of The Electric Company (4-Disc Set), The 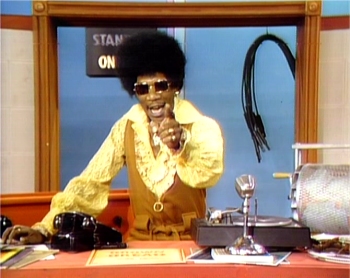 As the 1960s winded down, the United States Office of Education, Carnegie Corporation Foundation and the Ford Foundation launched the Children's Television Workshop, an experimental attempt to deliver new and creative kid's TV programming. The first offspring of the CTW was none other than Sesame Street, a childhood favorite of many during the last three decades. The second was The Electric Company, a like-minded show geared towards elementary students and the joys of reading. Premiering in 1971, roughly a year after Sesame Street, The Electric Company enjoyed a successful run through the mid 1980s; though new shows stopped being made after 1977, it was just as successful in syndication.

Time marches on, so anyone who grew up long after the show's lifespan will probably only remember it as the victim of a few Family Guy cutaway gags. As for me, I was just about the right age to catch The Electric Company in syndication growing up, so I have faint but fond memories of Easy Reader, the Silent "E" song and many other skits and lessons that helped the series work so well. As much as I hate to admit it, The Electric Company made reading pretty darn enjoyable. Just don't tell my parents and former teachers, OK?

For as much as I faintly remember about the series, there's plenty more I missed the first time around. To the best of my knowledge, nearly 800 episodes of the show were created---far more than even the most rabid fan could memorize (though maybe I underestimate a few folks). Plain and simple: that's not going to happen on DVD, so we've got to settle with what we get. Luckily, we're getting a nice starter set from Shout Factory in The Best of The Electric Company, a 4-disc collection of 20 episodes and a few other goodies. Featuring a variety of content from the show's six seasons---featuring cast members Bill Cosby, Morgan Freeman (seen above), Rita Moreno and more---there's a lot to enjoy. 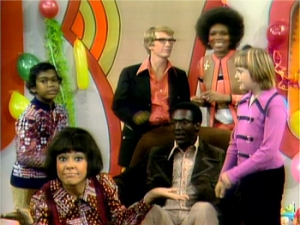 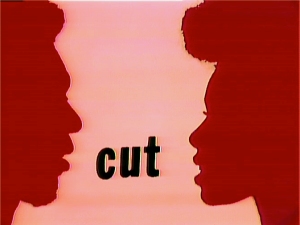 Though I haven't seen The Electric Company in over 20 years, each episode appears to be complete and unedited---even those featuring Spider-Man, The Road Runner and other licensed characters. Regardless of the episode lineup, the fact that we're getting the original content should be more than enough to sell fans of the show. From Easy Reader to Paul the Gorilla, you'll have a blast getting reintroduced to lots of childhood friends---and who knows, you might be able to brush up on your grammar in the process. With any luck, The Electric Company will help tidy up Internet message boards the world over. n00bs.

The series' massive tally of episodes all but ensures that many favorites will get left behind, but this four-disc set is a great primer that covers the bases nicely. Younger viewers (i.e., the children of those who grew up watching The Electric Company) may or may not be able to jump right in, while kids of the 1970s and early '80s will undoubtedly enjoy this monster block of lovingly assembled nostalgia. With roughly 10 hours of regular content, The Best of The Electric Company almost borders on overkill already---but I'm willing to bet there's a rabid group of fans out there who'll do their part to get future collections released.

To sweeten the pot even more, Shout Factory has added a handful of nice extras to this compilation; I wasn't expecting much more than the episodes themselves, but I'm glad they went the extra mile. This compilation is unofficially "hosted" by Rita Moreno ("Hey you guyyys!") and also includes a few interviews and retrospective pieces with other members of the cast and crew, though Morgan Freeman and Bill Cosby are sadly nowhere to be found. While the technical presentation is a little on the rough side, this is still a very solid collection that fans, young and old, should really enjoy.

It's pretty rough road in the visual department, but we shouldn't be surprised. Presented in its original 1.33:1 format, The Electric Company looks soft, fuzzy and riddled with video noise and other problems (though the colors appear bright and vivid). To be fair, the bulk of these episodes---which appear to have been culled from their original video masters---probably look as good as they ever will, so this DVD presentation should be graded on a slightly looser scale. In comparison, new interviews with the cast and crew look great.

The audio is also basic but slightly improved. Presented in the show's original 1.0 Mono mix, The Electric Company comes through clean and clear with no major hiss or distortion. Those who prefer a wider soundstage should set their receivers to "Stereo", but these episodes don't sound bad either way. Unfortunately, no optional subtitles have been provided for this release, though it seems to support Closed Captioning. 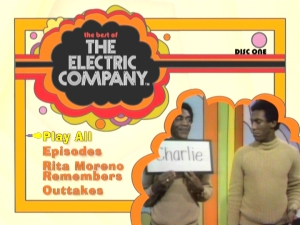 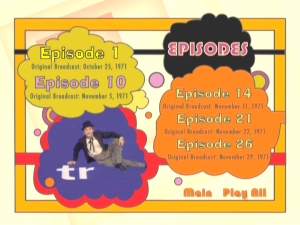 Perfectly suited to the series' atmosphere and style, the menu designs (seen above) are fun and practical, offering a clean layout and easy navigation. Each 30-minute episode has been divided into three chapters (introduction, episode, trivia), while no layer changes were detected during playback. The packaging for this 4-disc set is unknown, though the screener arrived in a thick keepcase with two double-sided hinges inside. No booklet was included, though final packaging may vary slightly.

Bonus Features:
For starters, each of the 20 included episodes are prefaced by brief Introductions with Rita Moreno and post-episode rounds of Trivia. The introductions themselves are more than welcome; while most simply announce what each episode has in store, Moreno also shares some interesting background information on several occasions. The rest of the bonus features are spread out over all four discs---they're not extensive, but there's some really great stuff on here that should be new to just about everyone.

Disc One is home to "Rita Moreno Remembers" (9:56), a stand-alone interview with the star who shares a bit more information about the show's production and history. There's also a terrific series of Outtakes (6:49), including a handful of bloopers and at least one off-color remark from Bill Cosby.

Disc Two includes "Joan Ganz Cooney: Then & Now" (10:30), an interview with the creator of The Electric Company (and Sesame Street) prefaced by a vintage promotional pitch from the 1970s.

Disc Four brings up the rear with "June Angela Remembers" (5:32), who talks about her long-running role as one of the Short Circus youngsters on the show (hint: she's the Asian one). Overall, it's a great mix of extras that could have only been improved by more cast interviews or even a commentary.

Whether you want a quick fix of nostalgia or a 10-hour marathon, The Best of The Electric Company has got you covered from A to Z. Nearly two dozen of the long-running series' most memorable episodes have been selected for your viewing enjoyment, while the small but mighty mix of bonus features are icing on the cake. Though the style and content of The Electric Company is perhaps best viewed in smaller doses, this 4-disc collection will be one that kids and adults should have no problem enjoying many times over. Here's hoping that Shout Factory keeps up their great work on this series---and while they're at it, a collection of Sesame Street would be a great follow-up. For now, enjoy the show! Recommended.