Company of Wolves - Special Edition, The 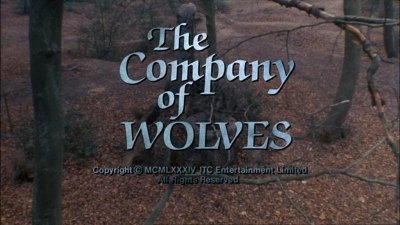 "Never stray from the path, never eat a windfall apple, and never trust a man whose eyebrows meet."

The Movie:
Neil Jordan wouldn't achieve breakout mainstream success until his 1992 hit The Crying Game, but earlier in his career had directed a number of smaller gems in the UK and his native Ireland such as Mona Lisa and The Miracle. Only his second feature film, the 1984 adult fairy tale The Company of Wolves, a reworking of Little Red Riding Hood as a metaphor for a young girl's burgeoning sexuality, is another minor masterpiece that shows Jordan as already a major filmmaking talent just waiting to be recognized. 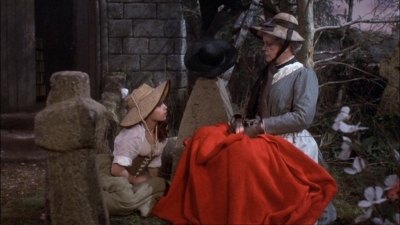 Adapted from a pair of short stories by author Angela Carter, whose writings put a feminist spin on famous folklore tales, The Company of Wolves opens with a large dog, wolf-like in size and speed but domesticated in appearance and demeanor, racing through the woods. It arrives at a sizable country estate in what is ambiguously the modern day where it is recognized as a pet and welcomed into the home by a pair of bickering girls, one teenaged and the other on the cusp of it, and their family. That night the younger girl Rosaleen dreams of her older sister running through the same woods, but darker and menacing, and clearly running away from something rather than towards it. In her path are objects of childhood: a dollhouse, dolls, and teddy bear, all inflated to grotesque and threatening proportions, driving her off the path deeper into the woods, where she is cornered and attacked by wolves. Rosaleen, still comfortable in bed, smiles in her sleep, pleased to dream of her annoying sister getting some comeuppance.

The next morning we are transported back a few hundred years and find Rosaleen and her parents now living in a tiny rural village, as the elder sister who was killed by wolves is buried amidst tears and mourning. Rosaleen's grandmother, a woman of matronly warmth with strangely devious undertones, offers sage advice about the dangers of straying from the path and the wisdom of always heeding the instructions of one's elders. Rosaleen nods but pays little attention, inappropriately distracted by a flirtatious boy her own age. Later she will find many temptations to experience the things in life that she has been warned against, and must decide whether to allow her impulses to prevail over the supposedly better judgement she's been taught.

What follows is a fascinating amalgamation of children's fairy tale and adult werewolf story, transforming the original cautionary moral of the fable, that little girls should always do what they're told, into an empowering allegory for the blossoming of womanhood and the importance of finding one's own way in life. The film is structured as a series of stories within stories, from the outer layer in what appears to be modern times to the fairy tale village of the past, and beyond that into several smaller sub-stories told either to or by Rosaleen. It presents a mix of fantasy, dreams, and nightmares, some of playful innocence and others of dark eroticism. The movie is littered with overt metaphors, both literary and visual. The path through the woods obviously represents the girl's path through life, and her straying from it a break from the traditions imposed by her family. And when we finally meet the men who turn into animals ("The worst kind of wolves are hairy on the inside," Granny says), they don't just spout hair and grow snouts; they tear off their human faces to reveal their real faces underneath, unleashing the sexual beast hiding beneath the surface of all men. 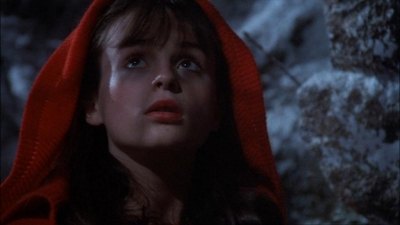 The young actress Sarah Patterson who plays Rosaleen is a little inexperienced and stiff, but gets the job done with able support from veterans such as David Warner and Terence Stamp, as well as the obligatory appearance of Jordan-favorite Stephen Rea. Angela Lansbury as Granny channels a bizarre cross between the dotty witch of Bedknobs and Broomsticks and the subversively evil matriarch of The Manchurian Candidate. The film was made with a low budget but is lushly visual, featuring terrific production design by Anton Furst (the man who later made Batman such a feast for the eyes), and excellent cinematography. Some of the animatronic werewolf transformations look a little dated and hokey, which may put off younger viewers jaded by seamless digital effects or expecting a full-bore horror picture, but are effective at conveying their intended purpose. The movie has a truly dazzling sequence concerning pompous 17th Century aristocrats getting their due, and one simply miraculous image involving a wolf's head and a bucket of milk that had an audience audibly taking a huge collective breath when I saw the film at a repertory theater several years ago.

Blatantly mismarketed by its distributors as a straight-ahead werewolf horror movie when it is nothing of the sort, an impression further enhanced by an absurdly strict 'R' rating from the MPAA in the United States, The Company of Wolves didn't quite set any box office records in its day, but did earn enough to be a modest success by the standards of its small budget. Among those who know of its existence, at least those who didn't feel ripped off for not getting the American Werewolf in London knockoff they were promised, it has become a minor classic, the kind of film that rewards a viewer's patience with new meanings and treasures in each repeated viewing.

The DVD:
Its only Region 1 DVD release a dingy non-anamorphic letterbox transfer from Hen's Tooth Video, The Company of Wolves has now received a remastered Special Edition from Granada Ventures in the UK. Packaged in a sleek SteelBook case, the disc is coded for Region 2 playback in the PAL video format and will require compatible equipment to operate. 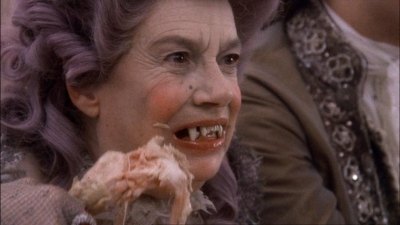 Video:
Contrary to some retailer specs, the Special Edition disc is presented in 1.78:1 anamorphic widescreen, not 4:3 full-frame. The movie was reportedly composed for the 1.66:1 European theatrical aspect ratio, but no doubt also with possible matting to the 1.85:1 American standard in mind. The DVD splits the difference between these two, with negligible impact to the intended framing.

The remastered picture is sharp, clear, and clean, with accurate colors (the reds are meant to be exaggerated) and no edge enhancement artifacts. The movie's photography is somewhat grainy by nature; the DVD's digital compression quality is usually adequate but there are a few noisy shots of the sky. Dark scenes have good black levels, though shadow detail is occasionally a little crushed. Overall, this is a very fine transfer for a film that has long been neglected.

Audio:
I wish I had nicer things to say about the Dolby Surround 2.0 soundtrack. The audio sounds dull and thin. It's set to a low volume by default and turns shrill with amplification. The movie has a lot of whispered dialogue that is often difficult to decipher. The effects of the 4% speedup inherent to PAL video are evident, though are certainly not the root of the problems here. Sound effects are hollow, but this may be an issue with the original low-budget production.

The music is occasionally enveloping, especially with ProLogic II decoding which simulates an effective stereo soundstage from the rear speakers, but fidelity is lacking and the weak cello notes are particularly disappointing.

English captions for the hard of hearing have been provided.

Extras:
Like too many DVDs these days, the disc unfortunately opens with an obnoxious anti-piracy commercial that cannot be skipped. Unlike some recent discs, however, hitting STOP and then MENU on my DVD player did manage to bypass it.

Director Neil Jordan delivers an intelligent audio commentary with emphasis on the production history of the film and its use of symbolism. The discussion is moderated by someone named Robert Ross who is not properly identified. The disc also contains a theatrical trailer that misguidedly tries to sell the movie as a horror picture, and a still gallery with some interesting behind-the-scenes shots of the animatronic devices.

The DVD also has some simple yet elegant animated menus. Inside the SteelBook case is a nice booklet with several essays about the film, author Angela Carter, prominent symbolism, and detailed character bios. The writer of the booklet, however, has an annoying affectation of referring to the subjects of his essays by their first names as if he or she were a close friend ("By 1985 Angela was happily settled in South London with a new partner and a baby" or, "Neil has revisited these themes many times in his career").

Final Thoughts:
A beautiful but long-neglected item, Neil Jordan's early gem The Company of Wolves finally gets a respectable DVD treatment, even if only in Region 2. For region-free viewers this release is highly recommended. Unfortunately, I doubt the indie label studio that holds the U.S. distribution rights is likely to put out anything so nice in Region 1 anytime soon.