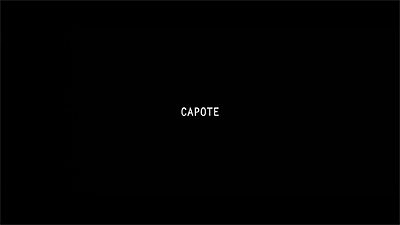 
The Movie
For as famous as he was at one point, Truman Capote's profile is quite low these days. After all, it's been a long time since Breakfast at Tiffany's and In Cold Blood grabbed America's attention the way they did. Actually, it's been a while since any writer's meant a lot to America. (I blame the internet.) But Capote was a big one, in part due to his ability, and partially due to his personality. A flamboyant man with an unusual voice and a sharp wit, Capote was a man who was hard to ignore.

Capote doesn't take the easy route a biopic might take, by telling his life story, but instead tells a story in which he's a character. The basic plot involves the work Capote put into writing his signature non-fiction novel, In Cold Blood, which is credited as being a pioneer in the field of true-crime novels and investigative reporting. Having read about the murder of a farmer's family in Kansas, Capote set up an assignment for The New Yorker, and with his pal, To Kill a Mockingbird author Harper Lee (Catherine Keener), at his side, headed to the heartland to see how the murders affect a small town.

Once there, and having charmed the Kansas folk despite sticking out like a sore city-slicker thumb, Capote becomes fascinated by one of the accused killers, an artistic, sensitive soul named Perry Smith (Clifton Collins Jr.) As Capote gets deeper into his research for the book, he finds himself increasingly involved with Smith, even going so far as to get him a new lawyer for an appeal. Why exactly he does what he does is one of the questions that drives the movie forward and makes Capote such a compelling film, despite a plot that's relatively predictable and somewhat uneventful. 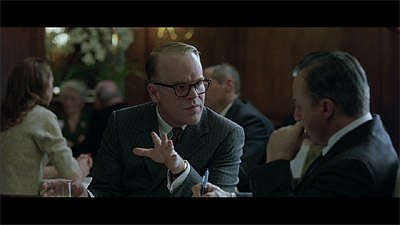 Watching Philip Seymour Hoffman portray the man is nothing short of astounding. Considering the way he dressed, the way he acted, not to mention the way he spoke, Capote could have easily become a cartoon character; a lisping homosexual mincing his way through life. Instead, Hoffman made his Capote a complicated complete person, who lived a life in which telling a good story was worth more than anything in his life. There are several moments in the movie in which Hoffman says nothing, yet conveys more about his character than six pages of dialogue could.

Though at the beginning the film feels like it's going to be The Hardy Boys with Truman and Harper, Keener's part wasn't quite as meaty as it could have been. Despite that, she does a good job as the conscience of the film. Her role as the author of an acclaimed novel is quietly understood, but never over-explained, and as a result, her position as Capote's friend doesn't get overshadowed. It was a smart and important choice on the part of the filmmakers, as her presence allows the conflicts in Capote's life to be explored more fully.

First-time screenwriter Dan Futterman (the son in The Birdcage) did a fine job of exploring a single aspect of Capote, and living by the writer's maxim: "show, don't tell." There's no scene where the plot is laid out for a 2-year-old's comprehension. The story unfolds slowly and with grace, until it succumbs to its own momentum and powers to a fitting and satisfying ending.

Credit for such a natural progression has to go in large part to director Bennett Miller, heretofore known only for his quality documentary The Cruise. Here he shows amazing control of the camera and his cast. Often, a director is only recognized if his style is hyperactive, while a more restrained effort is overlooked. Here, Miller's conservation of camera movement and austere visuals pay off in a cinematic Kansas that's alive and real, giving his actors a helping hand in portraying these real people. By mixing beautiful still landscapes with rigid, cold set-ups, Miller's shown himself to be a true artist and created a beautiful film that's equal parts style and substance. 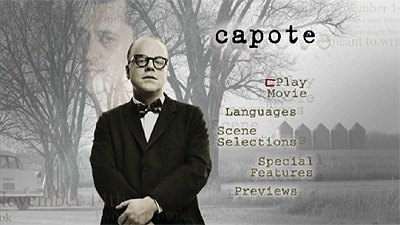 The DVD
Capote arrives on one DVD, packed in a standard keepcase with a promotional insert. The disc has an animated, anamorphic widescreen main menu that offers a choice to play the film, adjust the languages, select scenes, view special features or check out previews. In a nice touch, the cursor for the menus takes the form of various copyediting notation that's very appropriate for the film. Language options include English and French Dolby Digital 5.1 tracks, along with subtitles available in English, French, Spanish, Portuguese, Chinese, Korean, Thai, and even Bahasa. Closed captioning is also included. The scene selection menus have still previews and titles for each scene.

The Quality
The 2.35:1 anamorphic widescreen transfer is simply fantastic, with an extremely high level of detail and a crispness that draws the viewer right into the story. The color scheme in this film was put together for specific effect, and this DVD presents it perfectly. Surprisingly though, there's an obvious amount of dirt in the transfer, specifically in the movie's stunning landscape shots. It's likely attributable to the film's budget and production capabilities, but one would think it would be relatively easy to correct before releasing the DVD. Other than that, it would be hard to describe the look of this DVD as anything but beautiful.

The score for Capote, with its wonderful use of strings and piano, comes through with proper force in the Dolby Digital 5.1 track, flowing forth from the center speaker and spilling into the surrounds when necessary. While the dialogue is crystal clean, atmospheric noises find an affecting home in the rear and side speakers, a few key important sound effects are shocking in their clarity.

The Extras
Sony has provided a decent slate of extras for Capote, starting with a pair of feature-length audio commentaries. First up is Miller and Hoffman. The track isn't the liveliest ever recorded, but the low-key duo cover a wide range of information about the film, sharing plenty of on-set stories, with Miller focusing on production, and Hoffman on the acting craft. They also have plenty of nice things to say about the rest of the cast and crew, with many "isn't he great" style comments.

Miller returns for the second commentary, this time joined by cinematographer Adam Kimmel. Futterman was scheduled to be a part of this track, but wasn't unable to make it, so the commentary tends to focus on the visuals and how they were achieved. Since it is a low-budget film, there's plenty of info about how they made things happen, and there's a bit more energy this time, as the former housemates joke around a bit. For technical info and a visual point of view, this track is a good choice.

A trio of featurettes, which can be played separately, or all together, give plenty of back story for both Capote the man and Capote the film. "Truman Capote: Answered Prayers" (6:43) focuses on the writer, talking about his life, achievements and struggles, utilizing interviews with Hoffman, Miller, Kimmel and Capote biographer Gerald Clarke, and footage and pictures of the man himself. For the uninitiated, it's an appreciated primer.

The other two featurettes are the first and second parts of a 35-minute behind-the-scenes look at the film. "Making Capote: Concept to Script" (17:13) takes the viewer into the pre-production effort, through on-set photos and interviews with many of the film's creative forces, while "Making Capote: Defining a Style" (18:25) covers the techniques and efforts that gave the film its unique look and feel. Together they do the rare trick of actually giving proper respect to the art of film, instead of the glamour and spectacle. If anything, this DVD is devoid of fluff.

The disc wraps up with a boatload of previews, including Friends with Money, The Three Burials of Melquiades Estrada, The Memory of a Killer, Thumbsucker, Junebug, Saraband, The Passenger, Breakfast on Pluto, The White Countess, Cache, Where the Truth Lies, The Patriot: Extended Cut and The Dying Gaul. Of course, since this is Sony, there's not trailer for the film that's actually on the disc. 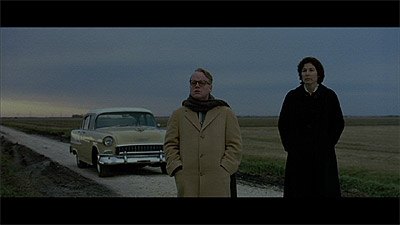 The Bottom Line
A quiet film about an unusual man, Capote excels as a character study of human internal conflict. As portrayed by Hoffman, Capote is an incredibly complex man, a character who is neither hero nor villain. He is, instead, one of the finest depictions of a writer ever to be seen on-screen, avoiding the pitfalls inherent in making a movie about a man as unique as Capote. He's helped by Miller's deft hand as director, as his conservative style sets the tone and atmosphere before turning his actors loose on such great material.

The DVD does not drop the ball, delivering a beautiful-looking transfer, with excellent sound, and some very appropriate and informative bonus features. Like the movie, the disc doesn't try to overdo it, and as a result, it succeeds.