"You know what the first rule of flying is?... Love. You can learn all the math in the 'verse, but you take a boat in the air that you don't love, she'll shake you off just as sure as the turn of the worlds. Love keeps her in the air when she ought to fall down, tells you she's hurting before she keens. Makes her a home."

The Movie:
You've got to give him credit for this: Joss Whedon does not take easily to failure. When his script for a movie titled Buffy the Vampire Slayer was mishandled by the studio and an incompetent director who turned it into a forgettable comedy spoof, Whedon resurrected the concept as an extremely popular and critically acclaimed TV series that ran for seven years and spawned an equally successful spin-off series. That kind of faith, determination, and yes love are rare and valuable traits in Hollywood. When he attempted to launch a new science fiction franchise under the title Firefly, he had nearly the opposite journey. Starting with a TV series that the Fox network ungraciously cancelled after just 11 episodes, most of them aired out of their proper order and context, Whedon's unbridled love for the project eventually brought it back to life as the feature film Serenity, a heavily-promoted big screen release from Universal Studios in the Fall of 2005. Unfortunately, despite strong reviews and fawning devotion from the TV show's small (very small) fan base, the movie was a tremendous box office flop. I doubt he's quite given up on it yet, but even Joss Whedon will have trouble turning this one around.

Its financial failure shouldn't be taken as any sort of indication of the movie's quality. In fact, the tiny handful of people who actually saw it in the theater mostly liked it. Picking up a few months after the point where the TV series ended (or just stopped, really, since there wasn't any sort of proper ending), the movie brings us back into the adventures of charming scoundrel Capt. Malcolm Reynolds and his ragtag band of rebels as they carouse through outer space like old fashioned Western outlaws, always on the run from the oppressive Alliance authorities. Still harboring the fugitive Dr. Simon Tam and his mysterious, mentally unbalanced sister River, the crew of the ship Serenity must now face a new threat, a relentless Alliance agent known only as The Operative, whose pursuit will finally drive them to discover the dark secrets held in River's scrambled brain.

Opening with a short prologue sequence that recaps the bare essentials of the concept and then immediately jumping ahead past the end of the TV series, the movie is adeptly structured to function equally well for viewers who've seen the show and those who haven't. Knowledge of the series will help to flesh out some of the character development, but it really isn't essential to follow the plot. Unfortunately, this was probably the weak point in Universal's marketing campaign. Lacking any major stars (when Chiwetel Ejiofor is the biggest name in your cast, you've got a tough sell ahead), the movie was pushed heavily on Whedon's reputation alone, and clearly the trailers and TV spots didn't appeal to anyone other than existing Firefly fans, who were just not a large enough group to make the film a financial success.

To be honest, I had mixed feelings about Firefly when it aired, and most of those carried over to the Serenity movie. As a huge fan of Whedon's Buffy and Angel TV series, I had high hopes for Firefly but wound up feeling that its uneasy mix of sci-fi and Western genres was a little undercooked. Maybe it just needed time to grow (Whedon's strength is in long-form storytelling), but at the time it was cancelled I didn't miss it all that much. Giving it a second chance, I thought the show played a lot better on DVD than on broadcast. I liked the characters and dialogue, yet I still never felt it was the groundbreaking masterwork that will forever change the direction of science fiction the way many of its ardent fans (so-called "Browncoats") did. By the same token, I liked the Serenity movie but just wasn't overwhelmed by it. It has a nice mix of humor, action, and deeper character moments, but plays more like a very good TV series finale than like a true feature film. That certainly didn't help its theatrical prospects, though I have to admit that it's nice to finally bring some closure to the storylines left hanging in the series. I can't think of anything specific that I disliked or wish had been handled differently, but I just didn't love the movie, and I really wanted to. 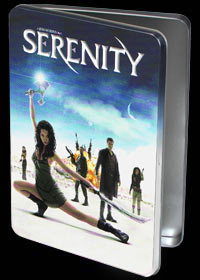 Available in the United States as a decent single-disc DVD with a handful of bonus features, Serenity gets a more elaborate Double Disc Edition from Universal Home Video in Australia. Australian retailer EzyDVD also offered the movie in a (now out of print) limited edition tin.

The tin holds a standard keepcase inside. Both use the movie's international poster art, which is a little less awful than the PhotoShop montage found on the Region 1 DVD case, but makes the movie look like a cheesy low-budget '80s fantasy picture, perhaps a sequel to Ice Pirates or Krull. I'm not overly fond of either artwork, honestly.

Disc 1 of the Double Disc Edition is coded for playback in Regions 2 or 4, both in the PAL video format, and Disc 2 is coded for Region 4 only. Either will require compatible hardware to operate.

Video:
The transfer on the Australian disc seems to be sourced from the same video master used for the Region 1 DVD, with a small increase in resolution due to the PAL formatting. The movie is presented in its theatrical aspect ratio of approximately 2.35:1 with anamorphic enhancement. The picture is reasonably sharp and has no edge enhancement artifacts, but fine object detail looks filtered. I happened to catch a High Definition version of the movie's trailer played as part of Toshiba's HD-DVD demonstration; that disc looked significantly better than the DVD, which is to be expected, but even by DVD standards Serenity doesn't quite push as much from the format as is possible. Minor compression problems such as color banding and noisy grain are also occasionally visible, but never severe enough to be objectionable.

The biggest problem with the Serenity transfer is that it's just too damn dark. The movie has intentionally contrasty photography, and mention is made in the audio commentary of a couple of shots where the actors were deliberately underlit, but even so the transfer goes too far. Bright outdoor scenes look fine, but dark scenes (and there are many) have poor shadow detail and visibility. I don't remember the movie looking this murky in the theater.

Audio:
Bass junkies take note: the LFE in this Dolby Digital 5.1 track will shake the foundation of your house. This disc has deep, deep bass and highly aggressive surround activity. It's exactly what you want from a sci-fi adventure movie.

PAL speedup on the Australian DVD is unfortunately noticeable in the actors' voices, however.

The audio and subtitle options are different on Disc 2. The supplements found there are available in English, French, or Dutch 2.0 audio, with subtitles in those same language options.

Extras:
The DVD begins with an obnoxious anti-piracy commercial that's unskippable but can be fast-forwarded past. When will the studios learn that people who pay for their DVDs don't need to be lectured about piracy, and real pirates don't care?

The bonus features on Disc 1 of the Double Disc Edition are mostly identical to the Region 1 DVD release. The 4-minute Joss Whedon Introduction was filmed for one of the movie's advance test screenings and lets the director explain his passion for the project. The highlight of the disc, as expected, is the audio commentary by Whedon. Fans of his previous works know how good Whedon's commentaries are, and this is no exception. Topics covered include his Mission Statement for the film and how his vision of the future was conceptualized. The talk is technical at times but never boring.

Six minutes of outtakes feature lots of cursing by the cast. Eleven deleted scenes with optional commentary run 15 minutes. Many of them are scene extensions rather than whole new scenes. Much footage of Inara was excised from the film. A few of these scenes would have worked had they been retained.

Following this are several featurettes. Future History: The Story of Earth That Was is a 5-minute recap of the Firefly TV series backstory. What's in a Firefly is a 7-minute look at the visual effects. The 10-minute Re-Lighting the Firefly talks about how a cancelled TV series could spawn a feature film, and lavishes much praise on the fan-base for supporting the project.

The Fruity Oaty Good Time easter egg from the Region 1 DVD is here as well, found by pressing Left from the "Play" option on the main menu and selecting the highlighted triangle on the right-hand side of the screen. This thing really defies description, but is strangely addictive.

Not found in Region 1 is the 20-minute A Filmmaker's Journey, which spends most of its time showing how happy everyone was to be working together again. The remaining new features are all found on Disc 2. The bulk of that disc is dedicated to the 55-minute Question and Answer Session that was taped after the advance screening in Sydney, Australia. Whedon is very gracious and witty, and answers just about any question the fans could think to ask him, until one of them requests that he do the Dance of Joy. At this early stage prior to the movie's release there was much hope for a sequel, which clearly will never happen now.

Four new extended scenes are presented in anamorphic widescreen; they show us some footage that was mentioned in Whedon's audio commentary but not seen on Disc 1. The Take a Walk on Serenity featurette is a 4-minute tour of the set, and is reminiscent of a similar feature in the Firefly DVD box set. Finally, a 3-minute piece called The Green Clan focuses on cinematographer Jack Green.

Final Thoughts:
When Firefly got lousy ratings and was cancelled after just 11 episodes, it seemed like the end of the road. Somehow, through Joss Whedon's perseverance, it was reborn as a feature film… that bombed. Its biggest fans proclaimed that it would be a Star Wars franchise killer, but the movie's theatrical grosses didn't even cover its modest $40 million budget. Some of those fans are still holding out hope for a sequel, but I honestly can't imagine that will ever happen. That the movie exists in the first place is something of a miracle. We should be happy that the major story threads from the series were finally resolved, and leave it at that. Do we really need to ask for more?

Although I didn't love Serenity as much as I'd hoped, the movie is still a fine, very entertaining sci-fi adventure. For most viewers, the Region 1 DVD should suffice, but bigger fans will want to seek out the international release which has more bonus features and different packaging, and comes recommended.