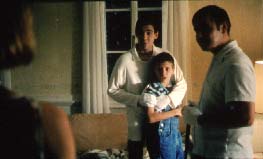 Somewhere in Austria…Upon arrival at their enormously big lake-house Georg (Ulrich Muhe) and his son Schorschi (Stefan Clapczynski) quickly roll up sleeves and begin work on a newly-purchased boat. Anna (Sussanne Lohtar), Georg's wife, heads to the kitchen to prepare the family's favorite meal. Shortly after a well-groomed man wearing a pair of white gloves appears asking if he could borrow a few eggs. The man is soon joined by a second "visitor" who reveals a most unusual affection towards Georg's high-end golf clubs. The two men then insist on playing a few of their favorite "funny games". For Anna, Georg, and Schorschi this should have been the perfect weekend getaway!

Austrian director Michael Haneke and his controversial film Funny Games were highly decorated with a Palm d'Or nomination during the Cannes Film Festival in 1997 where this enormously violent piece of cinema shocked both critics and regular filmgoers with its realistic depiction of sadism. The suggestive manner in which the story was filmed created a chilling effect amongst those who saw it and eventually Michael Haneke evolved into one of Europe's most talked about film directors.

It wasn't Funny Games however that launched Haneke's cult status amongst those who follow closely the art-house scene. It was the Austrian director's equally violent and in my opinion even more impressive Benny's Video (1992) about a boy obsessed with watching gruesome films. Benny's Video immediately created a name for Haneke and ever since most every one of his works has been meticulously scrutinized by film buffs around the world.

What makes a Haneke film worth watching is without a doubt the unique style this talented director has mastered. In Funny Games it is the pure intensity of the storytelling that makes the difference. The violence, a major aspect of this film, is off the camera and we hardly see it. But we most certainly hear it!! It is almost as if Haneke wanted those that will see the film to feel equally abused by succumbing to their worst fears. Indeed Funny Games proves the old maxima that the greatest horror-director is our own imagination.

Above everything else however it is the ability of the director to control the action in Funny Games that transformed this film into one of his most talked-about works. Take for example the scene where Schorschi is shot by his captors. Instead of hysteric screams and chaos what the viewers witness is silence! The main protagonists hardly even move! What we see, hear, and feel is human devastation!!

Similar to Danish director Lars Von Trier and his provocative body of works (Dogville) Michael Haneke has been one of Hollywood's most outspoken critics. He has expressed an opinion that what American cinema glorifies in its films is a direct product of a culture accustomed to violence and abuse. In fact in Europe Funny Games was initially seen as a litmus test attempting to measure violence and its acceptance amongst filmgoers. At the same time the film also wanted to focus on the alarming presence of violence in cinema by exacerbating most every aspect of it, the target of this populist move of course being Hollywood and its film industry where violence is often prepackaged with plenty of glamour.

More than six months ago a massive boxset containing some of Michael Haneke's early films (including the now notorious Benny's Video) was released in France but unfortunately for those needing English subs the collection did not offer such. Shortly after KINO Video announced their plans to release the same films in R1 land. So, what I have in my hands is the first disc of the collection and I have to (regretfully) announce that this is indeed a direct, improperly converted, copy of the French release with added English subtitles. The transfers from the boxset for all of the Haneke upcoming R1 releases (which I will have reviews for shortly) are identical to the French versions which is not necessarily a bad thing, quite the opposite in fact, but in a well familiar fashion KINO have simply performed a direct PAL-NTSC port of Funny Games and as a result there is a good dose of "ghosting" to be seen. Aside from that from color gradation to contrast everything else in this release appears exactly the same as the French version of Funny Games. The print herein provided is in very good condition and there is simply no basis for comparison between the old Koch Lorber disc and this new French-ported version. Unfortunately no matter how good it looks it still remains a PAL-NTSC port and all of the issues that come with such a transfer are quite visibly represented here. Funny Games is presented in its original aspect ratio of 1.85:1 and enhanced for widescreen TV's.

Presented with a Dolby Digital German track and optional English subtitles Funny Games sounds very good. The sound is crisp and clear and dialogue is very easy to follow. It would have been great if we were offered the 5.1 German track but nevertheless considering that with a few exceptions this is mostly a dialog-structured film the presentation is more than adequate.

Aside from a generic filmography and the theatrical trailer this DVD also offers the same interview with Haneke that could be found on the French disc. In it the director talks about violence and its presence in the media, the manner in which violence is being "advertised", and consequently its impact on viewers. Quite a fascinating piece of extra indeed which is one of the highest points in this KINO presentation.

I am most certainly disappointed that KINO continue to release such mediocre PAL-ports of just about any film that happens to come from overseas. Quite frankly I would have thought that had KINO "copied" the same French set (ok, why not put all of these films in a box also) BUT provided the needed proper transfers they (KINO) would have sold quite a big number of them. Haneke's early films are nowhere to be found in an English-friendly form so in my opinion this would have been the perfect occasion to compliment what I believe to be the best film of last year: CACHE.
Instead, once again a truly important film is granted a DVD treatment which at the dawn of the HD era simply looks quite a bit off! My advice: if looking for the best version of Funny Games wait for the upcoming SE edition announced in the UK.