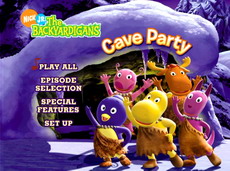 As far as i'm concerned, I grew up during the "golden age" of children's television. There was the Muppets (and Jim Henson), Fat Albert, the Electric Company, Zoom (the early years) and (most importantly) Mr. Rogers. Children today have a wider variety of programming available to them thanks to channels like Noggin, PBS Kids and Nickelodeon but unfortunately, the majority of these shows seem more concerned with commercialization than education.

With a watchful eye, I usually try to stay on top of the programs my kids watch. As soon as my son and daughter were born, I started inundating them with Time-Life's Muppet Show DVD series (now on Buena Vista), classic Disney and other shows I grew up with. In addition, I also let them watch "approved" new shows like Clifford - the Big Red Dog, Arthur, Between the Lions and Reading Rainbow. But he and his sister were the ones that introduced me to the Backyardigans (well, though their mother). One day I walked into the kids' bedroom to find them singing and dancing along to the song "Secret Agent" from a Backyardigans promo CD Nickelodeon handed out. Since I also believe good music should be a part of my their life, I decided to catch a few episodes to make sure it was suitable for them. Well, i'm happy to report that it was, and i'm sure your kids will like it too.

In case you're not familiar with the five precocious preschoolers that make up the Backyardigans, they are: Tyrone - an orange moose, Austin - a purple kangaroo, Tasha - a yellow hippo and Pablo - a blue penguin. There's also Uniqua who, judging by her antenne, looks like she could be an insect of some sort. Every episode begins in their backyard, before their youthful imaginations take them from the frozen north to the Nile in Egypt to Sri Lanka. Cave Party contains a total of four episodes:

I'm not the biggest fan of computer generated animation, but the 3-D CGI used for the Backyardigans is very fluid and the colors are very vibrant. In addition to the impressive animation, the Backyardigans also have another thing in its favor - its music. Each episode of the Backyardigans features a different genre of music. Evan Laurie, one of the founding members of a jazz group called the Lounge Lizards, writes the music for the show and the songs are terribly catchy. From the Calypso in "Cave Party" to the Bossa Nova of "Castaways", you'll find yourself humming along no matter how many times you might be forced to watch.

Video: The Backyardigans - Cave Party is a single-sided DVD with a full-frame aspect ratio of 1.33:1. The picture quality is sharp and bright, which help to bring out the extremely vibrant color palate.

Audio: The 2.0 Dolby Digital audio track was adequate for the dialogue on the disc, but I found myself wishing it had been 5.1 to punch up some of the music featured in the episodes. It's also a shame Paramount didn't throw on some subtitles for the lyrics to the songs. And since Nelvana, a Canadian animation house, is responsible for the animation, there's also a French track included. 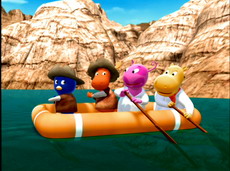 Supplements: Paramount "subtitles are special features" Home Video was responsible for this release, so the "special" features are a "music video" for the song "Go Go Go" (which is featured in Race Around the World), the "Full Screen Format" and the "English and French Dolby Digital Stereo" tracks. Those who are familiar with previous Paramount releases know i'm not making this up. Oh, and for those who were wondering: the "special features" are not rated.

Conclusion: The Backyardigans: Cave Party will keep your kids entertained with the bright, vibrant colors and affable characters. In fact, after repeated viewings (you DO realize kids like watching things more than once, right?) you might find yourself singing along. Besides the enjoyable (and varied) music score, the character voices (both spoken and singing) and the impressive visual presentation, this disc gets a hearty recommendation.