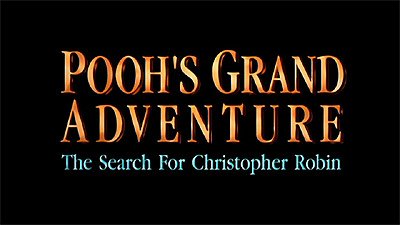 
The Movie
Sitting in front of the TV with my two-week-old daughter, watching a Winnie the Pooh movie seemed like the right way to spend an hour or so. She fell asleep a few minutes in, but I ventured on while she napped, and found that it was probably better for her to keep her eyes closed. While it's unlikely that she would even focus on the screen, it was still a bit too scary for a baby.

It's been almost nine years since this film graced movie screens, which means it's more in line with the original Pooh Bear, than the bastardized version that awaits us in 2007. Despite that, this is not classic Pooh, as the voices have changed in some cases, and that Disney-sensibility has infiltrated what was a very simple concept. Even so, parents should find that most young ones will want to spend some time with their favorite hunny-loving bear.

A precursor to the perils of growing up seen in Toy Story 2, the story sees Christopher Robin heading off to school after a summer spent playing with Pooh and pals. Christopher Robin has trouble explaining to Pooh that they won't be able to play all day anymore, so he leaves a note telling him that he's going to school. Unfortunately, Owl reads it as "Skull" and the gang thinks he's in trouble, so they set off to rescue him. 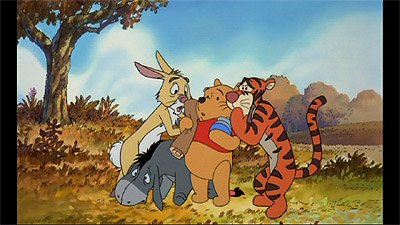 The movie flies through its 76 minutes, as the storyline takes Pooh and company to parts of the Hundred Acre Woods that are rarely seen, parts that are full of thorns and scary unseen creatures like the Skullasaurus. They have to overcome their fears to keep going, and with a bit of luck they may make it through a treacherous cave and find not only Christopher Robin, but Pooh too, who suddenly disappears.

The look of the movie harkens back to the original Pooh cartoons, with animation that has the detail of storybook drawings, but with a fluidness that's very modern. The quality of the animation is very high, especially during the cave scenes, which are full of detail and action. There's a lot to like about the creativity in this movie, which gives the older people in the room something to enjoy when the story gets a bit too cute.

The DVD
The disc is packaged in a white keepcase, with an insert that has DVD info and a chapter listing, and a cute illustrated booklet that tells the film's story. According to the packaging, the booklet will only be available for a limited time. The DVD features Disney's FastPlay startup tech, and an animated anamorphic widescreen main menu that offers options to play the film, select scenes, adjust languages, check out extras and view previews. Language options include English 5.1 and French and Spanish 2.0 tracks, along with English SDH subtitles. The scene-selection menus have still previews and titles for each chapter. 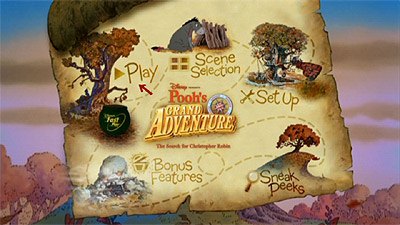 The Quality
Impressively, this kids movie is presented with a beautiful anamorphic widescreen 1.66:1 transfer that features, for the most part, vivid colors and a crisp image. The film was given a thorough clean-up as part of the film's restoration, and the results are obvious, though some minor dirt is still evident in spots. Considering this is not exactly a cherished classic, it's something of a pleasant surprise that Disney has given this movie such an appropriate presentation, instead of throwing a watered-down "family friendly" full-frame version on the market.

Aurally, the DVD also fares well, with a solid new Dolby Digital 5.1 track that's got the kind of subtle touches a film fan appreciates, like atmospheric sound effects to the sides and rear. The dialogue is clean and clear, while the music gets a decent enhancement through the surrounds. Winnie the Pooh might not be the first thing you think of when you plunk down the cash for your receiver, but the disc doesn't let your system go entirely to waste.

The Extras
A trio of bonus features make up the supplements on this disc, with only the "Pooh and Friends: Adventures in the Hundred Acre Woods" game aimed purely at kids. A six-part set-top activity, it could mean a few more moments of entertainment for the little ones, but it will bore the adults in the room, despite the rather difficult Tigger portion.

"Pooh's Symphony," a six-minute featurette on the film's music, is actually a great piece for younger DVD watchers, as it explains much about movie music in very simple terms. Think of it as a starter extra.

The real gem here is the Oscar-winning 1968 short, Winnie the Pooh and the Blustery Day. Anyone who remembers Pooh fondly from their childhood will be able to reconnect through this 25-minute piece of the past. The imagination seen in this cartoon is wonderful, as the storybook concept is brought to life, and integrated into a sweet story of Winnie the Pooh and friends. It's in pretty good shape considering its age, though the live-action bookends show some damage. 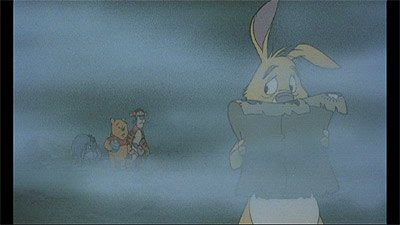 The Bottom Line
While still honoring the character's animated past, this film pumps up the traditional Pooh story by throwing in a healthy dose of adventure. The film might be a bit frightening to small viewers, but it may appeal to a wider audience because of that. The DVD presentation is very nice, with a selection of extras that may not be large, but is certainly appreciated and interested. Region 1 Pooh fans should be happy to finally have this movie on DVD and in nice shape, though parents might want to exercise caution in showing it to the very young.