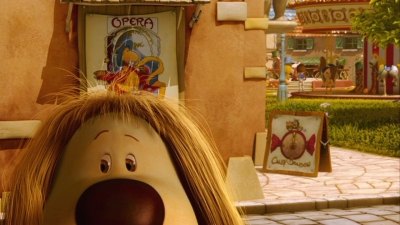 It's hard to know where to start with Doogal (2006), a hastily thrown together American "remake" of a computer animated kids film from France (and, in turn, a book by Serge Danot) featuring bad jokes, generic characters, a dull story and…well, I stand corrected: it's hard to know where to finish. Standing tall at #31 on the Internet Movie Database's esteemed "Bottom 100" list (as voted by the general public) with a dismal 5% approval rating on the movie critic index site "Rotten Tomatoes", I'm obviously not alone in thinking that Doogal isn't exactly what you'd call a "successful project". Box office sales (or lack thereof) should never be an accurate scale of a film's artistic merit (or lack thereof), but Doogal's dismal $7M earnings at least reminds us that lazy work can go unrewarded.

How's that for a moral, kids?

OK, let's keep this short and sweet. Doogal is, after all, one of the worst excuses for a children's film during this or any year---and if you're really looking for an in-depth analysis of why it's so awful, you don't have to look hard. Filled to the brim with pop culture references and other such gags that'll be even less funny a few years from now, it's like Shrek without the occasional bit of charm and surprise. The story, which centers around four friends / unlikely heroes (Doogal, a candy-loving "dog"; along with Dylan, Brian and Ermitrude) who set out to grab three mystical diamonds before the evil wizard Zeebad uses them to freeze the sun, is pedestrian at best. The aforementioned pop culture references bog down the dialogue, offering shout-outs to MC Hammer, Dr. Phil and those "Whasssup!" commercials. Sigh. 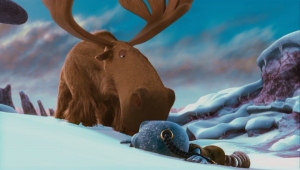 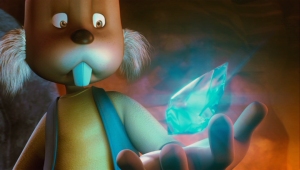 The generic character designs are bad enough, but the re-dubbed voices (in which an ensemble American cast---including Whoopi Goldberg, Chevy Chase, Jon Steward, Kevin Smith and others---largely replaces the original voice actors) don't really match up at all; of course, they're hoping the kids won't notice. To make a long story short, Doogal makes Garfield: The Movie look like Toy Story in comparison. Those looking for a better alternative for the kids are better off renting…well, just about anything else. Surprisingly enough, witnessing the mediocrity of Doogal firsthand has me itching to see The Magic Roundabout, if only to see how bad of a hack job this really is.

If, by some tiny chance, you or your kids saw Doogal in theaters and actually enjoyed it (*shudder*), The Weinstein Company has made certain even you won't be blown away by the subsequent DVD release. The technical presentation is very good, though there's very little else on board here. Overall, Doogal is hollow, short-sighted fodder aimed directly at children…so if you really care about what they're watching, steer clear of this mess.

Frustratingly enough, the technical presentation is actually quite good here. Presented in its original 1.78:1 anamorphic widescreen format (with a 1.33:1 pan-and-scan presentation on the flip side), Doogal looks clean, bright and colorful. Digital problems (edge enhancement, etc.) don't seem to be an issue, rounding out the visual presentation nicely. The original 5.1 Dolby Digital Surround mix sounds very clear, offering crisp dialogue and music, as well as a mildly strong atmosphere from start to finish. Optional English and Spanish subtitles are offered during the main feature only. 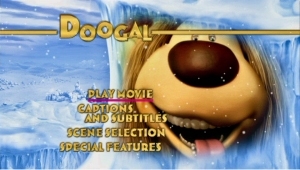 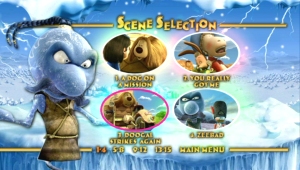 Seen above, the menu designs for this release are fairly dull but easy to navigate. This 85-minute film has been divided into 15 chapters, while no layer change was detected during playback. The packaging is very straightforward, as this one-disc release is housed in a standard keepcase with a matching slipcover and promotional inserts.

Bonus Features
Not surprisingly, there's not a lot of effort put forth here---and it may be wishful thinking, but I'd have actually liked to see a few on-screen comparisons to the original film. The only bonus features included here are a bland, mildly promotional Behind-the-Scenes Featurette (which plays out more like an electronic press kit) and the film's original Theatrical Trailer. These extras are presented in the same fashion on both sides of the DVD.
Final Thoughts

Overall, there's not much else to say about Doogal: basically, it's an awful film paired with a great technical presentation…and, well, that's about it. The actress Helen Hayes once said, "Childhood is a short season", so don't bother wasting 90 minutes of your kids' lives with this stinker. Skip It.