Boondocks: The Complete First Season (Uncut and Uncensored), The 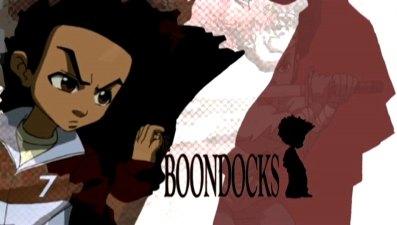 They say there's no such thing as bad publicity...and they're probably right, because Aaron McGruder's The Boondocks isn't the first series to enjoy success with the help of good old-fashioned controversy. Originally created as a comic strip for The Diamondback (the University of Maryland's independent student newspaper) in 1997, The Boondocks soon made its way to the pages of The Source, finally receiving a distribution deal with Universal Press Syndicate in 1999. Its history in the funny pages has been successful but rocky; not surprisingly, many newspapers have dropped the strip due to complaints from angry readers. Nonetheless, The Boondocks remained a popular enough entry to be developed into an animated series, with the television and film rights quickly snapped up by Sony.

Premiering as part of the Cartoon Network's "Adult Swim" animation block in November 2005, the show has been where most new fans of The Boondocks have jumped on board...because as the title of its first strip collection in 2000 suggests, "I Know You Don't Read the Newspaper". This animated series, of course, allows the ideas and characters of McGruder more breathing room; after all, the three-panel format isn't that large of a canvas to begin with.

The Freemans, a black family from Chicago recently relocated to the suburban sprawl of Woodcrest, Maryland, remain the main focus of The Boondocks. Huey (a ten year-old named after a co-founder of the Black Panthers) and Riley (an eight year-old disciple of the mainstream rap "image") are two brothers that couldn't be any more different in their ideas and opinions, while "Granddad" Robert Freeman holds down the fort with old-fashioned discipline. Supporting characters include neighbors Tom Dubois (a rich black lawyer with a white wife, Sarah, and interracial daughter, Jazmine) Uncle Ruckus (a self-hating black man, named after Joel Harris' "Uncle Remus" character) and the Wuncler family (including Ed Sr., a rich realtor, and his ex-soldier grandson)...and, of course, plenty more. You'd have a hard time finding a more colorful cast of characters than The Boondocks, but this is only one of the show's highlights.

Of course, no animated series could be successful without strong voice acting and a distinct visual style, and it's here where The Boondocks still manages to pass with flying colors. The artwork is heavily influenced by anime, due in no small part to McGruder's love for the genre, so it's no surprise to see a few well-known anime-related touches scattered around---including, but not limited to, several familiar faces lurking in the background during a few episodes (happy hunting!). In the voice acting department, actress Regina King pulls double duty as Huey and Riley Freeman, with other notable characters represented by John Witherspoon (as Granddad), Cedric Yarbrough (as Tom Dubois), Gary Anthony Williams (as Uncle Ruckus), Ed Asner (as Ed Wuncler, Sr), Charlie Murphy (as Ed Wuncler, III) and Samuel L. Jackson (as Gin Rummy, Ed III's best friend). Guest voices for this season include John DiMaggio (of Futurama fame), Adam West, Mos Def, Quincy Jones, Judge Reinhold and Xzibit. Collect 'em all! 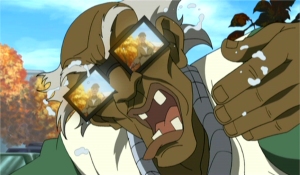 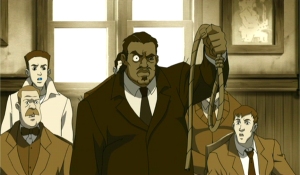 Below, you'll find a brief recap of the first fifteen episodes of The Boondocks, which ran from November 2005 to March 2006. As a whole, this first collection of adventures is a lot like most premiere seasons of promising new shows: slightly uneven, but peppered with moments of brilliance. Here's a quick rundown of what's included:

1. "The Garden Party" - Huey and Riley embarrass Granddad at a snooty gala in their new neighborhood. *
2. "The Trial of Robert Kelly" - The infamous R&B singer's legal proceedings take a detour in Woodcrest,
stirring up the spirited opinions of young Huey and Riley while drumming up plenty of local protest. *
3. "Guess Hoe's Coming to Dinner" - Granddad invites a "lovely" young woman over for the evening.
4. "Granddad's Fight" - A heated argument between Granddad and a blind driver turns ugly fast. * ^
5. "Date With the Health Inspector" - Tom Dubois is arrested for matching the description of "The X-Box Killer".


6. "The Story of Gangstalicious" - Riley pays his favorite rapper a visit at the local hospital. *
7. "A Huey Freeman Christmas" - Huey directs a controversial play for the school's Christmas program.
8. "The Real" - Huey is tailed by a government agent after Riley pulls a fast one.
9. "Return of the King" - In one of the better Boondocks outings thus far, Martin Luther King Jr. awakens
from a 32-year coma and is publicly demonized for his peaceful responses to recent terrorist attacks. * ^
10. "The Itis" - Granddad's soul food restaurant business leads to health problems in Woodcrest.


11. "Let's Nab Oprah" - Huey aims to stop Riley and a few brats from kidnapping the talk show hostess.
12. "Riley Wuz Here" - Riley's graffiti habit goes too far, so a veteran art teacher decides to intervene.
13. "Wingmen" - After a friend's death, Granddad and Huey deal with the past during a trip back home.
14. "The Block is Hot" - Taking a page from Spike Lee's Do the Right Thing, Jazmine sets up a drink
stand during an unusually hot February day. Capitalism ensues, courtesy of the ruthless Ed Wuncler III.
15. "The Passion of Rev. Ruckus" - Ruckus spreads the word of White Jesus. Huey tries to save an inmate. 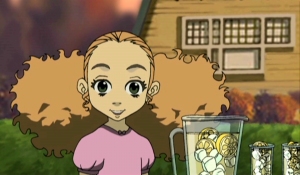 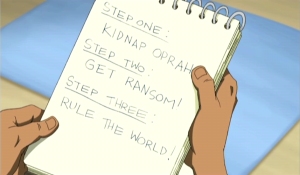 If there's one thing that will stand out to first-time viewers---aside from the heavy language and subject matter, of course---it's that The Boondocks really has its finger on the pulse of what passes for pop culture these days. Like South Park, it keeps things fresh by dissecting current events and sticking them right in our face. Episodes like "Return of the King" came under fire by the likes of Al Sharpton, who didn't approve of the late Dr. King's use of "the n-word". Other episodes, like "Granddad's Fight", remind us that conflict may (or may not) always be avoidable. There are plenty of gems scattered throughout, sprinkled with well-placed pop culture references that don't weigh down or dominate their respective episodes. It's a potent formula that works fairly well, right from the start.

The Boondocks, on its best day, offers sharp-eyed parody that really hits the mark. It stumbles a bit early on, often trying a bit too hard and upping the shock value more than it really needs to. This first season eventually finds a balance between the two extremes---and although you'd never describe the show as anything lighter than "heavy-handed", it's perhaps most successful when it's a true caricature of those who watch it. Overall, those who like to see the melting pot stirred up will find The Boondocks to be a breath of fresh air.

The strip is currently on a six-month hiatus and due to return in October, while the animated series will (hopefully) begin its new season around that date as well. Those new to The Boondocks should certainly watch a few reruns on the Cartoon Network before diving in, though: this three-disc DVD collection presents the episodes uncut, removing bothersome bleeps, blurs and the like. As far as "uncut and uncensored", though, this doesn't look to be 100% accurate: a few occasional blurs were still spotted, and the scene removed from Episode #2 (involving Rosa Parks, which aired right around the time of her death) is only available as a bonus feature. In any case, you'll still hear plenty of f-bombs, n-words and the occasional glimpse of full-frontal male nudity...but hey, it's all in good fun.

Presented in its original 1.78:1 anamorphic widescreen aspect ratio and enhanced for anamorphic displays, The Boondocks boasts a strong color palette and a clean, slick appearance overall. Unfortunately, a few episodes suffered from mild ghosting every few frames; this is a problem that plagues many animation DVDs, but it only seems to affect a few episodes (for a screen capture displaying this problem, click here). Other than this eyesore, which may not be evident on non-progressive setups, The Boondocks looks good and should please fans of the series.

Likewise, the 2.0 Dolby Digital Stereo mix is clean and clear, boasting a strong atmosphere that suits the dialogue-driven show well. The music plays an important part in many episodes, so it's good to know it comes through strong as well. Odd that a more dynamic mix wasn't attempted, but what's here gets the job done. Optional French subtitles are included for the episodes, which Closed Captioning is also provided. 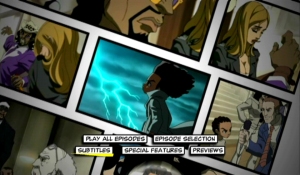 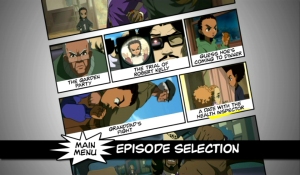 Suited to the series' atmosphere and style, the menu designs (seen above) offer a clean layout and easy navigation. Each 22-minute episode has been divided into roughly five chapter breaks, while no obvious layer changes were detected during playback. The packaging is especially nice, as this three-disc set is housed in a trio of clear slim cases with character-themed artwork (featuring Huey, Riley and Granddad) and also include basic episode summaries. The slim cases are, in turn, housed inside a slipcover and bundled with a handful of boring promotional inserts.

Bonus Features:
Scattered throughout the first two discs are seven full-length Episode Commentaries; as mentioned above, most are audio (and sometimes video) tracks featuring Aaron McGruder and the Boondocks crew, while a pair of commentaries are left in the capable hands of fan favorite Uncle Ruckus. The former are obviously a bit more content-heavy, full of interesting tidbits and plenty of goofing around. Ruckus' commentaries, on the other hand, are a bit more sporadic but still worth a listen. I'd have loved to hear a few thoughts from the creator and cast during episodes like "The Block is Hot" and especially "A Huey Freeman Christmas", as slightly more than half the season is left unaccounted for. Even so, there are a few other key extras on board that fans of The Boondocks should really enjoy. 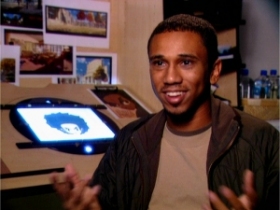 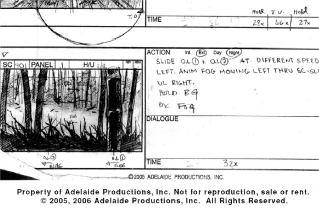 The remainder of the bonus features are found exclusively on Disc 1; first, there's a fairly basic Behind-the-Scenes Featurette (20:14, above left) featuring Aaron McGruder and a few of the voice actors. The creator is fairly low-key but obviously passionate about his work---and though this featurette is a bit too clip-heavy to really dig deep, it adds a solid layer of insight to the series. Next up are a trio of Deleted Scenes ("Rosa Parks and the Flying Chicken Leg", "Granddad's Daydream" and "Scare Nigga", 3:42 total); they're presented in anamorphic widescreen and look just as good as the episodes themselves. Also here is a rough-looking Animatics Slideshow (9:31), as well an interesting series of Unaired Adult Swim Promos (3:34 total). Rounding out the extras is an interesting collection of Printable Storyboards (above right) presented as a DVD-ROM supplement in .PDF format, plus a handful of loosely-related Sony Previews. Overall, it's a fine mix of bonus features that supports the first season well.

If you've enjoyed any or all of The Boondocks since its premiere, there's no reason why you shouldn't enjoy this collection. Like most other television shows---especially those in the comedy genre---it suffers a few missteps early on, but several moments of near-brilliance outweigh the occasional rough patches. Here's hoping that it continues to grow in the right areas (like South Park, for example) instead of wearing out its welcome; raw and uncompromising, The Boondocks offers more than simple shock value and shouldn't be ignored. The three-disc set from Sony offers a decent technical presentation and plenty of extras, making this one worth hunting down. Firmly Recommended.