3rd Rock from the Sun: The Best Episodes in the Universe, Really 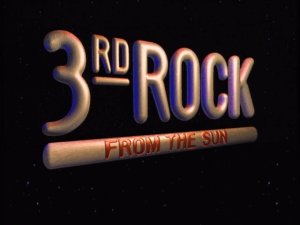 The Best of Release

3rd Rock From the Sun is one of the richest and hilarious television comedies to air. The series first aired in 1996 and lasted for a total of six seasons. The show molds science fiction into a sitcom and the results are a blast. A team of aliens from Mars take on human form in Rutherford, Ohio and integrate themselves into the local populace. Their goal is to learn everything they can about humans in a couple of days. Of course, it turns out humans are much more complex than expected and the team of aliens decide to stay a while longer. The strongest aspect of this show is its cast. They are remarkable together. Within minutes of any episode, it is apparent how well they interact and play off of each other. The show's writing is also top notch and delivers one great joke after another. For more details about this series and its cast, please refer to DVD Talk's reviews of season one, season two, season three, season four.

This particular review covers the best of release, a compilation of four hilarious episodes from the show's six season run. The episodes include "Brains And Eggs" and "Dick Like Me" from season one, "Dick And Taxes" from season four, and "The Fifth Solomon" from season five. There are no extras or additional content included with the episodes. The DVD comes with the four episodes and nothing more. Not even the episode TV promos or menus with episode overviews (both found on the DVD releases). In other words, if you have been collecting the full season sets on DVD, than this best of release is not worth your money. However, if you happen to be a casual viewer (or newcomer) who is not interested in investing in the full season sets, then this best of release contains some fine episodes for you to watch. 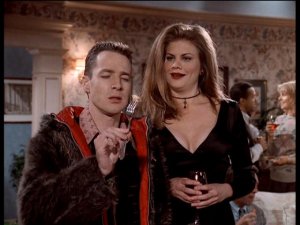 The first episode "Brains And Egg" is the series pilot episode from season one. It is an important episode because it features when the Solomon's first appeared in Rutherford, Ohio. The characters are introduced and the hilarious tone is set for the remainder of the season. The next episode "Dick Like Me" is also from season one. It is a pretty remarkable episode that covers racial diversity. It tackles such a serious issue in a fun light hearted manner. Dick believes you can pick your ethnicity at will. Under such an assumption, the Solomon's try out just about every ethnicity possible and their attempts aren't well received, but it should still make you laugh.

The third episode in this best of set is "Dick And Taxes" from season four. In this hilarious episode, the Solomon's learn they have to pay income tax. And when Dick takes sound tax filing advice from Mary, he goes over the top and decides the United States government owes him money, a lot of money. Surprise, the IRS conducts a tax audit on the Solomon's and they fear their true identity might come into the picture. The final episode in this set is "The Fifth Solomon" from season five. In this episode the Solomon's learn all about auto insurance when Dick wrecks the Rambler. It is a fun episode and something we've all had to deal with (car accidents). Of course, we've never seen it the way the Solomon's have.

Overall, I thought this compilation had some fun episodes the series. I, of course, would have picked some different episodes for the best of release such as the two-part Super Bowl episode "36! 24! 36! Dick!" or the two-part episode "Fun With Dick And Janet" that guest starred the infamous Roseanne Barr. Still, the episodes in this set should appease the casual viewer (or newcomer) looking to see hilarious television at its best. 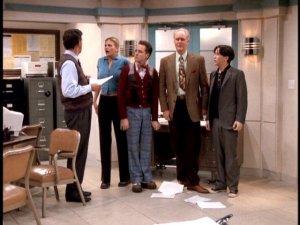 
Video:
The video format is given in its original aspect ratio 1.33:1 full frame color. The overall quality is fairly good. There are some noticeable of compression artifacts and ghosting during heavy movement. In addition there is also a slight roughness in the picture as a result of edge enhancement. As for colors, the picture tends to represent them well. However darker tones tend to highlight the picture's imperfections. Overall, while not outstanding, the visual representation is still quite good.

Final Thoughts:
3rd Rock From the Sun is one of my favorite sitcoms. The cast is insanely fun together and they manage to turn some of the most common, dull daily situations into a riot. This best of release may not have what I consider to be the best episodes from the series, but it still does a fine job representing how fun the show is. This set is great for casual viewers and newcomers alike. And again, if you own the full season sets, there is no new content.