Beyond the Valley of the Dolls

When executives at Fox found out that an independent filmmaker named Russ Meyer grossed over six million dollars with Vixen, a film he made for roughly seventy five thousand dollars, all of a sudden they started paying attention to the man who had made a name for himself in the early sixties with The Immoral Mister Teas. Meyer was signed to a three picture deal with Fox, who gave him a budget of a million dollars per picture – not much by big studio standards, but a massive sum to someone used to working with budgets under a hundred grand or, more often than not, under fifty grand! Though the third film would never materialize and the second film, the poorly received The Seven Minutes failed to find the audience studio execs and Meyer himself had hoped for, the first picture Meyer made for the studio, Beyond The Valley Of The Dolls, was definitely a success. 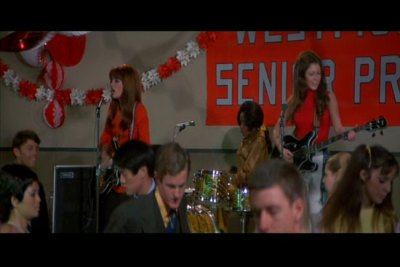 In 1967 Fox had scored big with an unintentionally hilarious adaptation of Jacqueline Susann's novel Valley Of The Dolls starring Sharon Tate, Barbara Perkins, Patty Duke and Lee Grant and Meyer's first project was originally intended to be a sequel to that film. The finished product, however, really had nothing to do with the first movie at all, though a young scriptwriter named Roger Ebert did very definitely use the themes of that movie as inspiration for the script that Meyer coerced him into writing. Instead what Meyer delivered to the studio was a tightly edited and almost surreal blend of sex, drugs, and rock 'n' roll filtered through his own strange personal vision. As much a horror movie as a comedy with musical numbers, the story of a three piece female rock group named The Carrie Nations quickly developed a cult following that, like the ones surrounding many of Meyer's other films, remains strong and loyal to this very day. The film went on to inspire filmmakers and musicians alike and before Meyer tragically passed away in 2004 he was noted to have chosen this film as the work that he was the most proud of. 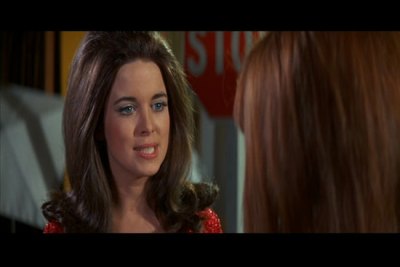 The MPAA famously slapped Meyer's film with an X-rating and while this wasn't something that the director himself was unfamiliar with, having had similar decisions made against some of this other films including the aforementioned Vixen, Fox was not particularly impressed. Regardless, they put the film in theaters anyway (something that happens very rarely these days), and the rest is movie history.

So what's the movie about? In the interests of keeping this review spoiler free, the synopsis will be on the brief side but at its core the film revolves around three pretty young girls named Kelly McNamara (Playboy Playmate Dolly Read), Casey Anderson (Playboy Playmate Cynthia Myers) and Petronella Danforth (Marcia McBroom who would later show up in a few blaxploition movies including The Legend Of Nigger Charlie and Willie Dynamite) who make up a three piece rock band called The Carrie Nations. These girls think they've got what it takes to make it in the music industry and so off they go to Hollywood where they hope to get lucky and fine fame and fortune. 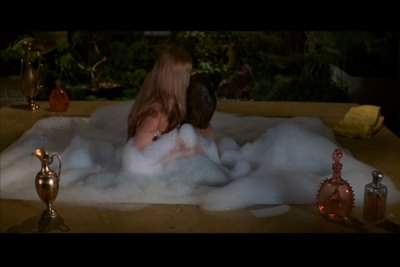 Kelly's got an inheritance to claim while they're out in L.A., and once that's taken care of they soon meet up with a compelling recording industry mogul named Ronnie 'Z-Man' Barzell (John La Zar who Meyer would use again in Supervixens). Once they hook up with him, things start to change and fast. The world of sex, drugs and perversion is laid at their feet and when they slowly but surely begin to partake of this forbidden fruit, tragedy soon follows. Through Z-Man they make acquaintances with an adult film starlet named Ashley St. Ives (Edy Williams), a lesbian predator named Roxanne (Erica Gavin of Meyer's earlier Vixen), and a crooked lawyer named Porter Hall (Duncan McLeod of Meyer's 1968 Finders Keepers, Lovers Weepers), all three of whom will have an impact on the lives of our three young musicians, but not necessarily in the way that everyone thinks.. 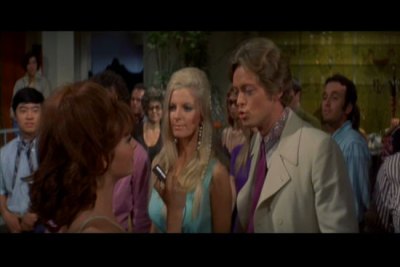 With the firepower of Fox Studios behind him, Meyer was able to craft such a slick and tight looking movie that audiences in 1970 really didn't know what to make of the film. A major studio, the same studio that had put out so many classic films over the decades and throughout the history of Hollywood, had released an X rated film chock full of sex, violence, and completely subversive humor. The film went on to bring in very healthy box office returns, so the studio in that regard was happy with the results but again, no one quite new what to do with Meyer or his art. That's part of the beauty of Beyond The Valley Of The Dolls, however. It's very much an enigma of a film – it's too dark to really be a comedy and it's too funny really be a horror movie and while it does have enough music in it, it's not really a musical either. It simply is what it is, and there's never been another movie like it. 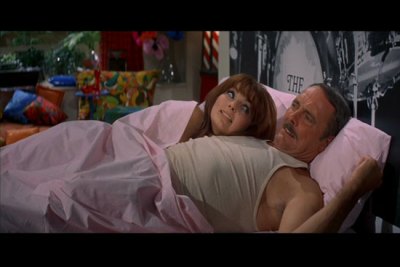 Meyer was used to working with casts of relative unknowns and while some of the people in this film had been around a little while, Edy Williams most notably, none of them really qualified as star material – so much the better in Meyer's mind. He was of the belief that if the movie was good enough that people would come to see it even if there weren't A-list names attached to the cast and more often than not when it came to his own work he was right. It's a well-known fact that Meyer was a 'breast man' and would always cast girls with big chests in his film. While this movie doesn't go as far in that department as later films like Beneath The Valley Of The Ultra-Vixens or the deliriously tit filled Mondo Topless, the three lead actresses are stacked where it counts and make for some pretty tasty eye candy, as does Erica Gavin. Look for a young Pam Grier to turn up in a supporting role, and Haji from Faster, Pussycat… Kill! Kill! turns up briefly as well. He liked to fill his films with the kind of women that he liked to look at, and he was unashamed of his tastes as is evident in pretty much all of his work.

There are some fun casting choices with the male performers as well. Charles Napier, best known for his appearances alongside Sylvester Stallone in the Rambo movies is fun as Baxter Wolfe, while Michael Blodgett of Through The Looking Glass does a fine job as the dashing Lance Rocke. Harrison Page, who Meyer cast for the first time in Vixen is excellent as the noble Emerson Thorne and his love scene with Marcia McBroom is one of the stand out moments from the film – it's passionate, it's believable, and it's steamy. The highlight of the cast, however, male or female, has got to be John La Zar, who is absolutely fantastic in his over the top and completely Shakespearian performance as Z-Man. Ebert and Meyer have said that the character of Z-Man is based on Phil Spector, though neither of them had met him before, so in reality he's based on what they guessed Spector would be like. Spector has been in the press a fair bit in recent times as a suspect in the murder of the late Lana Clarkson, b-movie actress from Deathstalker. Not only does Z-Man have some of the best and most memorable lines in the film but he also steals the show at the end, playing a huge part in the surprise finale and completely throwing himself into the part, overacting be damned. 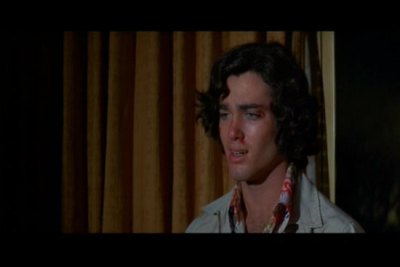 Of course, no review of the film would be complete without mentioning the music. Songs like 'Look Up From The Bottom' and the title theme have gone on to hold their own special place in the heart of pop culture enthusiasts, and most of the credit for that has to go to Stu Phillips who worked on so many of the songs that play such an important part in the film. Sixties pop group The Strawberry Alarm Clock also have a small appearance in the movie, in which they perform what is probably their best known song, 'Incense And Peppermints.' The music is catchy, it's recognizable, and it suits the completely fictionalized and utterly unrealistic look at the music scene of the day that is Beyond The Valley Of The Dolls. The three female leads are all lip-synching, they didn't do their own vocals for the film but for the most part you'd be hard pressed to tell as they really did do a pretty solid job of making everything look authentic in part from Phillips' involvement and in part through Meyer's clever post production and editing tricks – either way, it works (just try to tune out the horns that are in the song but aren't on screen during one number!). 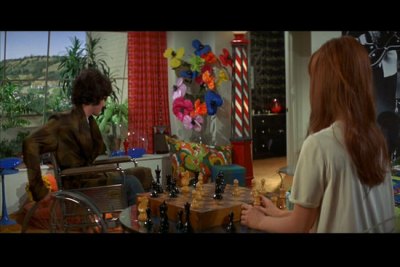 Beyond The Valley Of The Dolls is one of those rare films where everything just came together. Whether it was Meyer's lucky day or the stars were aligned just right or however you want to justify it, the movie stands the test of time as a true classic, a big budget big studio drive-in movie with all the class and style you'd expect from a Hollywood production of the time and all the sex and violence that Meyer's body of work was known for crammed into one fantastic package. It's fun, it's frightening, it's sexy and it's one hundred percent pure entertainment.

Beyond The Valley Of The Dolls hits DVD in an excellent brand new 2.35.1 anamorphic widescreen transfer that looks fantastic – almost perfect, really. Sure, there is some grain present in a few spots and if you look really carefully you might even see some mild print damage present in a couple of scenes in the form of the odd speck here (but you're really going to have to strain your eyes to see them) and there but other than that, the image looks great. Edge enhancement and aliasing are never problematic (there are one or two instances of noticeable line shimmering but that's about it) and mpeg compression artifacts are virtually non-existent. Color reproduction looks dead on and black levels remain strong and deep throughout the duration of the film. Both foreground and background detail is strong and even during darker moments the image always remains very clean and very clear. Skin tones look lifelike and natural and the picture stays sharp from start to finish. The transfer is very film like and very natural looking without a lot of obvious digital enhancement or the like. Anyone who has seen the film projected should be impressed with the job that Fox has done here, as it really does capture the look of the movie pretty much perfectly. 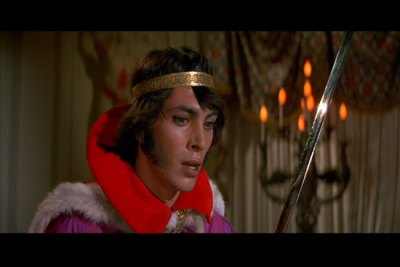