Quick and the Dead / Bite the Bullet, The 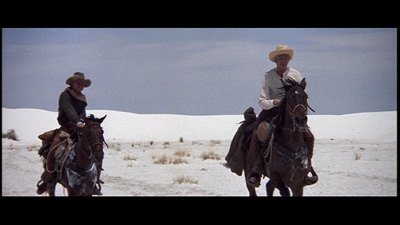 A packaging of two western films starring Gene Hackman from two different periods of his career. This is more than just a bundle of two previously released DVDs wrapped together, but a whole new product--each film put into a slim plastic case and slid into a cardboard box.

* Bite the Bullet (1975): Written and directed by Richard Brooks (The Professionals), this movie is the story of a 700-mile cross-country horse race. At the front of the pack are Luke Matthews (James Coburn), a former Roughrider and a professional gambler; Miss Jones (Candice Bergen), a former prostitute with ulterior motives; and Sam Clayton (Gene Hackman). Clayton was a soldier alongside Matthews, but he has since gotten more in line with some of the later political sensitivities of the 20th century. He's a compassionate sort, who despises cruelty to animals, women, and the little man. His presence has a calming effect on the others, because out of everyone, he's the one who really walks it like he talks it. Initially, he even refuses to join the race, as it seems ridiculous to him; it's only when the boorish behavior of some of the other participants and hangers-on puts his nose out of joint that Clayton signs on. The race takes them through all manner of dangerous terrain, from deep rivers to expansive deserts, and as the environment takes the other racers--the older man going for his last shot of glory (Ben Johnson), the upper-crust Brit (Ian Bannen), and the hot-headed wannabe (Jan-Michael Vincent)--Clayton gets proved a little more right.

Which is not to say that this film is at all cloying. Bite the Bullet moves at its own comfortable amble, not getting caught up in the deconstruction the western genre went through in the '60s and '70s. The characters are well-written, and the friendship between Coburn and Hackman makes me wish the two actors had appeared on screen together more. The film has some genuine thrills, including an incredible use of slow motion in a scene where Coburn overtakes Jan-Michael Vincent. Brooks uses some kind of imperceptible splitscreen or other equally subtle effect to have one horse move in slow motion while the other moves at normal speed, emphasizing just how fast Coburn is moving.

Bite the Bullet only falters at the very end, clipping the moments before the finish of the race deeper than they should've been. Still, the ultimate climax brings everything together well, and it's easy to ignore that Brooks rushed us a little to get there.

* The Quick and the Dead (1995): This Sam Raimi genre buster is pure value entertainment. High on thrills and style, Raimi brings his swooping camerawork to play in a small-town named Redemption, where the iron-fisted "mayor," John Herod (Hackman), is holding a contest to find the quickest draw. Fourteen men--including Herod's son, "The Kid" (Leonardo DiCaprio)--and one woman sign up, while a sixteenth man is forced into the competition, a preacher by the name of Cort (Russell Crowe, looking young and fresh-faced). It turns out that Cort was once Herod's pillaging partner, and Herod doesn't like the fact that he's turned his back on outlaw life. The contest is designed to force the killer in him to re-emerge. The woman, Ellen (Sharon Stone), has more than glory on her mind, as well. Her father (Gary Sinise) had been the Marshall of Redemption, and Herod killed him.

The Quick and the Dead has a more cynical edge than Bite the Bullet. There is no humanitarian message. Rather, it's an out-and-out shoot-'em-up, stocked with an excellent cast. The film was shot while both DiCaprio and Crowe were still a film or two away from their biggest hits, and both already display the charisma that ultimately put them ahead of the competition. Hackman is a menacing villain, beginning the film cocksure in his evil but masterfully letting the cracks show as the tide turns against him. Stone is the only actor I was ready to dismiss, as she seems so unconvincing playing tough. Only when I stopped looking at her as Sharon Stone trying to convince me she was tough and looked at her as the character Ellen doing the same thing did I realize how well Stone was actually playing it. Vindication is had for both the actress and her role when Ellen is ultimately transformed into the fighter she needs to be.

Of course, the real star is Raimi's camera, which darts around the action as a frenzied spectator. There are a couple of truly memorable images of the effects of violence that are both nasty and gleefully grotesque. It's the zip of the direction that puts this rather basic story over the top, making it fun regardless of how many times you watch it. 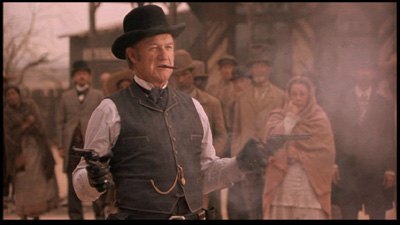 So, two good movies coupled in one box, but the fact that they are both entertaining doesn't really answer the big question: Why these particular movies? What compelled Sony to put Bite the Bullet and The Quick and the Dead together? Well, the most obvious answer is that Gene Hackman is in both of them, and they are both westerns. It's great to see Hackman playing two disparate parts on two sides of his career--as a younger man playing a more socially conscious cowboy searching for peace, and as an older man playing the villain who serves his own needs. How is it that he is so damn likable in both? If they named both characters Sam Clayton, I'd forgive the cowboy for throwing out his ideals and becoming the bad guy, because he'd still be Gene freakin' Hackman!

Beyond that, there are other interesting surface parallels. Both films center on contests to prove who is the best, and they both feature female characters trying to buck the system while not being all that they seem. Back-to-back, Bite the Bullet and The Quick and the Dead end up working very well together. It turns out that what could have been a marketing ploy to grab for cash is actually more considered than that. The price point isn't much different than buying these films on their own, so you can still opt to go with one or the other, but if you're a western fan, give the double-shot version a try. 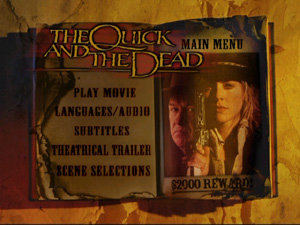 Video:
Both films are presented in anamorphic widescreen, mastered for high definition. The Quick and the Dead is done-up in its 1.85:1 aspect ration, and Bite the Bullet is really wide at 2.35:1. Both are extremely pretty transfers. Only once in Bite the Bullet did I see a weird fuzz; otherwise, both films are clean, befitting their cinematography. Raimi creates some incredible skies in The Quick and the Dead, using weather to punctuate emotional scenes. Brooks, on the other hand, makes the most of his big screen to show the wide open terrain his riders are traveling. They are less a part of the environment than they are guests in it.

Sound:
The Quick and the Dead gets the bigger treatment with a 2.0 and 5.1 mix, and it serves the film well. Raimi has as much fun with sound effects as he does visuals. There is also a French language version, and subtitles in both languages.

Bite the Bullet gets a clear but unspectacular digital mix and seven subtitle options.

Extras:
No bonus features to speak of, excepting the trailer on The Quick and the Dead. That film also has more fun with the menus. When you select the chapter you want, for instance, the image for the chapter shatters as if it's been shot.

FINAL THOUGHTS:
Recommended. Someone at Sony took the time to consider what might make a good Saturday matinee double feature, and that person deserves some kind of bonus for settling on these two Gene Hackman westerns. If you like cowboy movies, Hackman, or both, you can't go wrong with this twofer. Though the DVDs don't really get the red carpet as far as extras, Bite the Bullet and The Quick and the Dead provide solid entertainment from start to finish. 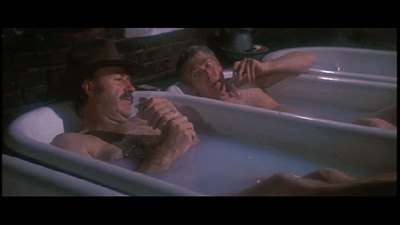