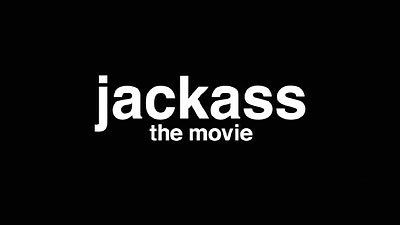 
The Story So Far...
Once upon a time, a bunch of skateboarding enthusiasts got together and found they shared a love of physically-damaging stunts and intensely aggressive practical jokes. So naturally, they decided to videotape their antics, and thus, the MTV series "Jackass" was born. Considering the show's huge popularity, it wasn't a stretch for them to take the series' flexible format and translate it into a feature-length film, free from the demands of television censors and the limitations of time and basic-cable money. The low-budget movie became a huge hit and has given birth to a sequel years later. Paramount released the film on a loaded DVD back in March of 2003, and DVDTalk has reviews by Aaron Beierle and G. Noel Gross.

The Movie
When you take a TV show that runs about 20 minutes and stretch it out to something close to the length of a feature film, you rarely end up with a movie that anyone wants to see. Of course, if the show has no plot, and is made up of random, unconnected segments, the chances of success increase, as seen in the case of Jackass the Movie. All it took was more scenes, more cursing and more male nudity, and you have a feature film that makes a ton of money and eventually spawns a sequel.

Freed from the restraints of MTV, the film could do what it wanted, which resulted in segments like the yellow snow cone and the infamous X-ray stunt, involving a toy car and an intimate body part. But for the most part, the show brings more of the same goofy students that made the series such a hit. That means a lot of crashing and a lot of gross-out moments, with some "Candid Camera"-like moments thrown in for good measure. Hey, if it worked on the small screen, no reason to change things for the big screen. You don't fix what's not broken. 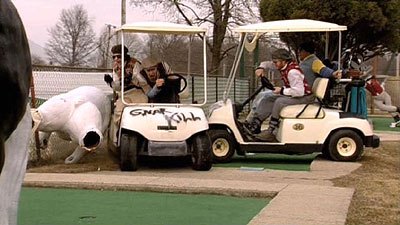 Though the same group stars in all Jackass productions, there's two different forces at work in the film (as well as the series.) One, personified by Johnny Knoxville, Steve-O and Chris Pontius, is about goofy fun and putting themselves at risk for a pay-off. The other, represented by Bam Margera and his boys, is mean-spirited and angry in its stunts. Personally, it's Knoxville's side that entertains me most, as I don't get off laughing at people. I'd rather laugh with them. When Bam sends Ryan Dunn hurtling to certain pain or attacks his stepfather Phil, it makes me cringe more than it makes me smile.

Of the 40 or so stunts shown in this movie, there are a few that stand out, either because of how unique they are or how involved the preparation is. Rent-a-Car Crash-Up Derby is ridiculously complicated, as Knoxville rents a car, outfits it for a bang-up and returns it as a wreck, while the simplicity of Golf Cart Antics helps sell the effect of the motorized madness. On the other hand, two segments do a nice job of combining the good-natured goofing and aggression. Night Pandas is silly and high-energy, as the costumed goofballs rampage around Tokyo, and Golf Course Airhorn shows up a couple of club-swinging blowhards.

This edition of Jackass the Movie is promoted as being "unrated," but as is usually the case with such marketing tricks, you'd be hard-pressed to figure out how the film is different than the original cut. The only noticeable changes involve the unblurring of some male nudity and some extensions during the x-ray finale. Once again, the idea of alternate cuts has been bastardized to sell another DVD to customers happy with the disc they already own. Eventually, this trend will run its course, and considering the decline in DVD sales, maybe its effect has already been felt.

The DVD Packed in a standard keepcase that's wrapped in a nice embossed, spot-varnished slipcover, the unrated edition of Jackass the Movie is a one-disc release, which features essentially the same menu design as the first DVD. The animated, anamorphic widescreen menu offers a choice to play the film, select scenes, adjust languages and view special features. Language options include English Dolby Digital 5.1 and 2.0 tracks, English subtitles and closed captioning. The scene selection menus have still previews and titles for each chapter. 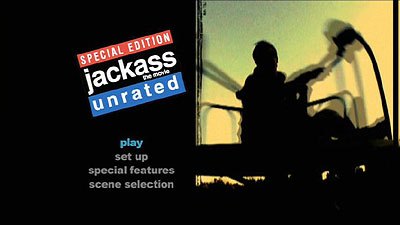 The Quality
With the exception of the opening and closing scenes, this was shot on the cheap on video. As a result, the image varies greatly from scene to scene, with color, detail level and sharpness changing frequently. Removing the quality of the source material from the equation, the anamorphic widescreen transfer is just about perfect. Some digital artifacts are seen in spots, but they seem to be a problem with the recording, rather than the presentation.

Though the audio is delivered in a Dolby Digital 5.1 track, the sound is, for the most part, rather pedestrian, which makes sense considering the low-budget,guerrilla style of filmmaking involved. Some moments of dynamic sound can be heard, especially in the beginning, but they are the exception and not the rule. The music and dialogue is pretty solid on the whole.

The Extras
The only new extras included on this DVD, aside from a free ticket to Jackass Number Two, are the teaser trailer for Jackass Number Two and a handful of "too hot for MTV" scenes that don't impress much. These range from cast members simply defecating to a staged beating to a recreation of one of the show's most disgusting segments. They have none of the humor that good Jackass bits have and aren't too exciting either. The only one mildly interesting sees Knoxville packed in a box and thrown down a flight of stairs, and that only works because of how dangerous it is. The clips run about 12 minutes, and can be watched all together or separately.

The rest of the bonus features are carried over from the first disc, starting with a pair of audio commentaries. First up are director Jeff Tremaine, cinematographer Dmitri Elyashkevich and Johnny Knoxville, in a track that provides plenty of behind-the-scenes info, delivered with the usual Jackass attitude and a friendly tone that makes for an entertaining listen. The second track features the main cast of the film, and is a commentary free-for-all, as one would expect from this group. Though they are able to keep the chat understandable, the commentary is all over the map, including important parts like stories from the set. It's an impressive job, considering how messy some of the commentaries are on the "Jackass" box set.

More info can be gleamed from "The Making of Jackass the Movie", a 24-minute special that aired on MTV to promote the film. It's a decent chance to go behind the cameras, Jackass-style. Thankfully, the usual fluff that goes into these featurettes is absent here, replaced by gags and interviews with the crew. It's followed by some healthy chunks of excised footage. Five minutes of outtakes, featuring various screw-ups by the cast, are presented, along with 27 minutes of deleted scenes. Among the highlights are the disturbing "Pocket Ass Return," involving a defective sex toy, and "The Failed Ending," which is partially seen in the credits. These can be watched individually or as a group.

What you don't get here that you did the first time around are the two music videos (both of which were pretty good), the poster concept gallery, the theatrical trailer, the nine MTV promos and the cast and crew biographies. Why they were removed is unclear, since they certainly didn't fill the space with anything worthwhile. 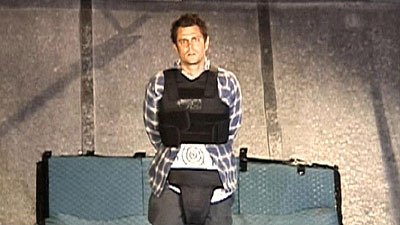 The Bottom Line
Jackass the Movie is a lot of fun, thanks in large part to the charisma of Johnny Knoxville and some out-there bits, but if you didn't like the series, this movie isn't likely to change your mind, as it's more of the same. This double-dip exists only to promote the release of the film's sequel, as it actually has less features than the original and very little reason to be called uncut. Anyone who already owns the original DVD has basically no reason to pick this edition up, and those who don't own this movie are better off picking up the heavily-discounted original release and seeing a matinee of the sequel.