Castle of Cagliostro - Special Edition, The 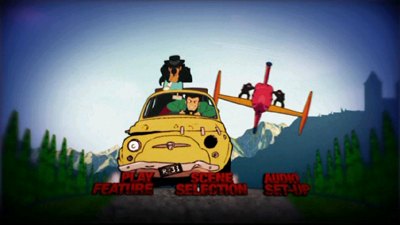 The Castle of Cagliostro is a classic of Japanese animation. Marking the feature film debut of writer/director Hayao Miyazaki (Spirited Away), it continued his highly regarded television adaptation of the much loved Monkey Punch manga Lupin III. Lupin is a gentleman thief with a weak spot for the ladies, and his light-hearted adventures had an international flavor that eventually garnered an international fanbase. As far as screen adaptations of the comic are concerned, this 1979 feature is easily the best. Manga Video originally released The Castle of Cagliostro on DVD back in 2000, and even though it wasn't the most elaborate of discs, the strength of the film was strong enough to earn DVDTalk's highest ranking back when it was first reviewed. Six years later, Manga has joined forces with Anchor Bay to put together a well-deserved Special Edition, and I'm happy to say they have upped the ante considerably.

As a movie, The Castle of Cagliostro has lost none of its punch over the decades. Miyazaki set out to make a high-speed adventure, and so there are few lulls between action sequences. The movie opens with a splash: Lupin (a.k.a. the Wolf) and his too-cool partner Jigen have just robbed a casino in Monaco, and security forces are in hot pursuit. After narrowly escaping, Lupin realizes that the money is counterfeit. The duo dumps the cash, but not before Lupin has an idea for a new heist: the castle in the European country of Cagliostro that is rumored to be the source for the fake currency. It's called the "Black Hole of Counterfeiting," because anyone who has gotten into the castle has never gotten out. 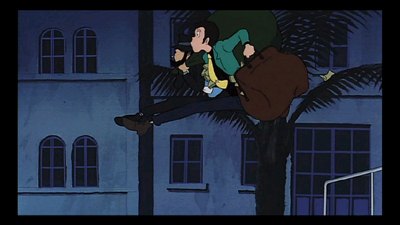 As if this weren't complicated enough for the two crooks, as they approach the castle they fall smack into the middle of another car chase. A woman in a bridal gown is on the run from some goons who are trying to take her back to the castle, where she is set to marry the sinister Grand Duke of Cagliostro. Lupin almost saves the girl, who it turns out is Cagliostro's Princess Clarisse, and she and Lupin have some sort of secret connection from their past. Rescuing her from the clutches of the Duke becomes an added wrinkle to his mission. He may be a rake, but he's a chivalrous rake who is more than willing to save a damsel in distress.

Miyazaki keeps Monkey Punch's colorful cast of characters intact. The stone-faced samurai Goemon joins the pair to help them infiltrate the fortress, which is good given that things will be all the more difficult now that Lupin's arch nemesis, Inspector Zenigata of Interpol, is on the scene, having picked up the Wolf's scent. Little does Lupin know, but his greatest rival and sometime lover, the buxom Fujiko, is also involved. In fact, she's a step or two ahead of him, already having infiltrated the castle.

The Castle of Cagliostro is a raucous good time. Action fans will love the multiple car chases, battles with assassins, and underwater shenanigans. There are even sequences where the thieves run across rooftops, leaping from castle spire to castle spire all the while being backtracked by a super jazzy, pre-lounge lounge score. Lupin is a devilish character who gets up to devilish schemes, wearing disguises and laying traps for his enemies. He's a Casanova who is more about the pursuit than the prize, and his wandering eye leads to more than his share of klutzy screw-ups. The ladies fall for him quite easily, and he's always ready to indulge in a little romance. If I were locked in a castle tower, I know I'd like to see him swoop down from an autogiro to take me to safety.

Such an excellent film deserves an excellent presentation, and The Castle of Cagliostro: Special Edition is just that. How much so? Well, let me tell you...

UPDATE: Since posting my review, an eagle-eyed reader pointed out to me that my faulty memory had skipped over the fact that the opening credits sequence has been altered for this DVD release. On the 2000 DVD, the sequence is intact, fully animated, with Japanese credits. Manga/Anchor Bay, at the request of the Japanese studio, have taken the same sequence and translated the credits into English, but instead of showing the animation in full, they have chosen one frame from each segment of the montage and frozen it, running the credits over static images. This is too bad, as it's a nice, moody intro to the movie, showing Lupin and Jigen on the road. While it won't hurt your viewing of the film overall, it is bad form to alter a movie in such a way and I'm tempted to knock my ranking down a notch. Be aware of this before you go and unload your older DVD. 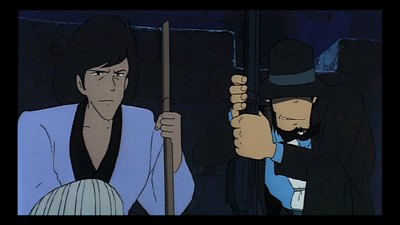 Video:
The Castle of Cagliostro: Special Edition has what looks to be a brand-new widescreen transfer, enhanced for 16X9 television sets. The older edition was not anamorphic, so there should be plenty rejoicing on that front. A random sample with two DVD players running simultaneously showed a distinct difference in colors. The older edition is more faded, while this 2006 release is far more vibrant. 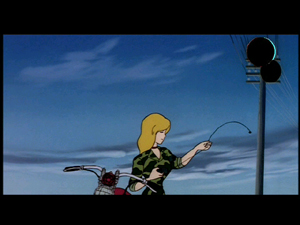 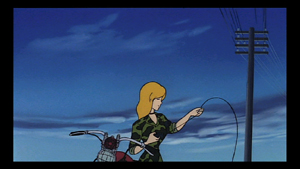 I got quite lucky on one of my sampled sections, shown in the picture of Fujiko above. I was watching chapter 9, and at about the 1 hour and 12 minute mark, looking at the 2000 DVD, I saw there was some stray dirt and other marks on the picture. I hit my splitter switch and went to the 2006 DVD to see the same scene on the new DVD. The marks are gone!

So, kudos to Anchor Bay and Manga Video for not resting on their laurels.

Sound:
While previously we only got basic mixes of both the Japanese language version and the English dub, this special edition offers several more options. The English dub is available in both 5.1 and 2.0 mixes, and there are also 2.0 language tracks in Spanish, French, and the original Japanese. I wish the Japanese track was given as much attention as the English, but the 2.0 mix is nothing to sneeze at. The quality of the sound is most noticeable when it comes to the score and the sound effects. The gunshots and the explosions have the right kind of bang to them, enhancing the thrills in the story.

The subtitles have also been redone and improved. They are done in a yellow font and are far less obtrusive than the older edition. I noticed a little rewriting when I was doing my comparison, too, some smoothing out and finessing of the text.

Extras:
The special edition of The Castle of Cagliostro is a flipper disc. The main feature appears on side A, and the bonus features are all on side B.

The most extensive bonus on side B is the entire film is shown in storyboard form. This has been a standard for Miyazaki/Studio Ghibli over the last several years, and it's an illuminating look at the design process. The only audio option for this feature is the Japanese language track, but there are English subtitles.

The other long extra is an interview with animation director Yasuo Ohtsuka, who worked under Miyazaki on The Castle of Cagliostro. He talks about how the film was made on an impossible 4 ½ month schedule, the influence of Mad Magazine cartoonist Mort Drucker on Monkey Punch, and the difference between the Japanese animation industry in the 1970s and today, among other things. This is joined by a gallery of production drawings and color stills. It's cool, but some of them are cropped a little too tightly. There is also the original Japanese trailer (it's strangely boring for a 2 minute ad for such an exciting film) and several trailers for other Manga Video DVDs.

FINAL THOUGHTS:
With a new transfer, a new subtitle translation, and plenty of extras, The Castle of Cagliostro: Special Edition remains firmly in the upper echelon of the DVDTalk Collector Series. If you already own the previous version, this is a time where you definitely want to go back in and upgrade. If you haven't seen The Castle of Cagliostro before, then what are you waiting for? There is no longer any excuse. Unless you don't like having fun, in which case I don't know what to tell you. 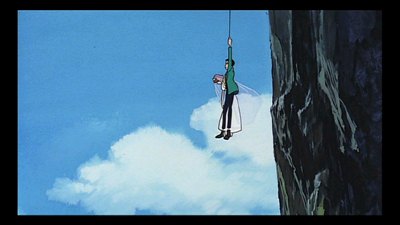