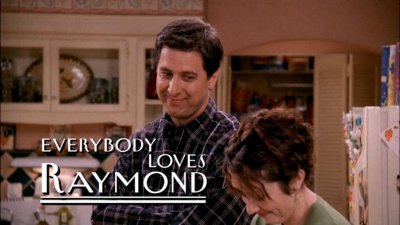 Everybody Loves Raymond is based on the work of stand-up comedian Raymond Romano. The series itself is basically about an oddly arranged family, which makes for a great sitcom. Romano plays Ray Barone, a not-so-typical sports writer, husband, and father of three. He happens to live across the street from his neurotic parents and just plain weird brother. His wife is Debra Barone (Patricia Heaton). In past reviews I have commented that she is not particularly funny on her own, but since season three I have noticed she has been getting quite a few good jokes in. The couple also has three kids, a girl Ally and twin boys Geoffrey and Michael. They have never really been a big part of the show, but this season has a few episodes about them. Of course, they all more or less lead back to Ray and Debra. The other characters include Ray's father Frank (Peter Boyle), a cheapskate who lacks a way with words. His straight to the point demeanor makes him a really unique guy. The funniest part about his role is his interaction with his wife Marie (Doris Roberts). The two have a love-hate relationship and are constantly ragging on each other. It's an extremely funny relationship. Finally, we have Robert (Brad Garrett). He's a police officer who has always lived in the shadow of Raymond. It's really fun to hear his sarcastic comments about how everybody loves Raymond. The added jealousy also makes for some great situations that should leave you laughing. Overall, the series has a strong cast, with each character bringing a fair amount to show. For more details about this series please refer to DVD Talk's reviews of season one, season two, season three, season four, season five, and season six.

In Everybody Loves Raymond's seventh season, there is one major storyline that made fans happy. Robert's journey for love finally comes to a conclusion when he decides happiness is with his former girlfriend Amy. This season includes a lot of storylines about their relationship with several reprised roles from her parents and odd brother Peter played by Chris Elliott, and ends with a wedding that can only happen when your mother is Marie Barone. Some of the season's other fun stories involve Marie and her bad eyesight, Robert joining a cult, Ray and Debra going to a marriage counselor, and Debra being arrested for drunk driving. In short, season seven is a blast and the developing storyline with Robert and Amy is one fans should not miss.

The season begins with the episode "The Cult". It is a great way to start the season and it touches upon a plotline developed in the previous season. By the close of season six, Debra and Marie were no longer speaking to each other. The tension, along with several other factors, pushed Robert over the edge. He finds salvation in a self-help group called the Innerpath, which he was introduced to by Cousin Gerard. When Robert tries to convert the family to Innerpath, they believe he is in a cult. Ray goes to a meeting with him hoping to get him to see the light. As it turns out, the Innerpath was using Robert to get to Ray. After Robert learns this, he loses all faith in the group. Robert and Ray use the situation to their advantage to repair Debra and Marie's crushed relationship. The episode has two fun storylines with some excellent performances from the cast. 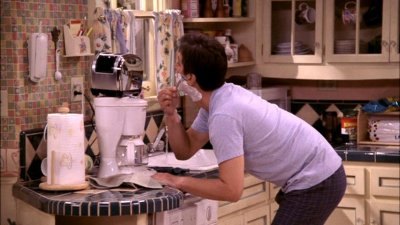 In the next episode "Counseling", Bernie and Linda come over for dinner and reveal they have been seeing a therapist. Debra decides going to a marriage counselor is a good idea and will improve her relationship with Ray. In their first session, Ray and Debra both try to manipulate the therapist to sympathize with their individual positions. Ray manages to get his "side" of the story out in a way that makes Debra look like the bad guy. Of course, the tension between Ray and Debra only get worse. Afterwards, Marie tries to patch things up between them and Ray makes a distributing statement about what kind of woman he wants. "Who Am I?" has Ray going through a slight mid-life crisis. Marie is shocked to learn that Ray and Debra are spending the evening doing different things. Debra goes to a book reading while Ray spends the night with his friends. Ray finds hanging out with the boys is not quite the same as it used to be. Debra is excited to learn Ray is finally maturing and the following week takes him to the book reading, which he does not enjoy either. Next Ray and Frank go to the lodge. Oddly enough, Ray finds hanging out with a bunch of senior citizens is to his liking. The story continues with everyone shocked that Ray wants to join his father's lodge. Meanwhile, Robert broods with jealousy he was not invited to spend quality time with dad.

"She's The One" is a great episode with a strong story about Robert. He meets a wonderful girl named Angela. She is absolutely gorgeous, a career driven lawyer, and very cultured. After a few dates, Robert believes she is the one. Ray and Debra have them over for dinner, as a way to get to know Robert's new girlfriend. At a first glance, Angela is a perfect. Ray, however, sees her eat a dead fly and when he tells everyone they think he's crazy. Robert even goes as far to accuse him of trying to sabotage his new relationship. Unfortunately, when Robert goes to Angela's apartment, he finds out Ray might just be right. There is certainly something odd about her. It is a great episode with Robert acting crazier than ever. In "Marie's Vision", the family is reluctant to confront Marie about her deteriorating vision. Debra on the other hand wants to do what is best for her. She convinces her to go to the optometrist and get glasses. With Marie's revived vision, she notices and nitpicks the family's "endearing" qualities. Ray ends up dying his hair with shoe polish, Debra puts on way too much eye make-up, and Robert gets a botox injection. It is a silly episode and also marks the return of Amy in Robert's life.

"The Thought That Counts" is the Christmas holiday episode. It starts off with the celebration of Marie's birthday, which Ray gets a tremendously thoughtful gift for her. It generates an uneasy tension with the entire family as Marie thinks it is too much and Frank and Robert feel minimized by the effort Ray put into the gift. Debra also loses her cool with Ray because he never puts as much thought into his gifts as he just did for his mother. Ray assures Debra he had a gift on par with Marie's. Of course, he doesn't and he turns to Robert for help. The situation makes the gift giving at Christmas a wild day with everyone getting mad at each other for their lack of thoughtfulness. It is a fun episode with Ray and Robert getting their feet stuck in their mouths. "Somebody Hates Raymond" is an episode where Ray's ego gets the best of him, again. Ray's goofy friend Andy is the new talent director for a national sports radio show. And when Andy tries to book Ray for the show, the host Jerry Musso (Steve Vinovich) refuses to have Ray as a guest. Despite Jerry and Ray never having met, he hates him. When Ray finds out, he goes stir crazy trying to find out why Jerry hates him. It is a fun adventure that puts a big smile on Robert's face. 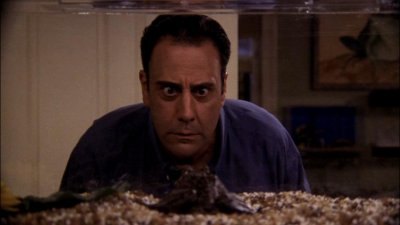 "Just A formality" has the season's biggest event, which turns into some great laughs with this neurotic family. Robert decides it is time to settle down with Amy and pop the question. Before asking Amy, he wants to get permission from the parents of the bride-to-be. Amy's parents, the McDougal's, are Hank (Fred Willard) and Pat (Georgia Engel). They are polar opposites of the Barone's, churchgoing fanatics. Their son Peter is played by Chris Elliot and he is one kooky fellah. When Robert asks for Amy's hand in marriage, he gets a quick no. This leads to a fun discussion with Ray, Marie, and Frank. The rest of the episode has some great moments which include Robert's proposal. In the next episode "Meeting The Parents", Hank, Pat, and Peter come to Amy's apartment to convince her to leave New York and come home to Pennsylvania. Coincidentally, the Barone's are coming over for Sunday brunch and the morning turns into an utter catastrophe as the two different families try to get along.

"The Plan" is another storyline dealing with Robert and Amy's pending wedding. Amy has put Robert in charge of the wedding invitations and he has no desire to participate in the planning. Ray and Frank offer advice based on their own experiences. If Robert messes something up badly, Amy will be forced to do all the work. They also confide that deep down women want to do all of the wedding planning. Robert then puts together some half-ass invitations, which are accidentally sent out. A furious storm with an angry Amy, Debra, and Marie follows. "The Shower" is a classic episode with Debra getting in over her head. At Amy's shower, Marie drives Debra crazy by undermining her efforts at the party. Debra leaves a little tipsy and unable to drive. She calls Ray to pick her up, but he never answers the phone. Debra falls asleep in the car and awakens to a police officer who arrests her for drunk driving. It is hilarious episode with Debra and Marie's odd relationship getting Debra in and out of a pickle.

"The Bachelor Party" is another story about Robert and Amy's upcoming wedding. As Robert's best man, Ray is supposed to put together the bachelor party. Ray's party consists of Gianni, a deck of cards, and a pizza. He failed to read between the lines when Robert said "don't make a big deal about it". With Ray's big screw up, Debra, Amy, and Marie band together to fix Robert an uneventful bachelor party with no strippers or alcohol. In the two-part season finale "Robert's Wedding", Robert and Amy tie the knot and their wedding is a fantastic adventure. There are some complications dealing with the Barone's and the McDougal's before, during, and after the wedding. The events are hilarious and it is one wedding you will never forget. 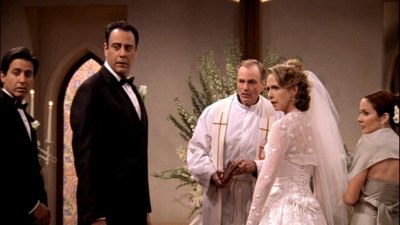 Overall, this season sees some strong episodes dealing with Robert and Amy rekindling their relationship, their engagement, and finally their wedding. In addition, the season includes some fun unrelated stories about the cast and more than enough riotous moments to keep you laughing and wanting more. Season seven is strong and it is something you do not want to miss. 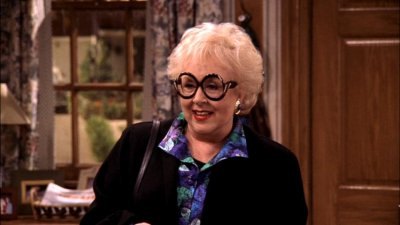 
Video:
Seasons of Everybody Loves Raymond prior to season four have come in full frame color. Since season four filming was shot for high-definition television and as such the video is given in anamorphic 1.78:1 widescreen color. The picture quality is quite good and looks much better than previous season sets. There are minor traces of grain and slight hints of edge enhancement. There is also some minor aliasing (not a lot, but still a few scenes with it). In general colors look right on. Overall it's a nice looking picture.

Audio:
The audio comes in the standard 2-channel Dolby digital stereo sound track with language options in English, Spanish, and French. The sound quality is good with distinct and clear dialogue. The track typically sounds a little flat, but that's expected with dialogue driven tracks. There is also little advantage of taken of the stereo setup, with little distinction between channels. This release also comes with subtitles in English, Spanish, and French.

For the deleted scenes, here list of the episodes they are associated with and brief descriptions of their contents: