Warner Bros. // PG-13 // September 26, 2006
List Price: $28.99 [Buy now and save at Amazon]
Review by Joshua Zyber | posted September 24, 2006 | E-mail the Author
The Movie:
Before I delve into the things that bother me about it, let me state up front that I think The Fugitive is a pretty good movie. Good, mind you, not great. It's a fairly entertaining thriller in which Harrison Ford does that "stoic Everyman who rises to the challenge of extraordinary circumstances" thing he's famous for to the best of his ability. The movie is a lean and efficient genre exercise with a reasonable amount of suspense, a couple of decent action scenes, and an amusing supporting performance from Tommy Lee Jones. It's a fun summer popcorn movie that does what it sets out to do. That said, it's also probably the most overrated B-movie in the history of American cinema.

Adapted from the classic TV series of the same name, The Fugitive had a difficult translation to the big screen. Quickly picked up as a star vehicle for Harrison Ford, the project went through several screenwriters and dozens of script drafts before finally rolling into production without a finished screenplay. The movie was shot in seat-of-their-pants fashion by a cast and crew frequently improvising scenes and hoping for the best. Frankly, you can tell. The story has several hugely improbable plot contrivances and a third act that's perfunctory at best. To its credit, it also has a loose and breezy vibe that keeps you entertained even as the plot grinds through its least interesting machinations. The picture was a big box office hit in the summer of 1993 and I don't begrudge it any of that success.

And yet, somehow The Fugitive is also regarded as a masterpiece of American filmmaking and the finest example of its genre. I'll be damned if I can figure out why. The movie was nominated for no less than seven Academy Awards, including Best Picture, and won a statue for Best Supporting Actor. Some of those nominations are downright bizarre. Michael Chapman's dreary, bland cinematography got a nod, as did James Newton Howard's utterly generic thriller-movie score. The nominations for Best Sound and Best Sound Effects Editing seem almost thrown out there in desperation by people who liked the movie and wanted to give it recognition for something, anything, whether it actually deserved it or not. Even as much fun as Tommy Lee Jones is as the take-no-guff U.S. Marshal on the trail of our hero, I'd be extremely generous to call his character two-dimensional. He's dedicated to his job, and he has a glibly sarcastic tongue, and that's basically all there is to his character. Is that really worthy of an Oscar?

At the 1994 Academy Awards ceremony, the nominees for Best Picture were: Schindler's List, The Remains of the Day, In the Name of the Father, The Piano, and…. The Fugitive? Seriously? How does that old Sesame Street song go?

Fine, the Academy wanted to make a concession to populist entertainment that year, but even to that end In the Line of Fire was a superior picture of the same sort (and I don't think it deserved any Oscars either). But what do I know? There are people who just utterly love this movie. When I attended film school in the early '90s, one of my stuffy film snob friends who usually turned his nose up at anything remotely popular declared it his favorite movie of all time. I guess I just don't get it. It hardly matters at this point, anyway. The movie was popular and acclaimed, and has proven to have legs over the years. It's a perennial favorite on cable TV and home video, and was one of the premiere titles to help launch the DVD format in 1997. So now here we have it again to pull the same duty for a brand new video format.

The Blu-ray:
The Fugitive debuts on the Blu-ray format courtesy of Warner Home Video. The studio previously released the film on HD DVD in May of this year.

Video:
The Fugitive Blu-ray is encoded on disc in High Definition 1080p format using VC-1 compression. The movie's theatrical 1.85:1 aspect ratio has been slightly opened up to fill a 16:9 frame with negligible impact to the composition.

Warner was eager to move away from the MPEG2 compression of previous Blu-ray releases to the more efficient VC-1 codec as soon as the necessary authoring tools were available, and this marks one of their first such releases. The disc is, in all respects that I could see, essentially identical in quality to their HD DVD release from earlier this year. Comparing the two discs side by side, I could not reliably tell them apart. All of the comments I made in my review of the HD DVD hold true here as well.

The movie has very bland cinematography, and that manifests itself with drab flesh tones and hazy black levels. Occasionally, a vivid color may pop up here or there (such as the green-dyed river during the St. Patrick's Day parade sequence), but the disc and movie have a generally dull appearance. There's a fair sense of fine object detail, especially in the fabric of the actors' clothes, and selected scenes show off the High Definition nicely, but the overall impression is akin to a better-than-average DVD.

Industry insiders have revealed that Warner used an older HD master for The Fugitive, originally transferred in 1080i format and only recently deinterlaced to 1080p in the studio. Unfortunately, at the time the master was struck, heavy vertical domain filtering was applied to reduce the appearance of aliasing and interlace artifacts on 1080i TVs. The process has the side effects of losing vertical resolution detail and introducing jagged artifacts and shimmer in diagonal lines when reassembled to 1080p or other progressive resolutions. It's still better than standard DVD, but not nearly as good as the best that High Definition can deliver.

As if that weren't upsetting enough, it appears that this was the transfer originally struck for the 1997 DVD release, even though the studio should have in its archives a newer master used for the 2001 Special Edition DVD. You can tell the difference by a production flub at time code 18:57 on the Blu-ray. After the train crash, there's a shot of the wreckage with a crew member's head briefly visible in the frame. That flub is present in the 1997 DVD, but was digitally erased for the 2001 DVD, yet appears again on the Blu-ray. 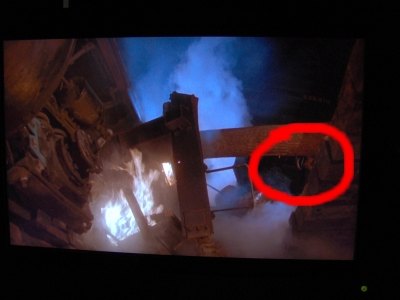 The bonus features on the disc (recycled from the Special Edition DVD) specifically mention this shot and discuss its removal for the then-new transfer. If Warner had used that newer master, they might have come up with a better-looking disc, though the movie will always be limited by its uninteresting visual design.

The Fugitive Blu-ray disc is not flagged with an Image Constraint Token and will play in full High Definition quality over a Blu-ray player's analog Component Video outputs.

Audio:
The movie's soundtrack is encoded in Dolby Digital 5.1 format at a high 640 kb/s bit-rate that is audibly the equal of the HD DVD's Dolby Digital Plus track.

The sound quality is about as undistinguished as the picture quality. It's adequate, but nothing to write home about. The clanging noises during the opening credits are very crisp, and musical fidelity is generally good. There are also some decent directional separation effects in the surround soundstage and a moderate amount of bass. Dialogue, however, can be muddy at times, and the big action set-pieces are usually disappointing. The train crash, for instance, is not particularly impressive. It's plenty rumbly, but the audio is a murky mass of noise without the clarity and finesse of the best soundtracks.

Extras:
All of the bonus features on this Blu-ray title are recycled from the DVD edition and are presented in Standard Definition video with MPEG2 compression. All of the supplements from the Special Edition DVD appear to have carried over, though honestly that doesn't amount to much.

Final Thoughts:
An entertaining if overrated thriller, The Fugitive makes less than impressive High Definition. The mediocre picture, sound, and supplements may be identical to the HD DVD released previously, but neither is much better than the comparable DVD edition. Still, if you like the movie this is probably the best presentation it's yet gotten, and for that it merits a mild recommendation on whichever HD format you prefer.