Everybody Loves Raymond: The Series Finale 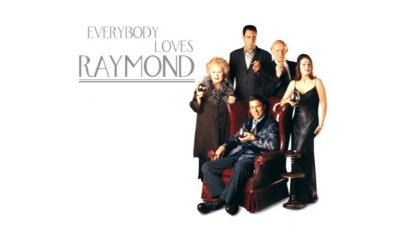 Everybody Loves Raymond is based on the work of stand-up comedian Raymond Romano. The series itself is basically about an oddly arranged family, which makes for a great sitcom. Romano plays Ray Barone, a not-so-typical sports writer, husband, and father of three. Ray and his wife Debra live across the street from his neurotic parents Frank and Marie, weird brother Robert and his wife Amy. The comedy revolves around the entire family acting goofy and turning some rather common situations into a riot. The actors and actresses deliver dialogue with talent and also incorporate physical comedy into the show with ease, which only adds to the hilarity. For more details about this series please refer to DVD Talk's reviews of season one, season two, season three, season four, season five, season six, and season seven.

This review covers the DVD release of the series finale. The episode rightfully entitled "Finale" marked the last episode of Everybody Loves Raymond and the end of a nine season run. "Finale" aired May 16, 2005 and it was released on DVD eight days later on May 24, 2005. Along with "Finale", this DVD includes the series pilot episode "Pilot". Having both episodes on one DVD gives viewers a chance to see what the show as like in the beginning and the end. Unfortunately, beyond the two episodes, there is nothing else.

The episode "Finale" is a touching episode that really shows how much everybody cares about Raymond and the kind of family the Barone's are. For faithful viewers who have been watching the family for nine years, we've come to see the interesting and neurotic family dynamic. At times they may seem angry, unhappy, and/or jealous with each other, but at the heart, they care about each other. Throughout the series' nine seasons, there have been episodes with heart warming moments (like Frank expressing his love for his boys or Marie, Robert and Ray bonding, etc.), but nothing like the series finale. It was a nice way to end the series.

In "Finale", Raymond learns he has to undergo a routine operation. During Ray's operation in the waiting room, a nurse informs the family there are post-operation complications, which set Debra, Robert, and Frank into emotional upheavel (Marie was out of the room). Almost immediately after, the doctor comes out and informs them everything is fine. Afterwards, Debra, Robert, and Frank agree to keep what happened a secret from Ray and Marie. And as they try to go about their lives, they each come to realize what is important, each other.

Overall, I really enjoyed the series finale. I thought it was a great episode with a solid combination of heartwarming material and comedy. I also thought the episode gave the series a kind farewell. With that said, despite I enjoyed the episode I do not think the series finale is a worthy investment. If you are already planning on purchasing all of the season sets, season nine is not far off the horizon (I am estimating based upon past season releases) and it is almost pointless to purchase this DVD for a single episode. However, if you are a casual viewer, it is not a bad purchase. Putting the recommendation somewhere in between there, I give it a rent it recommendation. It is a fun episode, but not worth it if you are planning on purchasing season nine when it hits DVD. 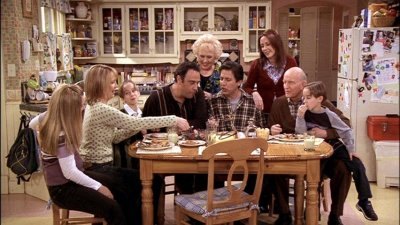 
Video:
The video for "Finale" is given in anamorphic 1.78:1 widescreen color. The picture quality is quite good. There are minor traces of grain and slight hints of edge enhancement. There is also some minor aliasing (not a lot, but still a few scenes with it). "Pilot" is, however, presented in 1.33:1 full frame color. There is a noticeable difference in quality between the two. The full frame transfer is much rougher and does not look nearly as clean as the widescreen transfer.

Audio:
The audio comes in the standard 2-channel Dolby digital stereo sound track in English. The sound quality is good with distinct and clear dialogue. The track typically sounds a little flat, but that's expected with dialogue driven tracks. There is also little advantage of taken of the stereo setup, with little distinction between channels.

There is no support of subtitles or closed captioning.

Extras:
In addition the series finale, this DVD release comes with series pilot. While I think it is nice additional content was included, I would have preferred more than the pilot. Most faithful viewers already have the pilot episode on DVD. On the other hand, casual viewers probably do not. Regardless, I think an episode commentary or some featurettes would have been a nice addition to the pair of episodes.

Final Thoughts:
If you have read any of my reviews of the Everybody Loves Raymond season sets, then you know I hold this series in high regard. It is one of my favorite sitcoms. I love the cast, the writing, the stories, and of course, Raymond. The DVD release Everybody Loves Raymond: The Series Finale presents the show's last episode, which is an enjoyable story with a mix of drama and comedy that gives the show a nice final farewell.

However, despite my praise for the series finale, I am not as excited about the concept of the "series finale" on DVD as I am about the show. If you are planning on purchasing the season sets, then there is no reason to purchase this DVD. It has no additional extras to speak of, and in the near future when season nine is released on DVD, you will have it on DVD. However, for casual viewers this is a fine purchase that comes with the beginning and the end of a wonderful series.