Adventures of Chico and Guapo: The Complete First Season, The 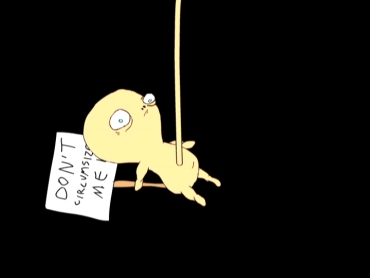 Just one of many MTV programs that isn't a music video, The Adventures of Chico and Guapo somehow managed to sneak in through the back door. Highly reminiscent of fan favorite 1990s classic Beavis and Butthead, Chico and Guapo centers around two dim-witted young adults who stumble through social situations and comment on television. Also like B&B, the episodes themselves are comprised of several five-minute shorts and intercut with said commentary. The environment of choice for Chico (tall, bald) and Guapo (short, fat) is Mr. Angelo's Recording Studio in New York City, where the two "work" as janitors.

Both are of Hispanic descent, hailing from Puerto Rico and the Dominican Republic, respectively. Voiced by funnyman Orlando Jones (Evolution, The Time Machine), their dialogue is fast, furious and often hard to understand. Supporting characters are painted with equally broad strokes, from Concépcion Rodriguez (the large-bottomed Hispanic receptionist) to Cézar (a mentally-challenged music producer, also Chico's cousin). Seen above, "The World's Most Talented Fetus" struts his stuff. Proceed with caution, folks.

Music, of course, remains a partial backdrop to the misadventures. Plenty of popular recording artists, past and present, are parodied in various shorts---"The Gelatinous F.A.T." (below left) and "Pariah Scary", for example---though the names alone should tell you these caricatures don't try too hard. The aforementioned "TV Commentary" is exactly what it sounds like: Chico and Guapo offering their opinions on a variety of shows, as the channels change almost as fast as their gums flap. Both elements---as well as just about every other segment of the series---often rely on high school humor to maintain the "edge" that MTV struggles to keep. Here's the problem: it's not as subversively amusing as Beavis and Butthead or any other highlights from the network's history of animation. Though you'll certainly get an occasional chuckle out of Chico and Guapo, most viewers will wish they'd simply rerun Aeon Flux or The Maxx instead (NOTE: the latter really, really needs to debut on DVD already).

Even so, those who can't help but find The Adventures of Chico and Guapo gut-bustingly funny should enjoy this 2-disc collection of the brief first season. All 8 unrated episodes are presented here in their original format on Disc 1, while an entire disc of bonus features is thrown in for good measure. The technical presentation, though undoubtedly low-budget, preserves the material perfectly. Though I can't say I disliked Chico and Guapo completely, it's certainly not prime "blind buy" material. With that said, let's take a closer look, shall we? 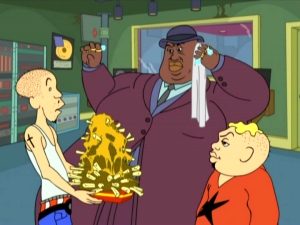 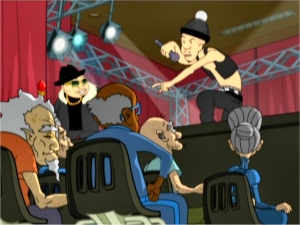 As expected, these 8 episodes are presented in their original 1.33:1 aspect ratio and look fine. Colors are bold and bright, while image detail and clarity are about as good as the source material will allow. Digital problems, such as edge enhancement and combing, can be spotted along the way but are kept to a minimum. The English 2.0 Stereo mix is basic but satisfying, offering a lively atmosphere and clear dialogue (so to speak). No subtitles have been provided, though this release supports Closed Captioning during the main episodes.

The appropriately-themed menu designs (seen below) are simple enough, offering easy navigation and a clean layout. Each episode has been divided into several chapters, while no discernable layer change was detected during playback. This two-disc set is housed in a pair of slim black cases and tucked inside a colorful glossy slipcover. No inserts have been included and, unfortunately, no episode descriptions are printed anywhere on the packaging. 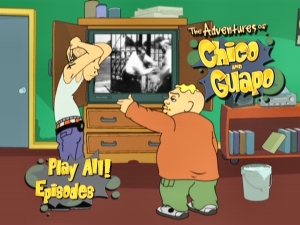 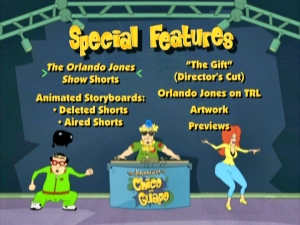 Bonus Features
Confined to the second disc, The Adventures of Chico and Guapo is granted a few decent extras that fans should enjoy. First up to bat is a collection of Animated Shorts from "The Orlando Jones Show" (16 clips, 27:18 total), nearly all of which are previously unaired. This appears to be where C&G got their start, though most of these crude shorts are more of a curiosity than genuinely worthwhile. Another bonus short is also included: "The Gift" (2:28), presented as a director's cut---and it obviously ups the gross-out factor, so consider yourselves warned.

Next up is a gallery of Animated Storyboards for several deleted and aired shorts (self-navigating, 36:04 total), presented in rough pencil form, as well as an interesting Art Gallery with early sketches, finished character drawings and the like. Closing things out is a promotional clip of Orlando Jones on MTV's "Total Request Live" (3:07), as well as a selection of Previews for other MTV releases. Overall, not a bad assortment indeed.

It's certainly an acquired taste, so even those who enjoy crude, goofball animation in the vein of Beavis and Butthead should approach The Adventures of Chico and Guapo with caution. No one's expecting this series to have the same staying power as Mike Judge's classic creation, as often times it simply seems like it's trying too hard to push the envelope. MTV's DVD presentation is simple but should appeal to fans of the show, offering a good technical presentation and an entire disc's worth of bonus material. The asking price is right on par---if not a bit high---for such a short season set, so only Chico and Guapo veterans will want to pick this up immediately. Everyone else should dip their toes in the water before jumping in. Rent It, or simply catch a re-run on MTV2.