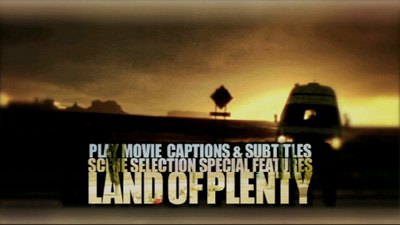 Wim Wenders (Wings of Desire, Don't Come Knocking) is at his best when he makes movies about the connections that human beings make between one another. Sometimes people come together for reasons that are beyond their control, pushed by things larger than they are, both literally and metaphorically. Though Land of Plenty, his under-the-radar 2004 picture about post-9/11 anxiety, sets its sights on bigger issues, it really finds its voice in the interactions of two people and how their near-opposite viewpoints meld into a more nuanced understanding.

John Diehl ("The Shield") plays Paul, a USASF agent who is driving around Los Angeles looking for possible terror suspects. His van is set up as a surveillance unit, but his methods consist mainly of collecting vials of discolored water, examining unattended packages, and trailing anyone wearing a turban. It's pretty obvious that he's probably not on any official business, that instead he is on his own personal mission. On the day he sees Hassan (Shaun Toub, Crash) carrying around some boxes of detergent, he thinks he's found a sleeper cell. Only, the trail is going to lead him to much more than he expects and not at all what he suspects.

The day in question is September 12, 2003, two years after the 9/11 attacks, and it just so happens that it's the same day Paul's niece Lana (Michelle Williams, Brokeback Mountain) is returning to the U.S. after a couple of years in Palestine. Since her mother passed away, her Uncle Paul is her only living blood relative. Raised by international do-gooders, she settles in L.A. to work in a homeless shelter and find Paul so she can deliver her mother's final letter to him. She's a caring girl, possessed of a great empathy for the world's troubles. The poverty of the City of Angels breaks her heart, and she soon tries to befriend everyone who comes through her bread line. That includes Hassan.

When Hassan is killed on the street outside the mission, Paul and Lana are forced into making the connection he's been trying to avoid and she's desperately tried to make. Lana wants to deliver Hassan's body to his brother in Death Valley, and Paul believes that's the hub for the cell he is convinced is going to attack America next. Once they reach their destination, both will have to confront what is happening to them. 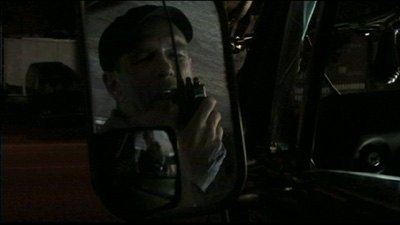 John Diehl really proves himself to be an actor of a much greater caliber than he has shown in his many character roles. Paul is a Vietnam Vet who could use a few screws tightened. At one point, he spies a larger, unknown object hidden under a tarp, and as he takes a photo of it, he says, "If I were paranoid, I'd think that was suspicious." It's the kind of simultaneous self-awareness and self-delusion that keeps a guy like Paul thriving. He has the ability to see a terrorist plot in everything. It's amazing how when you want the world to be one way, the proof you need keeps showing up in front of you. Out in the desert, however, Paul is forced to face the reality of his quest, and this is where Diehl shines. By that point in the movie, it's getting a little tough to stomach Paul's crazy commando routine, but as the cracks begin to show, Diehl manages to engender sympathy for the man. He steps out of the haze slowly. It's not one epiphany, it's a build-up of events. Eventually, there is too much proof, he can't ride on the hope of suspicion. Tragically, Wenders lets his actor down in the final stages of the crack-up, editing a Vietnam flashback while wearing gloves woven with cliché; even so, Diehl maintains the emotion.

Michelle Williams is also excellent. Her wide eyes take everything in, and the prayers she mutters to keep herself from crumbling under the emotional weight ring true. She is gentle with Diehl, indulging his paranoia while still being open and trusting that he is who he says he is. The supporting cast is very good, as well, especially Wendell Pierce as the preacher who runs the L.A. mission. Fans of HBO's "The Wire" will appreciate Pierce stepping away from Bunk, the gruff homicide detective, and playing a man of genuine compassion, but who also still has his eye on everything.

Land of Plenty manages to maintain its focus for the bulk of the movie. It's not overtly political or damning of any one side. Wim Wenders has picked his subjects carefully, letting them embody specific American points of view without taking them to such extremes that they are overly critical or cartoony. Once Paul comes out of critical mass, however, Land of Plenty falls out of the grip of that even hand. The understanding that Paul and Lana come to during a conversation after Hassan's funeral rings hollow. The platitudes of their crucial exchange set up the poetic image of the final shot, but it doesn't feel like the point that Wenders was originally leading us to. It almost comes off as too simple, too hippy dippy, when up until then everyone had worked hard to keep Land of Plenty from such easy sentiment. It's the wrong time for Wenders to lose his nerve, because had he held steady, Land of Plenty could have been so much more than what it became. 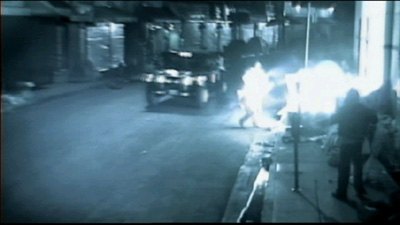 Video:
Land of Plenty is shown in letterbox preserving its original aspect ratio and enhanced for widescreen TVs. The picture is sharp, showing the various subtleties of digital video, particularly the softness of nighttime scenes.

Sound:
A 2.0 English mix is mainly pretty good. There are occasional back speaker effects that come off nicely.

Extras:
A ten-minute piece called "Making of Land of Plenty" is the regular sort of promotional fluff. Interviews with Wenders, Williams, and Diehl make up part of it, as do a couple of very short shots of on-the-set action, but most of the feature is comprised of scenes from the movie.

There are eight deleted scenes, none of any great consequence. Some are just extensions of other scenes, but there is also a complete sequence of Michele Williams viewing a homeless camp under a bridge and her desire to help clashing with her fear.

Finally, the audio commentary by Wim Wenders is thorough and chock full of details about the production, beginning with the general inspiration for the movie. When funding was pulled on Don't Come Knocking at the last minute, Wenders decided to scratch his film itch anyway and brought the Land of Plenty production together in a matter of weeks. It was shot on DV in sequence, and the impetus for it was trying to explore the mentality of some Americans in the early stages of the Iraq war. From there, he talks about various things, including different days of shooting, the speed with which they shot (up to 60 set-ups a day), his personal feelings about religion, and trivia like where he got the footage of Palestine that Michelle Williams watches on her computer or that he wrote the movie for the actress despite having only met her once. There is plenty of discussion of the digital technology used, which will be interesting for anyone curious about DV. The question I really wanted answered is even answered: yes, that's a real hummingbird in one of the later scenes.

Be warned, though: Wenders has a quiet way of speaking that may start to lull you to sleep. Don't let it happen. Stay awake, because he has good things to say.

FINAL THOUGHTS:
Land of Plenty has some good ideas and some great performances, but it craps out just at the moment when it should have burned brightly. Wim Wenders wanted to make a movie that peers in on what is happening in the minds of post-9/11 Americans, and for the first ¾ of the film, he pulls it off; unfortunately, in the final scenes, he takes an easy way out rather than hanging tough. Still, there is enough good stuff in the early parts of Land of Plenty that I still feel I should rank it as Reccommended. It's a good DVD as far as packaging is concerned, and even if the film's answers are trite, you will be intrigued by its questions. 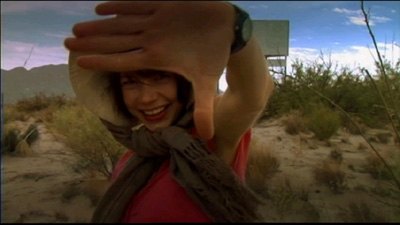