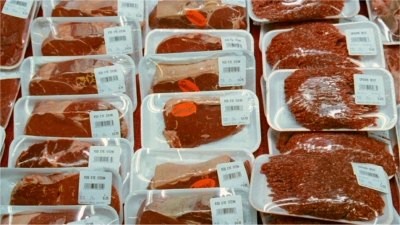 The horror-comedy genre isn't exactly a new one, so it's getting increasingly harder to break the mold. Though it doesn't quite bring anything new to the table, James Gunn's Slither (2006) plays its cards right, serving up an ample amount of slime, scares and self-deprecation. It's more of a humble ode to the genre than a stand-alone effort, creating an obviously fictional universe that's easy enough to get lost in. Boasting an assortment of tongue-in-cheek characters and an ample amount of disgustingly disturbing monsters, Slither should appeal to anyone who enjoys great green gobs of over-the-top schlock. It's not a perfect film, but it's still a lot of fun.

All things considered, Slither isn't quite an equally balanced horror/comedy, though it's certainly got elements of both (among other things). Fans of The X-Files should instantly be reminded of quirky, off-center episodes like "Bad Blood" and "War of the Coprophages", while Troma disciples should also feel right at home. From start to finish, Slither feels completely like a film made with horror fans in mind, dishing out non-stop nods to classics like The Thing, Rosemary's Baby and David Cronenberg's Shivers. Still, Slither adds up to more than the sum of its parts: though fans will see close similarities to older staples like Invasion of the Body Snatchers, Tremors, Night of the Living Dead and especially Night of the Creeps, Gunn's film manages to leave its own stamp on the genre. Jokes don't come fast and furious, but the humor is certainly there.

With a well-rounded series of performances by the capable cast, Slither never manages to take itself too seriously. Nathan Fillion (Firefly) is perfectly cast as the laid-back, deadpan sheriff Bill Pardy, while Michael Rooker (Henry: Portrait of a Serial Killer) does a fantastic job as the meat-hungry Grant Grant. Supporting roles are filled nicely by Elizabeth Banks (The 40 Year-Old Virgin), Gregg Henry (United 93), Tania Saulnier (Caitlin's Way) and Gunn's wife, Jenna Fischer (The Office), creating a caricatured collection of citizens that never strays too far over the top. The small-town setting of Wheelsy, South Carolina also gives Slither an appropriately closed-off atmosphere that suits the story well. 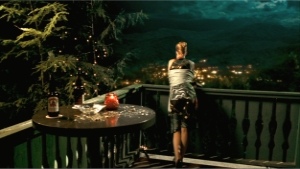 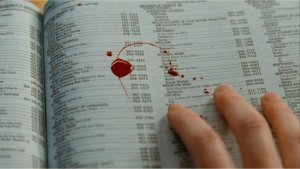 Also of note are the excellent special effects, a potent mix of practical handiwork and CGI that gives Slither a convincingly campy backdrop. There's more gross-out than actual gore on display (read: slime > blood), though there's no shortage of victims nonetheless. Between a few exploding heads, flesh-eating zombies and pounds of rotting meat, even veteran horror fans may feel a bit queasy. Again, Slither is saved by the fact that it serves up these disgusting visuals with a knowing wink. It may not win any awards for originality, but it's a fun escapist flick that horror fans should enjoy.

If Slither has one problem, though (aside from a small amount of trouble balancing a few genres), it's the pacing. Clocking in at just over 90 minutes, it admittedly takes a bit too long to get going---and once it's over, you'll probably wish that the first 60 minutes were more like the last 30. The infamous "bathtub scene" (depicted on the front cover) is a good example of this, as a completely new character is introduced much too late in the film. It's a great scene in its own right, but feels awfully out of place when viewed as part of the bigger picture. Even with the slower introduction, though, Slither should entertain those looking for a fun, linear story that delivers laughs and thrills in nearly equal doses.

Presented on DVD by Universal, Slither has been blessed with a terrific DVD presentation that defies the film's disappointing box office performance. The film itself has recieved a rock-solid technical presentation, supported by plenty of fun, free-wheeling bonus features that fans should certainly enjoy. All things considered, it's one of the most well-rounded one-disc releases you're likely to stumble upon. Let's take a closer look, shall we?

Presented in its original 1.85:1 aspect ratio and enhanced for widescreen displays, Slither features a natural, slightly stylized color palette and a clean, clear image. Nighttime scenes occasionally drift into murkiness, but it's a satisfying transfer that shouldn't disappoint fans. Additionally, no major digital problems (edge enhancement and combing, for example) were spotted along the way, rounding out the visuals nicely.

The Dolby Digital 5.1 Surround mix (also available in Spanish or French dubs) is equally impressive, boasting fine clarity and a convincing atmosphere. English, Spanish and French subtitles are available during the main feature, as well as the included bonus material. It's also worth noting that an HD-DVD/DVD combo disc is also due for release the same day, but this standard release of Slither certainly holds its own weight. 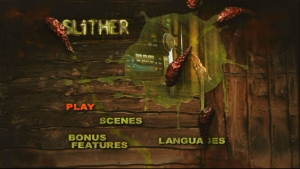 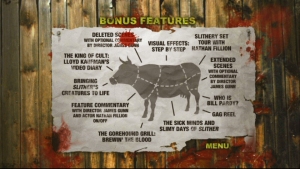 The basic animated menus (seen above, presented in 1:78:1 anamorphic widescreen) feature a fun, campy design and smooth, simple navigation. This 96-minute film has been divided into 20 chapters, while no apparent layer change was detected during playback. This one-disc release is housed in a black keepcase and includes no inserts.

Luckily for fans of Slither, this disc comes packed with plenty of extra goodies! First up is a feature-length Audio Commentary with director James Gunn and star Nathan Fillion---and while you'd almost expect a film like Slither to have a complete group commentary, both contributors do a fine job of keeping things moving. Though Fillion is actually recorded via telephone, the audio sounds excellent and he manages to play off Gunn very well. It's obviously a more laid back track than a technically-minded tour de force, but fans of the film should enjoy hearing their thoughts.

Presented separately are a series of behind-the-scenes featurettes, leading off with "The Sick Minds and Slimy Days of Slither" (10:03, below left), a relatively basic but entertaining piece recording during the film's production. Featuring plenty of interviews and casual footage with the cast and crew, it's a great way to catch up with the folks not represented on the audio commentary. Also here is the "Slithery Set Tour with Nathan Fillion" (4:43), a more impromptu clip with plenty of amusing moments. For special effects fans, "Visual Effects: Step by Step" (5:02, below right) takes us through a series of scenes as digital tricks are gradually added. Also here is "Bringing Slither's Creatures to Life" (18:04), a like-minded featurette with plenty of grisly footage and interviews with the effects team. You'll also enjoy "Gorehound Grill: Brewin' the Blood" (3:34), a fun step-by-step demonstration of how to make your own batch of fake blood (yummy!). 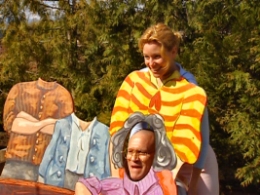 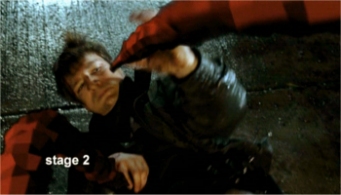 Next up are a series of Deleted Scenes (8 clips, 9:58 total), including "Mrs. McCammon's House", "Grant at Work", "Grant/Starla Dinner Scene #1", "The Meat Filing Scene", "Grant Takes Dog Away", "Grant/Starla Dinner Scene #2", "Outside 'Deer Cheer' Lodge" and "Starla Zones Out in Classroom", all with optional commentary by director James Gunn. On a similar note is a collection of Extended Scenes (4 clips, 7:15 total), including "The Butcher Shop", "Bill and Starla on Lodge Balcony", "Grant at Brenda's House" and "Bill and Kylie Outside Police Station", also with optional commentary by Gunn. A few interesting bits and pieces can be found here, but Gunn does a good job of explaining why it was left on the cutting room floor. Here's hoping they don't bother with an "Unrated" double-dip in six months.

Three additional featurettes are also included, leading off with "The King of Cult: Lloyd Kaufman's Video Diary" (8:59), a brief piece hosted by Mr. Troma himself. Things start out a bit slow, but Kaufman proves to be a good host during this low-key "morning in the life of" tour through his trailer, hair and make-up, and an impromptu rehearsal for his single line of dialogue (which was, unfortunately, cut from the final version!). Also here is the super-secret featurette "Who is Bill Pardy?" (5:14, hidden in plain sight), consisting of more on-set antics with the charismatic Nathan Fillion. Last but not least is an amusing Gag Reel (8:12) full of bloopers, blunders and technical gaffes.

With nearly 90 minutes of bonus material (plus the audio commentary), fans should certainly find this one-disc release satisfying. All supplements are presented in a 1.33:1 aspect ratio with non-anamorphic widescreen film clips; thankfully, they're also paired with English, French and Spanish subtitles. Other than the film's theatrical trailer, Universal has covered all the bases very well...especially since Slither didn't exactly perform well at the box office.

Whether you're a die-hard follower of horror-comedy or a Firefly fan needing another Nathan Fillion fix, James Gunn's Slither is an entertaining film that doesn't take itself too seriously. Universal's DVD presentation does the film justice, combining a solid technical presentation with an ample supply of interesting bonus material. It may not reach the heights of the genre's earlier classics, but there's no doubt that Slither sure has fun trying. Firmly Recommended.