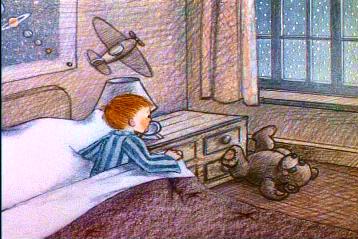 I have to slap myself on the wrist here and consider it blasphemous that I haven't seen this title since I was a little boy. The Snowman is a holiday classic that I felt, unfortunately had been overlooked due to the 'made for money' television Christmas classics. Don't get me wrong, I certainly enjoy riding along with Rudolph and taking a train ride with Frosty. They were clearly the product of Christmas marketing that were fun and wholesome enough to become staples of the season every single year.

The Snowman isn't flashy or even jazzed up with catchy Christmas jingles that your kids and their kids are sure to drive you nuts over singing on an average of eighty times a day. This twenty seven minute feature was an Academy Award nominee for Best Animated Short Film in 1982, and it got that nomination without all the gimmicks.

The story takes us through a whole palette of emotions that warm us up in all the right spots you want to have come alive during the holidays. A young boy awakes one morning to see everything outside blanketed in snow. Typical for a young boy, it's 'act now and ask questions later' as he throws on his clothes and runs outside to play. He builds a snowman out in his imaginative winter wonderland and before he knows it, he's back in bed again for the evening.

In the middle of the night the boy finds his snowman alive! From that point on we're treated to a delightful journey that warms the soul and brings smiles all around as we can't help but feel we've been taken back to our own childhoods.

I'm usually up there on the 'sarcasm' scale and say what I feel at the time are witty remarks, only later to feel a bit foolish once I'm the only one who found my comments to be amusing! Despite my usual failure though, my wife and I had a good chuckle as I let out a 'happy birthday' in the voice of Frosty once the snowman in this animated short came to life. I know this might feel like a bit of a detour from my review but it's actually quite relevant and if you've ever seen this short before, you can probably relate as to why. This title just brings the kid out in me and reminds me of all the things that had become a part of my experience of the holidays throughout life.

The Snowman is done entirely without words, minus the introduction. The artistry is done to look masterful in sketching and filled in with crayons and colored pencils. A lot of care had been placed into this film. The entire time you feel like you're viewing a book come to life, a quality very hard to find today. The fact that it's entirely speechless makes it even more astonishing. We get to see an adventure from a little boy's perspective that I dare say will tap into every single one of its viewers and remind them of their own childhood, reminding them of the imagination they once had.

I don't know how many times I've said to myself growing up that I'd never lose my imagination and I'd always stay the same. Then, I grew up! It's a fact of life and there's usually not a way around it, but pieces such as The Snowman deserve their place in holiday spirit as they're a refreshing way to remind us of good memories and fun times. 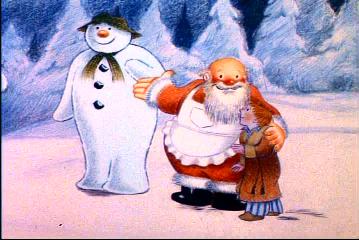 This is an animated short from 1982 so it doesn't look one hundred percent. There's some film marks here and there, once or twice in a place where it's a little distracting for just a second or two. There's grain but I'm pretty sure it's grain from the film. There's snow flying everywhere all over the place, and a lot of changes in the background occurring from the frame-by-frame storybook coloring The Snowman was trying to accomplish. This in mind, I don't see digital artifacts showing their ugly heads in any places, and the color looks absolutely phenomenal. There are times where the picture appears to be soft, but again this is due to the style of the artistry. It was made that way. As you can see in the screen grabs I've taken for this review, it certainly retains that storybook feel with its nice 4:3 transfer. The only way it could have looked any better would be if a huge restoration process took place to remove the old film marks, but even they give the film a sense of its old charm.

You get an English stereo track, or a French one. The sound certainly sounds very nice for stereo as the entirety of this feature relies on the music to help tell the story almost as much as what's going on up on your television screen. I wouldn't expect any truly fancy mastering to go on with this track.

There's really nothing here besides a few trailers. These solely include Creature Comforts: Season 2, Stuart Little 3: Call Of The Wild, and It's A Big, Big World. At least some sort of documentary or memories of the making of this feature could have been nice, even at five minutes.

The Snowman has awoken something inside of me that I haven't felt for some time, and isn't that what the holidays are all about in the end? Yeah, I know there's all that 'giving' stuff and I'm sure 'commercialism' is pretty high up there as well. Color me crazy but I'd much rather sit at home and curl up with a loved one and watch something like this close to Christmas than try to drive on a sheet of ice to inspire holiday emotions at a Christmas Tree Shop. The Snowman will warm you and touch you. For anybody who's looking for a decent DVD collection of holiday classics and you already own the Rankin and Bass animated classics, my humble opinion is that no Christmas collection on DVD would be complete without this title. 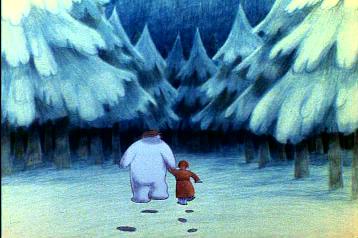