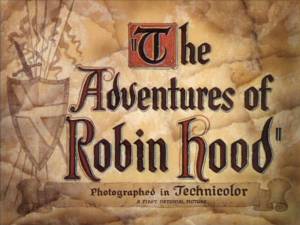 The Movie:
After almost 70 years and countless subsequent adaptations of the same historical legend, Warner Bros.' 1938 production of The Adventures of Robin Hood still remains the definitive filmic telling of the Robin Hood story and the benchmark against which all tales of swashbuckling adventure are measured. The movie has action and intrigue, intrepid heroes and beautiful maidens in distress, volleys of flying arrows, thrilling swordplay, and derring-do aplenty. It's the template by which all epic adventure films are set, and even if it's been surpassed over the years by bigger and (sometimes) better spectacles, the movie holds up as an entertaining thrill ride as well as a charming piece of nostalgia.

Errol Flynn stars as the dashing, do-gooder bandit, and makes it his signature role with an intriguing blend of feminine softness and haughty masculinity all wrapped up in one package. The radiant Olivia deHavilland is at his side as Maid Marian. The villains are played by Claude Rains as the cruel Prince John and Basil Rathbone as his right hand henchmen Sir Guy of Gisbourne (a position often filled in many versions of the story by the Sheriff of Nottingham, a character reduced to Gisbourne's subordinate here). Even amidst all these larger than life personalities, every bit as big a star of the show is its gorgeous Technicolor photography, a riot of impossibly vibrant hues that leap from the screen as spryly as Robin leaps across castle walls and trees. 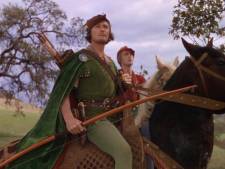 All the familiar elements of the tale are here. In the absence of their beloved King Richard the Lionhearted, who ventured off to fight in the Crusades, the English people have been subjugated under the will of his power-hungry brother Prince John. The only man who will fight for their rights is the valiant Sir Robin of Locksley, a master swordsman and unrivaled archer whose tongue is as sharp as his blade. With the help of his band of merry men including Will Scarlett, Friar Tuck, and John Little, Robin will (you know the drill by now) steal from the rich and give to the poor. He'll also woo the at-first sheltered and skeptical Marian, and lead the people in a stand against their oppressors. Many arrows are launched, swords are clanged, and castle battlements are climbed in the process.

The Adventures of Robin Hood features an aggrandized, theatrical style of acting no longer in favor and many flamboyant costumes that I suspect must have always seemed a little silly (how practical could it be to prance around through the forest in bright green tights?). Its pacing and action choreography are also a little slack by modern standards. I don't think I've ever understood the plot turn in which Robin allows himself to be captured during the archery tournament and has to be rescued later by his men; he knows it's a trap and willfully walks right into it, for what purpose I have yet to deduce. Nevertheless, the film is a grand entertainment, just as enjoyable now as the day it premiered. The production by William Keighley and Michael Curtiz is impressively lavish and fantastical. This is a classic film, but not the stuffy type you slept through in school. Its makers may have all passed on, but the movie is as vibrant and alive as ever. In the ensuing years there have been many other versions of this story put to film, some redundant, some revisionist, even some animated, but none have yet topped this Adventures of Robin Hood.

The HD DVD:
The Adventures of Robin Hood debuts on the HD DVD format courtesy of Warner Home Video.

HD DVD discs are only playable in a compatible HD DVD player. They will not function in a standard DVD player or in a Blu-Ray player. Please note that the star rating scales for video and audio are relative to other High Definition disc content, not to traditional DVD.

Video:
The Adventures of Robin Hood HD DVD is encoded on disc in High Definition 1080p format using VC-1 compression. The movie is presented in its theatrical Academy Standard aspect ratio of approximately 1.37:1 with pillarbox bars on the left and right sides of the 16:9 frame. The opening credits and prologue text have been additionally windowboxed with bars on all four sides, a process I'm not particularly fond of, but the windowboxing goes away once the movie proper starts. 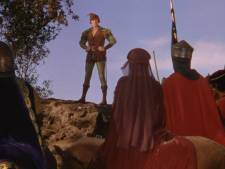 Sourced from the same Ultra Resolution transfer as Warner's Two-Disc Special Edition DVD released in 2003, this is a truly remarkable restoration for a film from 1938. Completely rejuvenated to its original Technicolor glory, the film elements have been scrubbed clean of all the dirt, grime, and physical defects usually seen on movies from the era. Colors sparkle like they haven't in decades, and flesh tones are never less than robust. The clarity of this image is just terrific, rivaling productions from recent years, much less something nearly 70 years old.

Film grain is frequently visible, which should be no surprise, but it's been well digitized to retain the original celluloid texture and isn't noisy at all. Nor does it ever overwhelm or obscure the image. This is the original photographic grain, not age-related degradation. The picture exhibits quite good sharpness and detail, though the movie was shot in a sometimes gauzy, romantic style, and some of the wide shots may look a bit soft in comparison to the better close-ups. The new transfer also exposes the day-for-night scenes as patently artificial, a detail often obscured by the poor quality of most prints over the years.

The DVD edition looked excellent for that format's potential, but the HD DVD steps things up to that next level of detail, clarity, and precision where you can see even minor source-related defects. There's a brief color shift at approximately the 1 hr. 23 min. mark, which is there if you strain to look for it on the DVD but barely visible, yet quite apparent here. That should be taken as a compliment to the power of the High Definition resolution, not a knock against the transfer. This disc looks wonderful.

The Adventures of Robin Hood HD DVD is not flagged with an Image Constraint Token and will play in full High Definition quality over an HD DVD player's analog Component Video outputs.

Audio:
The movie's soundtrack is provided in Dolby Digital Plus 1.0 format. Audio technology in 1938 was of course quite primitive by current standards. The disc's soundtrack cleans it up as much as possible but can't overcome some of the limitations inherent to the source. Dialogue sounds thin and the music is a bit brittle, but the track is clear and has only a minimal amount of hiss. There isn't much dynamic range, and obviously the mix is limited to mono, but this is about as good as The Adventures of Robin Hood has ever sounded. 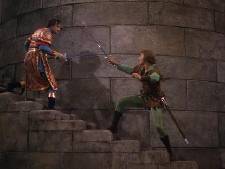 Extras:
The disc automatically opens with a lengthy HD DVD promo that can fortunately be skipped but is a nuisance. The interactive menus are accompanied by annoying clicking sound effects for every selection that can be turned off if you desire (and I recommend it).

All of the bonus features on this HD DVD title are recycled from the DVD edition and are presented in Standard Definition video with MPEG2 compression, except for the Merrie Melodies/Looney Tunes cartoons which have been remastered into full 1080p HD with VC-1. Almost all of the supplements from Warner's Two-Disc Special Edition DVD have carried over, and they amount to quite an extensive handful that will take the better part of a day to dig through. The organization of the features in the menu system is different on the HD DVD than the DVD and I don't necessarily agree with all of the changes (why aren't the Looney Tunes grouped together anymore?), so the way I'm going to list them off here may vary a bit from where they're actually found on the disc.

As far as I can tell, the only things lacking from the DVD edition are some awards and cast & crew info in text format. They're certainly not much of a loss. The DVD's fancy packaging is missed, however. 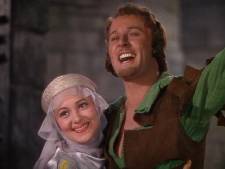 Final Thoughts:
You've got to love Warner Bros. for digging into the breadth of their catalog when releasing titles on HD DVD. The studio has made it their mission to prove that High Definition benefits more than just action flicks and sci-fi pictures. Classic movie lovers should be thrilled with this release of The Adventures of Robin Hood, which features an amazing restoration for the movie that looks terrific in HD, as well as an astounding wealth of bonus features. Warner even went to the extra effort of restoring the Merrie Melodies/Looney Tunes cartoons into HD quality significantly better than the same pieces on the DVD edition. This is truly a package for collectors and easily merits our highest DVDTalk Collector Series rating.