Image // Unrated // September 26, 2006
List Price: $19.99 [Buy now and save at Amazon]
Review by Stuart Galbraith IV | posted October 24, 2006 | E-mail the Author
Gene Autry's first Western for Republic Pictures - indeed, it's regarded as the very first "singing cowboy" Western ever - is one of his best, a very entertaining programmer that crams a lot of entertainment into its short-and-to-the-point 58 minutes. It's more a Western with music than a typical Gene Autry Western; although the basic components for the dozens of musical Westerns Autry would subsequently make for the studio are on display, it's pleasingly rough around the edges, without the formula blandness that would quickly permeate his films. 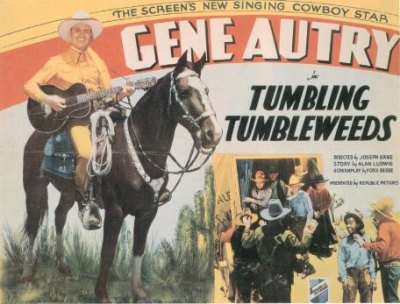 That old B-Western standby of ranchers vs. "nesters" drives the plot, such as it is. Having been kicked off his father's expansive ranch five years before, cowboy singing star Gene Autry (Gene Autry) returns to his hometown as a member of Dr. Parker's Medicine Show. Resting at a shack en route, Gene and his pals - Dr. Parker (George Hayes), Eightball (Eugene Jackson), Shorty (Frankie Marvin), and Smiley (Smiley Burnette) - are surprised by an old friend of Gene's, Harry Brooks (Cornelius Keefe), who's wounded and wanted for murder. Gene can't believe that his old pal could've done such a thing, hiding him when a posse turns up prepared to string him up then and there.

Gene begins to regret his decision when he learns the man Harry is accused of killing is none other than his own father, but Gene's former girlfriend, Janet (Norma Taylor), who's now married to Harry, talks Gene out of turning the man over to the mob. But then who's responsible for his father's death?

Tumbling Tumbleweeds was a bona fide phenomenon in rural America; its influence cannot be overstated. It remains one of the most profitable movies ever: it cost just $12,500 (a pittance even by 1935 standards) but reportedly grossed around $1 million. Watching the film even today it's easy to see why. Though Gene himself is stiff and inexpressive (and overly made up in this picture with too much eye-liner and such, as if Republic was trying to make him look suave or something), the film is exciting in its plentiful action scenes, while its musical numbers are unusually well-integrated with several Western standards, including "Ridin' Down the Canyon," "That Silver-Haired Daddy of Mine" (which Gene touchingly sings upon learning of his father's death), and of course the title tune.

The picture abounds in lavish, under-cranked action. Despite its low budget, there's an epicness to some of the early range war fighting, while the stuntman (stuntmen?) doubling Gene earn their pay and then some with lots of running mounts and rough-riding. Several reviews of the film point out that this was former editor Joseph Kane's first feature; he'd go on to direct innumerable Autry and Roy Rogers movies, but perhaps more significantly the supervising editor on this was Joseph H. Lewis, himself one of the best lower-budget directors of the '40s and 1950s. In any case, whoever cut the film knew what he was doing. Action scenes move at a taut clip rare in 1935, while the good use of close-ups in the dramatic scenes and the musical numbers serves the actors and their characterizations well.

The film is also unusual for an Autry picture in that it's actually set in the historic West, kind of. A prologue alludes to this, and the film is fairly faithful to its setting except for the 1930s fashions and hairstyles most of the women wear.

Gene's awkwardness is apparent in several scenes, including one weird dialogue scene he shares with Sheriff Manley (George Burton). It's as if Gene was too nervous to make eye contact with Burton and remember his lines. The sequence is shot from several angles, but in none of them do the actors actually appear to be looking at each other, but rather at about 30-degree angles from one another.

The supporting cast is very good, however, including a beardless George pre-"Gabby" Hayes (he does sport a walrus moustache, however) as the leader of the medicine show: "Where's the nearest waterhole so I can mix up a batch of dope?" he asks. Hayes is a delight in a characterization far removed from his more familiar screen persona, though little glimmers of "Gabby" are visible. Longtime Autry sidekick Smiley Burnette's role is somewhat smaller and, though comical, is less the lowbrow characterization than usual. Jackson does an amusing dance number that's part of the shill.

Tumbling Tumbleweeds, (probably) restored to its original running time - a shorter, 54-minute cut version also exists - looks just great, not quite brand-new, but way above average compared with other extant films of this vintage. The audio is likewise clean and without damage or distortion. As usual with these Autry titles, credited with the restoration are Autry Entertainment and the Autry Museum, The Western Channel, and RPG. There are no subtitle options.

As always, Gene Autry Entertainment crammed their DVD with an impressive array of Criterion-level supplements. First is another Reminiscing with Gene Autry and Pat Buttram at the Melody Ranch Theater from 1987, with the pair talking about, among other things, the origins of Champion (Gene's horse, a star in his own right) and how Autry came to hire Smiley Burnette. It runs 12 minutes.

Don't Touch That Dial! Gene Autry is On the Air is a 29-minute episode of radio's "Doublemint Melody Ranch" that originally aired on January 28, 1940 and which features such diverse guests as Pappy Cheshire and His Champion Hill-Billys and First Lady Eleanor Roosevelt. The show is presented over animated ad art and stills from the movie.

The usual wide assortment of colorful and expertly presented Production and Publicity Stills, Poster Art and Lobby Cards, and the Original Press Kit make for another fine extra, though what's billed as Daily Production Reports are actually music cue sheets.

The late Alex Gordon provides Trivia and Movie Facts, which is actually a very good essay about the production that also puts it into historical context.

For its place in movie history, to say nothing of its entertainment value, Tumbling Tumbleweeds is a must-have for anyone that's a fan of classical Hollywood cinema, especially fans of movie Westerns. The restoration of the film's picture and sound elements is excellent, and the supplements superb. An unlikely but very definite DVD Talk Collector Series title.